Milwaukee Bucks Lineup Pyramids, Vol. 4 | Brandon Jennings is too left to be right

In the fourth edition of our Milwaukee Bucks lineup analysis series, the focus turns to point guard Brandon Jennings and his inability to use his right hand.

Share All sharing options for: Milwaukee Bucks Lineup Pyramids, Vol. 4 | Brandon Jennings is too left to be right

Milwaukee Bucks point guard Brandon Jennings has grown as a player since his rookie season, but it's very difficult to find a tangible area of his game where that improvement has manifested in his production or efficiency. The same criticisms from year one are valid today. He can't draw fouls, he takes too many tough, off-balance shots, he's far too streaky and he can't consistently create good shots for teammates. If you drill down into the numbers, he's always had trouble drawing fouls because he's always had an issue finishing at the rim.

At 6'1, craftiness is important when it comes to converting with big men protecting the paint -- ask Tony Parker, Kyrie Irving, Steve Nash, Eric Bledsoe, Chris Paul, Goran Dragic, Luke Ridnour, Ty Lawson, etc. etc. -- but Jennings can't get crafty because he's too predictable. His dependence on his left-hand is borderline unprofessional for a fourth-year starting point guard in the NBA. His version of an off-hand layup usually involves contorting his body and throwing the ball over his head with his left hand. It's been a source of frustration for fans, but it's starting to become a serious problem.

Perimeter defenders can take Jennings out of plays by shading him right. Big men can come up with controlled blocks when they wait for BJ to push the ball back to his left in the paint. Here's his shot chart for the 2012-13 season: 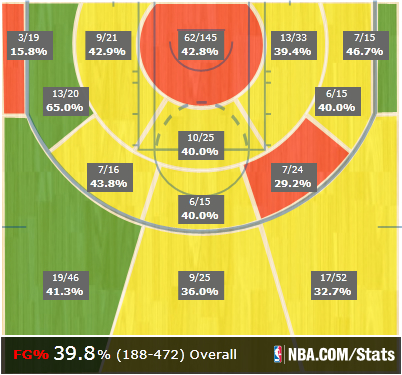 When it comes to converting in the restricted area, Jennings is 11.2% worse than the rest of his teammates (Bucks are otherwise 54.0% in that zone), and a whopping 13.7 behind the league average (NBA avg is 56.5%). Those numbers only scratch the surface of the real problem.

Jennings' inability to use right hand in traffic has turned him into a below-average half court player, which is why he fails to impact so many games during the course of the season. His success is often very situational. If his jumper gets hot, his inability to get to the rim against set defense is masked. If the Bucks are playing extremely well on defense, he gets fast break opportunities where nobody is around to challenge him at the rim.

This season I've noticed that Skiles has allowed his starting point guard to gamble for steals a bit more, and then leak out after challenging a perimeter jump shot to get an easy cherry pick layup if his teammates grab the defensive rebound and throw the ball ahead.

It's probably not a great strategy on the whole -- the defense gives up an extra 8 pts / 100 poss when Jennings is on the floor -- but it may be a necessary evil. It's probably the only thing that keeps Jennings' at-rim scoring numbers in the "vaugely terrible" category and out of the "OMG THE HORROR, THE HORROR" zone. As an experiment, I sorted through the video on MySynergySports.com for every Brandon Jennings layup opportunity this year (up to the Heat game), and here's what I found.

Those numbers speak loudly. The half-court conversion rate for Jennings is downright ghastly. It's impossibly bad, but it explains a lot about why he struggles so much to impact games. If he heads to the paint he's probably hurting his team, even if we factor in the possibility of an offensive rebound. It's not as if he's taking hard contact and missing these shots either, as more often than not he blunts the angle on his drive and fades away from a large defender to take a floating layup attempt at an impossible angle.

Is there any reason he can't develop a pro-caliber right hand? I can't think of a good one, but that transformation in his game will be the key to any "next step" the Bucks hope he might take. If they take away his opportunities to leak out while his teammates play 4-on-5, could they shame him into working on his right hand this summer? I'm not beyond hoping that happens, because I still think the franchise will make a long-term investment in Jennings this summer. In this edition Jennings clocked in with the worst net rating among all Bucks regulars, so it's not as if his body of work is worth boasting about at this point in the year.

In any case, here are the updated numbers for PER and lineups.

*Larry Sanders provides most of his value on the defensive end, and PER isn't great at capturing the defensive value of players, but the metric does take into account blocks, steals and rebounds. Sanders is now king of the mountain with an 18.4 PER, largely because he's blocking shots, getting steals, grabbing rebounds at the highest rate of his career and throwing down dunks on offense. As we've said since summer league, less is more with Larry.

*The Bucks are filled with slight above- and below-average talent, in case you didn't already know it. Skiles is giving a lot of minutes to his best players, at least according to this chart, but Marquis Daniels might be in line for a minute reduction now that his shooting has regressed and LRMAM is back.

*Ersan Ilyasova is almost up to league average! 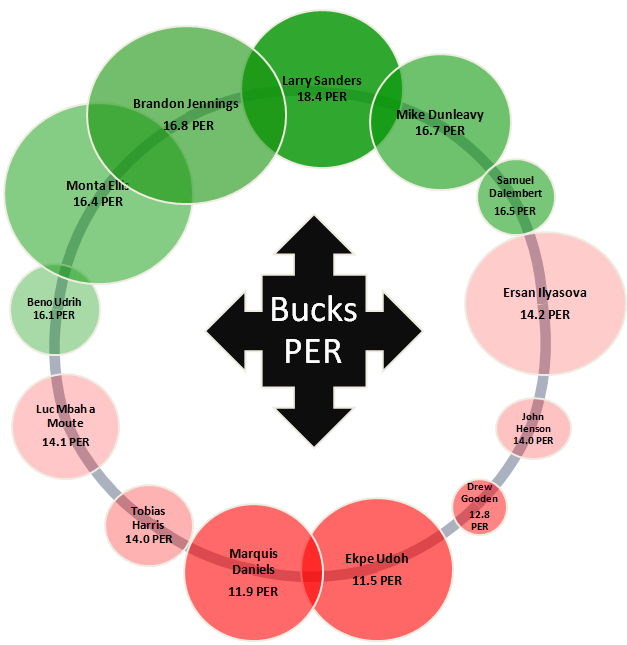 *Two weeks ago I wrote about Marquis Daniels, corner threes and the temporary shot in the arm that Daniels has provided for the Bucks. Well, things are quickly returning to normal. The Jennings / Ellis / Daniels / Sanders quartet is still the most effective four-man group -- it's the only four-man group with a positive net rating in the top-6 quartets -- but a poor offensive fortnight has pulled the group down. A 1-for-10 stretch for Daniels behind the arc brought all of the old offensive spacing issues back to the forefront of the conversation. The group went from a top offensive unit for the Bucks to a below-average one in just two weeks, and here is how that group has performed on offense since Dec. 17: 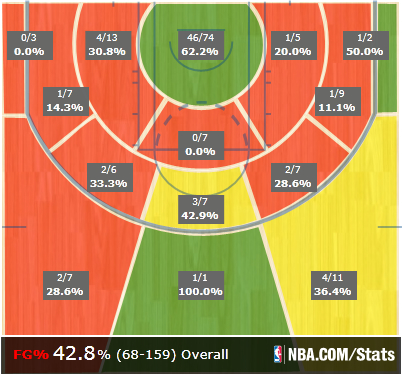 *Dunleavy and Udrih are the only two Bucks players who have played well enough to earn the top spot in net rating, and this week Udrih moved back down to No. 2 as Dunleavy transformed back into Funleavy. 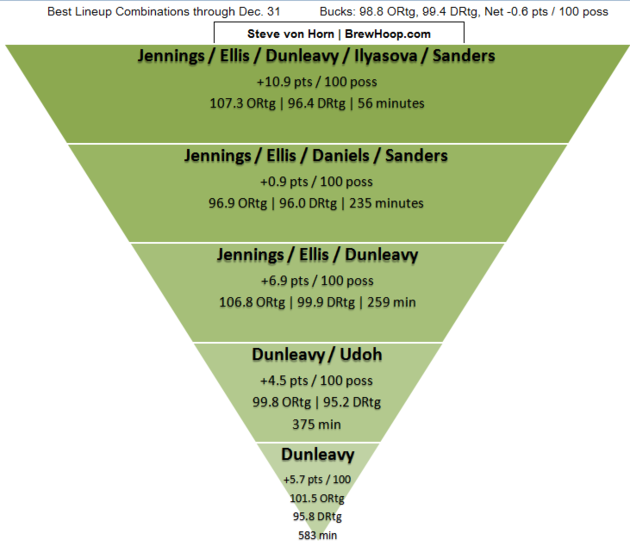 *Tobias Harris is technically still the player with the worst net rating (so he's really 4/4 for that honor) but he's only played a few minutes over the last two weeks, so I put the next-worst player on the bottom. Brandon Jennings has been in the No. 2 spot for about a month, so he gets the recognition this time around to spice things up.

*Jennings and Monta Ellis appear on the best and worst lists a lot, but they trend towards the negative overall. The two-man Jennings / Ellis pairing has been in the red for nearly the entire season, and at the moment they are -1.5 pts / 100 poss over 881 minutes -- the worst among the top-8 pairs for the Bucks. 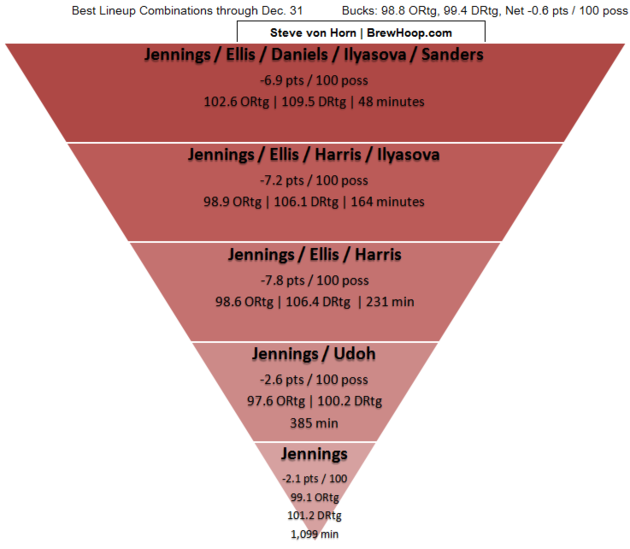