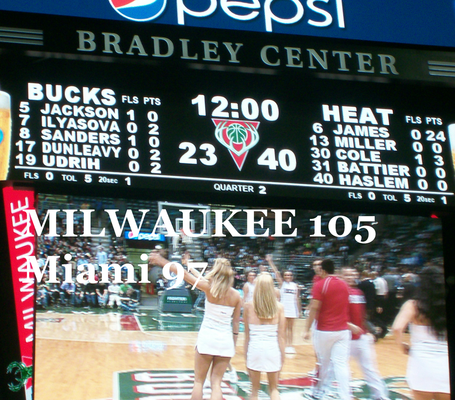 LeBron James personally won the first quarter (24-23), and the Bucks as a team won the rest (24-20, 29-19, 29-18). As a team, without Andrew Bogut for the entire game and without Stephen Jackson for the final three quarters. But as a team, with a dedication to ball movement and with the energy of a thousand suns -- and for a night the earth indeed revolved around Milwaukee.

Not that you will be able to fall asleep anytime soon now. Not with this win coursing through you.

But is this sustainable? Are we really getting a true reading of the team over the last week, or learning anything yet about the potential of the Bucks? Only one thing is clear: You finally understand all of the hype, you know why never to miss a Miami Heat game.

Because every once in a while, they play the Milwaukee Bucks.

Brandon Jennings. The 9-25 shooting effort marks one of Brandon's most inaccurate shooting nights (36.0 %) this season. And it also marks the perfect time to explain TS% -- or true shooting percentage -- for the uninitiated. The formula is PTS / (2 * (FGA + 0.44 * FTA)). In essence, it accounts for all shots fairly, whether they are two-pointers or three-pointers or free throws.

But this was more than advanced stats. This was bringing back the monocle (7-14 on threes), this was taking care of the ball (zero turnovers) despite being involved in everything, this was about active, hand-clapping defense, and this was taking over the game in the end (14 points in fourth quarter).

Brandon Jennings: Coach canceled shootaround today, but I decided to just come in and get a workout in. Just to get some extra shots and it kind of paid off toward the end tonight.

Luc Mbah a Moute. You have heard this story before, but tonight it bears repeating: Mbah a Moute capably guarded just about everyone, no matter their size or skill level. This time it was the likes of LeBron James, Dwyane Wade, and Chris Bosh, three of the most difficult covers in the world. And with a hand in their face, he had a hand in slowing both of them, so don't worry that he didn't have a block or steal.

Also, the Prince missed one shot tonight, and it was an airball hook from five feet. He skillfully got into places where he could be effective around the rim, and finished the night 6-7 from the field with 13 points. 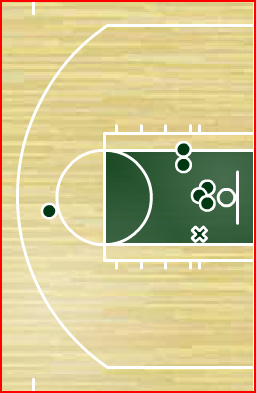 Ersan llyasova. The Bucks have struggled to keep opposing teams off the offensive glass this season, but Ersan has been causing the opposition similar problems over the past couple weeks. Getting back to his tipping and timing best on the boards, Ilyasova hauled in 7 offensive rebounds -- one shy of Miami's 8 total offensive rebounds. He was also crafty with the ball, and made some of the defining plays of the game as Milwaukee raucously turned the night in its favor in the fourth quarter.

He started the fourth quarter by hitting an and-one over Chris Bosh, followed that up with a stuff of Norris Cole on the other end that led to a Brandon Jennings layup that gave Milwaukee its first lead since early in the first quarter, 81-79, and then pulled down a big offensive rebound on the next play down.

And he played another effective game without even attempting a three-pointer.

10-23. Opponents attempt 22.2 three-pointers per game against the Heat -- most in the NBA. The wings swarm and move and cut off driving lanes, forcing teams to be the Heat from outside. And that is just what the Bucks did, making 10-23 (.443) threes, including 7-11 in the second half.

30. Six straight games with 20+ assists for the Bucks. And the 30 they racked up tonight (contrasted by 12 turnovers) tied a season-high set in a loss to Phoenix.

Back Up. After losing their first six games without Andrew Bogut this season, the Bucks have now won three in a row without their star defensive force -- keep in mind they also posted a comeback win over Houston in the game in which Bogut was injured and played just nine minutes. And don't look now -- actually, yes please look now -- the Bucks have hit 100 points in five straight games, and their offense is almost exactly league-average (and startlingly close to their defensive efficiency).

Quick Starters. Before the game, I was washing my hands at the Bradley Center after eating, and as always, there was a tip basket for the kind soul who passes paper towel with which to dry your hands. I suspected that it was going to be an odd and charming night when a kid, no more than eight years old, nonchalantly tossed a single dollar bill into the basket as he approached the sink next to me.

Motown. At 10-11, the Bucks now have a chance to reach .500 on Friday when they play the Detroit Pistons -- losers of seven straight and owners of a 4-20 record -- at The Palace of Auburn Hills. While Milwaukee is liable to drop a game to just about anyone -- witness losses to the Bobcats and Kings -- they have had Detroit's number in two games so far this season. If all goes according to plan in Detroit, the Bucks will have a chance to have a winning record on Saturday when the Bulls come to town in a game that could be almost as fun as tonight's.