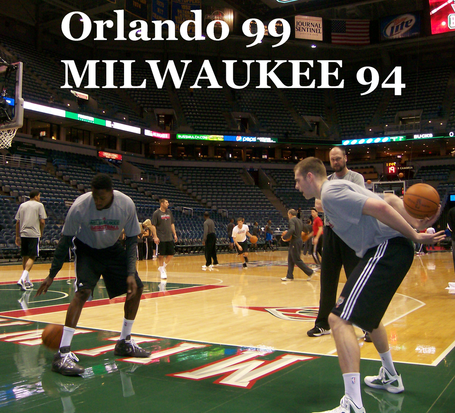 MILWAUKEE -- The Bucks lost a fourth quarter for the first time in a month, yes, but they lost more than that.

But then Jason Richardson drilled in four three-pointers to key a 16-0 run for Orlando. In less than three minutes, that 10-point lead was a 6-point deficit. And while Gooden and Ersan Ilyasova -- the two best players of the night for Milwaukee -- renewed some hope with threes of their own, this game was lost already.

And so the Bucks lost track of Jason Richardson, lost the fourth quarter, lost the game, and also lost their handle on the eighth spot in the East, after another Jeremy-Lin-Knicks win.

The Bucks were 12-15 two years ago and found a way back into the playoffs. But tonight, there is not the same kind of Magic in the air.

Ersan Ilyasova. Turkish Delight. The numbers -- 17 points on 7-10 shooting, 16 rebounds, 2 assists, 1 steal, 1 block, 0 turnovers -- paint a good picture. But the live performance was even better. Never has Ersan played a more assured game, honestly ruling the paint on a night when he shared the paint with Dwight Howard.

Ersan tipped rebounds to himself when he wasn't tipping rebounds to others, he alertly followed his own miss for a layup in the second quarter, he out-hustled and out-muscled four Magic players for a rebound at one point -- just lovely stuff.

Drew Gooden. During halftime, I watched him practice (just once) the infamous off-the-back-board-pass-to-himself. But for all of his charming and maddening basketball eccentricities, now is the time to seriously recognize Gooden as someone who has consistently stood out since Andrew Bogut went down -- on a team where everyone seems to blur together.

At one point, he stripped Howard on the defensive end and then called for the ball and spun around Ryan Anderson for a pretty basket on the offensive end. Another time, he sunk a jumper over Howard that may have caromed off the ceiling into the basket. And it is not like he was getting the benefit of calls against the NBA's only superstar center.

Gooden's defense on Howard (5-15 shooting for 11 points in 42 minutes) was one of the most impressive performances at the Bradley Center this season. That he had the leftover energy and skill to lead the team with 21 points along with 8 rebounds and 4 assists after all of his work on the defensive end only makes his night more monumental.

Mike Dunleavy. Personified the game for Milwaukee, for better and worse. Started fast with 8 points in the first quarter, and you wonder why he ever misses when he makes. But he ran out accuracy in the end, shooting 0-3 and not scoring while playing the entire fourth quarter.

28. Jason Richardson scored 28 points in the second half.

Ersanator. This is exactly what I was thinking about when I used to spend a fair bit of time thinking about how Ersan could be an absolutely ideal player off the bench for a very, very good team. In Milwaukee.

Defending Howard. Gooden was aggressive from the start, and this was a team effort, but Gooden and Howard were both out there for 42 minutes. And Gooden got the best of him. Howard didn't scored until there was less than five minutes remaining in the first half, and even from there, never made a real impact offensively. This, after Howard came in with a long history of dominating Andrew Bogut and the Bucks.

Bench. For the second game in a row, Milwaukee's bench bested Milwaukee's starters, as reserves Ersan Ilyasova, Mike Dunleavy, and Beno Udrih were three of the four best players of the game for the Bucks.

Playoffs Off. The Knicks won again tonight, beating the Timberwolves in Minnesota -- without Amare Stoudemire or Carmelo Anthony or Baron Davis. And so even after an unspeakably disastrous start to the season in the Big Apple, the Bucks are percentage points behind New York for the final playoff spot. Worst of all, the Bucks appear very much fitted into the ninth spot, clearly not cut from the same cloth as even lower-tier playoff teams like Orlando or Boston, but also quite clearly better than teams like Cleveland and Toronto. So that leaves the Knicks and Bucks to battle for the final playoff spot. Does anyone feel good about that right now?

Development. Those two young players in the photo at the top? Did not play. They joined Harris on the DNP-CD list -- Harris has played two minutes since he scored 18 points and was the only good player on the team in the Bulls game. Everyone off the bench -- save Stephen Jackson -- played well, so you can understand why the three young forwards did not make it in... but losing is only more difficult when the draft picks of the last couple years are the only players to not play.

Pressing. Brandon Jennings and Stephen Jackson have stayed in the headlines this season, but not all press is good press. And lately, neither has attracted attention for the best of reasons. Jennings shot 3-14 from the field, 0-5 on threes, and scored just 7 points in 30 minutes, making it four below-average games out of the last five. Scott Skiles subbed out an in-form Beno Udrih for Jennings for the final 3:42 of the game, but Jennings went on only to miss a couple threes.

Meanwhile, Stephen Jackson shot 2-8 from the field, 0-4 on threes, and scored just 4 points in 19 minutes, and was subbed for good out early in the fourth quarter after an uneven night all-around.