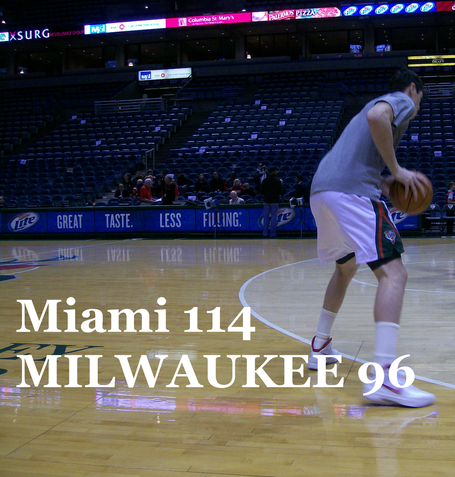 MILWAUKEE -- The falling snow outside the Bradley Center could not have covered LeBron James, so we can forgive the Bucks for not stopping the Heat tonight.

But we are having a more difficult time coming to grips with the fact that the Bucks have a worse defensive efficiency than the Toronto Raptors at this point, especially when "this point" is almost halfway through the season.

The worst part about this loss was that allowing 114 points did not even register as a surprise. The offense has kept the team in more games than the defense this season, and that is not a problem in itself, but Brandon Jennings and Drew Gooden are the keys to the offense, and they shot a combined 6-24 tonight.

So you cannot get too worked up this specific loss, but a quick look at the standings and any Knicks game over the past couple weeks makes it feel like the Bucks already came as close as they will to the thrill of a playoff series with their recent three games against the Heat. They won the series against Miami, and that will have to be good enough.

Carlos Delfino. A fine two-way night. Jumped passing lanes early, and even got LeBron's headband again. Committed a turnover, and ran back to draw a charge on Mario Chalmers. Almost stopped a LeBron/Wade two-on-one, and was hitting step-back threes and converting and-ones.

Carlitos is defending, and he is smoldering from outside. After making 5-8 three-pointers tonight, he has converted 16-24 over the past four games.

Luc Mbah a Moute. Nice start to the game, with an impressive block after a bit of one-on-one defense against Chris Bosh (who never really got going after that) and some energy going to the hoop (is he trying to dunk a lot lately, or?), but was not about to steal the night with the way James and Wade were going.

Ersan Ilyasova. Not a standout performance or anything, but Ersan continues pull down rebounds at least -- he grabbed six total (four offensive) in 24 minutes off the bench. Also earns points for managing to not commit any of the 43 fouls in this game.

0. Number of shots (out of 21) that LeBron James attempted from outside of 12 feet, via the shot chart. In his previous game against Milwaukee, James attempted a season-high seven three-pointers. 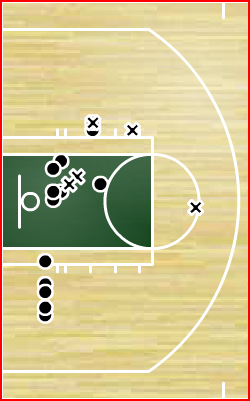 Push. The Bucks made an honest effort to push the ball off both makes and misses early on, and they outscored the Heat 9-0 on the fastbreak in the first quarter, which they won 30-27. This was also the only quarter that Brandon Jennings -- who tends to play better at a faster pace -- was effective.

La Cabeza. Stephen Jackson wants out of Milwaukee -- fortunately, the Bucks have plenty of depth to withstand his potential departure. Carlos Delfino, in particular, has played well of late.

Next. Practice tomorrow. And the 5-23 Hornets on Wednesday. How many Hornets can you name?

Home Sour Home. The Bucks have dropped four straight home games, and they are now 7-6 at the Bradley Center overall.

Defenseless. They have now allowed 99+ points in six straight games. These are raw numbers, but the advanced stats are not any prettier: After finishing 4th and 2nd in defensive efficiency over the past couple season, the Bucks entered tonight 19th.

Scott Skiles: In the first half, Wade was just cutting along the baseline and we didn't have contact, and he just had too much space. We are an average defensive team. And we cannot afford to be. We need to be above average. Our offense is up to 95, 96 points per game. We talked about before the season if we can keep our defense the same, it would be good for us. But we haven't been able to do that, our defense has been too up and down.

Brand-Off. Brandon Jennings looked poised to break out of his slump when he nailed three straight jumpers (including two three-pointers) in the first quarter. Then he made one more field goal the rest of the game. Overall, 4-10 from the field, 2-6 on threes, 12 points, 4 assists, 3 turnovers. In the four straight home losses, he has made 14-38 (.315) from the field.