Share All sharing options for: Hornets 92 Bucks 89: The Sting Of Marco Belinelli 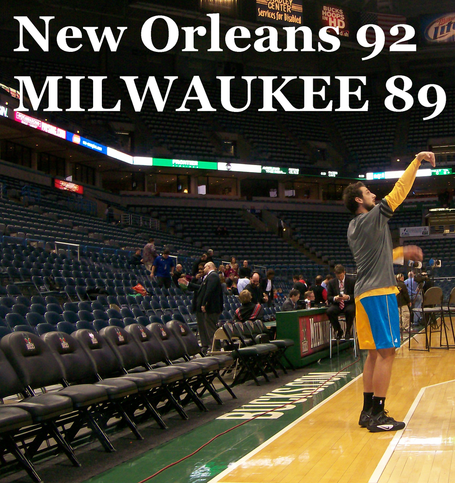 MILWAUKEE -- This was the worst loss of the season -- and the season started with a loss to the Bobcats, who are on a 16-game losing streak, as we type.

The Hornets were excited to win. Jarrett Jack was standing up on the baseline cheering in a suit coat for most of the night. When you are 5-23, make that 6-23, things are much simpler. The highs reach higher and the lows do not hit so hard because you are already so close to the ground. The wins are refreshing, the losses, expected.

Meanwhile, the Bucks are stuck in the middle, but this is not a happy medium. Nestled semi-permanently in between real playoff contention and the high lottery, Bucks fans are split on whether they want their team to win or lose. Fittingly, they get to watch a team that plays with a similar confliction, rising up to best some of the best teams and then falling impossibly low to lose to some of the worst teams -- a split basketball personality that walks a fine line back and forth between charming and bewildering.

Ersan Ilyasova. Missed the mark a few times inside the final few minutes, which is a shame. That the most aggressive player on the court can be at the same time the most indecisive one is just part of the Ersanator Riddle. The scapegoat hurried a shot that came up woefully short, down 84-81, and then could not finish a layup with Chris Kaman contesting down, 89-87. But the hero netted a season-high 23 points, had somehow drawn a charge on Greivis Vasquez right before rushing that shot down 84-81, got to the line more than anyone else in the game, making 4-6 at the stripe, put in diligent work on the boards as usual, and even delivered a highlight block of Marco Belinelli.

After the game, Brandon Jennings said Ersan was the only guy has been playing really play well for the Bucks.

Carlos Delfino. So, one of the five starters earned another start. Delfino continues to anticipate passes and come up with steals, which takes the team out of the halfcourt offense, which is only good news. Threw down a nice dunk to tie the game 45-45 after one of his three steals, but sat out the entire fourth quarter and only played 22 minutes overall.

5. Number of players who logged fourth quarter minutes for the Bucks. Scott Skiles elected to run with Brandon Jennings/Stephen Jackson/Mike Dunleavy/Ersan Ilyasova/Jon Leuer for the entire fourth quarter. It did not necessarily work out so badly -- the Bucks won the fourth 24-20 -- but it was an interesting strategy nonetheless.

Drews. First, Gooden, who tossed two straight airballs, delivered a particularly bad outlet pass, and suffered from a questionable shot selection and defensive stance. But he continues to work hard in spite of a sprained wrist and probably some other nagging aches and injuries that he shied away from specifying after the game (instead saying everyone has injuries). He never makes excuses, and keeps plugging away at a position that he is very obviously not suited to play. Gooden is a reasonably capable power forward, but instead starts at center, often guarding real centers, and not only that, but is tasked with supplying a good portion of the offense every night. When you see the player after the game, feet soaking in water, icebag on wrist, drained, you see another side.

And Bogut. Scott Skiles is in charge and Luc Mbah a Moute is out there, and they are major parts of what used to be an elite defense -- but the real key to the defense in Milwaukee for years has been Bogut. Without him, teams are simply slashing through the lane with little resistance. It was astonishing watching how easily fringe players like Greivis Vasquez and Donald Sloan penetrated and set up teammates for threes and for layups. The Bucks have a below average defense without Bogut, and they are making it painfully obvious. But it does redeem and highlight and underscore Bogut's defensive value, if that was ever necessary.

BC. The Bucks have lost five straight at home, and now they are an even 7-7 at the Bradley Center after coming back to beat the Heat on Feb. 1. That was really this month.