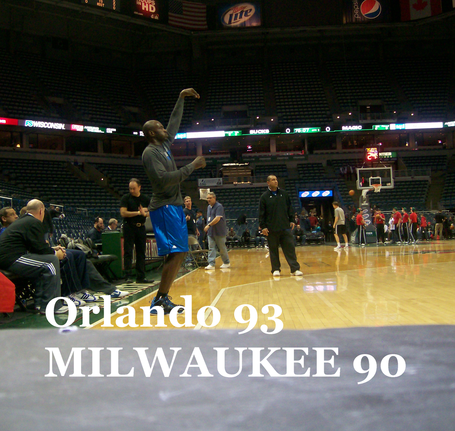 MILWAUKEE -- One year to the day after the Bucks assigned Larry Sanders to the D-League, he found the ball in his hands with four seconds remaining in the best game of his season -- some would say of his NBA career.

Trouble is, the Bucks were down by three points, and Sanders was moving toward the basket. And Sanders was moving toward the basket, but not confidently, and he missed the layup. The question this season has often been whether or not the team can even get a shot off with the clock winding down, but as the play-by-play tells it, the Bucks managed to attempt four shots in the final four seconds. Yet they were all worth a maximum of two points, all while the team was down by three -- and they all missed.

And so another missed opportunity.

It hurts to write all of that and recount all of that to you, because Sanders and Ilyasova and Jennings all played well tonight. It hurts when the Bucks lose like this. But it is also reassuring that it still hurts when the Bucks lose like this, because that means I am not numb to the losing -- I still don't always readily accept it, even as I readily expect it.

Three Bucks
Larry Sanders. Scored more tonight (13) than he had scored in all of February (10) entering the game. That the Bucks had played 11 games and Sanders had only scored 10 points is a reflection of the team's depth, but more so on the stagnation of Larry's overall game.
Sanders burst through tonight with a memorable performance in much the way Drew Gooden delivers memorable performances, and that is not intended to read as an indictment or even backhanded compliment. The missteps were serious enough to mention: he committed a blatant offensive interference taking away a basket early, fumbled a couple passes, nervously looked around before throwing the ball out of bounds with the team up 86-84, and missed that layup at the end.

But he also gamely guarded the best center in the world, helping hold Dwight Howard to 28 points and 16 rebounds, and I am sincere in that as praise. Sanders was excellent on the glass, notably grabbing a big offensive rebound with the Bucks up 86-82. He drew a charge on Howard in the fourth quarter, and consistently worked defensively. This was also a fine offensive evening for Sanders, and he even converted a nice layup on a pass from Brandon Jennings to give the Bucks an 88-87 lead.

Ersan Ilyasova. Seems like one of those rare times to mention an individual game +/-, as the Bucks outscored the Magic by nine points with Ilyasova on the court. This feels pretty substantial, particularly when Ilyasova played 40 minutes, as he continues to give Scott Skiles no reason to sub.

Aside from missing all four of his three-pointers -- which admittedly did not help -- it was another very fine game. The encore to his 29/25 masterpiece was a more modest 15/15, but Ersan did not turn the ball over all night and played strong defensively again.

Brandon Jennings. A snappy start, with 10 points in the first quarter. Too many step-back, long two-point jumpers for my taste, but they were falling at a reasonable rate, and he even hit for a nice four-point play. Gave the team a chance with a nice fourth quarter, and it looked for a fleeting moment that he could go out as the hero of the game when he scooped in a teardrop floater to give Milwaukee a 90-88 lead.

22. Ersan Ilyasova has 22 offensive rebounds in the last two days.

0. Stephen Jackson did not play.

8. Carlos Delfino seems like a very good passer some nights. Tonight was one of those nights. He senses timing and angles on fast breaks, and generally seems to pass best out of the halfcourt. As the best playmaker in the game for either team, Delfino tied a career-high with eight assists.

Like Mike. Mike Dunleavy did not make Three Bucks, but he was nice, with 18 points and 2-4 three-pointers in 36 minutes off the bench.

Close. There are few things better in life than a close NBA game.

The result was bad, but the game featured 14 ties and was competitive throughout. And competitive games are a good way keep things interesting during a season in which you don't know how good or bad to feel about winning or losing anyway.

Back Up Front Line. Jon Leuer scored the first six points of the game for Milwaukee. Ersan Ilyasova stayed on a rebounding roll. Larry Sanders came through with the best night of his season. With Andrew Bogut and Drew Gooden out, all of that depth is keeping the Bucks in games.

The player who scored 28 second half points about a week ago in Milwaukee was not active tonight, so instead the Bucks gave up a late three to Ryan Anderson to lose. And that is just the problem -- the Bucks continue to find ways to lose. They have not really stolen many wins, but the wins they have given away are mounting, and quickly.

Livingst-off. Shaun Livingston is shooting 2-16 in the last two games.