Share All sharing options for: Bucks 119, Wizards 118: Ersan Ilyasova In The Tip Of Time 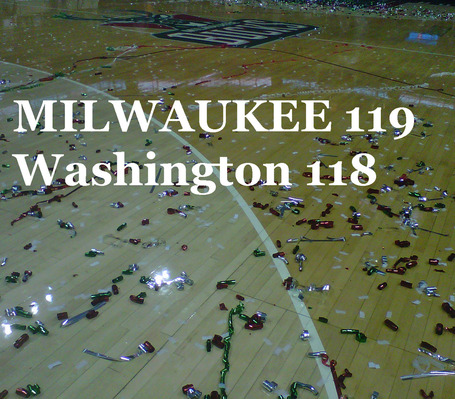 MILWAUKEE -- You could be a rich man -- or woman, depending -- with Ersan Ilyasova's nightly tips.

Tonight, it really paid off for the Bucks, who won on a classic offensive rebound tip by Ilyasova with two seconds remaining in regulation off a missed Brandon Jennings runner.

The Bucks do not want to tank, and they cannot tank, in some order. Not this team.

There is no real envy in watching the Washington Wizards -- save for some of John Wall's finer moments -- who are a real tanker's dream.

When people talk about tanking -- and they are doing so more often these days -- they often call for the Bucks to play the youth. And Tobias Harris is the name chanted the loudest. That is a completely legitimate request. The problem -- or the lack of a problem depending on how you look at it -- is that Harris came into tonight with the very best PER on the team through half of the season. The assumption that playing Harris more equates with losing more is not such a safe assumption. And that is probably a good thing, if we are going to cut to the heart of this.

Mike Dunleavy. A shooter's delight, he was the only Buck to have the three point ball working tonight -- he made 5-10, everyone else on Milwaukee made a combined 3-15. Dunleavy blew past his previous scoring high as a Buck by eight points with this 28-point evening off the bench. A full 16 of those points came in the second quarter, and this is a team that used to score 16 points in a quarter altogether on the regular. On his finest offensive night of the season, he also set a season-high with three steals, and this all comes off a 1-7, two-point game against the Bulls his last time out. We forgive.

Luc Mbah a Moute. Back in the game. After being pretty much the last person that you would expect Scott Skiles to sour on, and being pretty much the last person that Scott Skiles soured on, Mbah a Moute has rebounded from a DNP-CD against the Magic on Feb. 17 with three effective games out of four. Clearly, is not single-handedly shutting down teams defensively, but is doing more than others on that end, and put in an efficient offensive night for good measure.

+21. Maurice Evans shot 6-7 from the field and had a +21 differential in 19 minutes off the bench for the Wizards.

112. The reserves for Milwaukee and Washington combined to score 112 of the 237 points in the game, and both teams had three players off the bench reach double figures.

On Harris. Back to the intro lines about Harris. I get wanting to position things so that the Bucks have a better chance at the eighth pick than the ninth pick, or the seventh pick than the eighth pick, and so on. But what is more important is drafting good players no matter where you draft. And the Bucks appear to have made a couple very wise choices in Tobias Harris (#19) and Jon Leuer (#40). Sure, that means the team is too balanced and deep to effectively tank, and that is frustrating. But it is better to have that problem because you have a couple nice young pieces in place, because that is the whole point, right?

Offensive. Hard to believe, but Washington entered tonight with a respectable 16th ranked defense in the NBA (which is sadly quite a bit better than Milwaukee), but the Bucks just shredded them. This season is so weird.

4words. Forwards. Four words: Dunleavy, Ilyasova, Mbah a Moute, Harris. The defense at this point is inexcusable, and we will get to that next, but this was a dynamite collective offensive performance by the aforementioned four forwards, highlighted by Dunleavy's 28 points and capped by Ilyasova's game-winner.

118. The Bucks are now the kind of team that allows a season-high 20 points to Trevor Booker, and allow 118 points to the 29th ranked offense in the NBA. The fact that Milwaukee is a below average defensive team without Andrew Bogut speaks volumes about how important Bogut was on the defensive side, but it is also dangerous to assume that the team would be elite on that side of the ball with Bogut in the lineup. Many people made the dangerous assumption that any team with Scott Skiles at the helm would at least be average, but there are some serious problems on that side of the ball, and Skiles has not been able to fix those problems.

Fouled Out. JaVale McGee's ridiculous lowlight reel added another classic submission tonight, when he fouled Drew Gooden on a long three-pointer with two seconds remaining in the first half. Gooden pumped and leaned in, and McGee was flying in the air, for no reason.

He did not enter into the game after that, as the Wizards stormed back from a big deficit to take the lead and play competitively throughout the second half. Unfortunately for the rest of the Wizards, Gooden made two of those three needless free throws -- without them, the team might just have won this game.

The Giver. Milwaukee held a 22-point lead in the first half, and gave it all away, before escaping with the win against a team that is in constant disarray. Hardly inspirational stuff for those holding out hope for a playoff push.