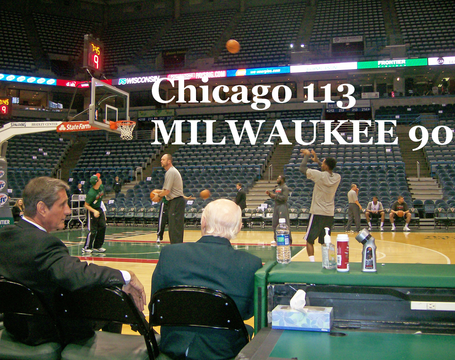 MILWAUKEE -- The Bucks won the tip. And then it was all downhill. Rather, it was all uphill.

Derrick Rose stunned the Bucks with 16 points in the first six minutes of the game. Stunned -- but to be fair, did not really surprise. We have seen this show before.

The last time that Rose and the Bulls visited Milwaukee, Rose orchestrated a 12-0 run to close the game with 10 points and an assist in the final five minutes of one of the most draining losses in a long line of draining losses last season. Rose picked up tonight exactly where he left off last March, making half of the Bradley Center dizzy with euphoria, the other half of the Bradley Center dizzy with despair.

Tobias Harris. The Bucks deliberately went to Harris with some regularity early on tonight. That is both a reflection of how quickly the first nine or ten options failed but also of how comfortably Harris operated.

With a nose for the rim and a soft touch on his shot, Harris punched in a personal-best 17 points on 8-14 from the field as Scott Skiles rightly gave him a career-high 29 minutes. And while Skiles has a long and consistent history of downplaying what happens in garbage time -- and the final three quarters were just that -- he did find some kind words for Tobias post-game.

Scott Skiles: Tobias is going to be able to score the ball. Still on the other end he's got an awful long way to go. Like a lot of rookies, when he gets into the game and gets the ball, he's going to shoot into double teams and things like that, but that's typical. He's got bounce around the basket. Tobias is going to be a very good player.

That last part seemed important coming from someone who does not make a habit of saying such things.

Drew Gooden. Typically bizarre game by Gooden, who scored just two fewer points than Derrick Rose (24 to 26) on 11 fewer field goal attempts (13 to 24), but did not pick up his first rebound until the third quarter.

Following a real off game in Detroit, returned as a serious source of offense, going strong in the lane and drawing fouls like no one else on the team can -- Gooden made 10-10 free throws in the first half while everyone else in the building combined to attempt one free throw. Clearly did not offer the requisite defense or rebounding, but was really the only starter to show up when the whistle blew.

Jon Brockman. The Bucks tied the Bulls 26-26 in the fourth quarter, even as Scott Skiles held out all of the starters while Tom Thibodeau for reasons unknown insisted on playing most of his first line. Brockman did as well as you can hope Brockman will do, pulling down a few offensive boards, committing a hard foul, and even getting on the scoreboard.

31-15. The Bulls racked up more than twice as many assists as the Bucks, as Derrick Rose proved even more brilliant as a distributor (13 assists, 0 turnovers) than as a scorer (26 points on 24 shot attempts).

20.51. Bulls backup point man C.J. Watson started tonight ranked 32nd in the entire NBA with a 20.51 PER. Brandon Jennings entered the game ranked 31st, with a 20.64 PER. After their respective performances tonight, Watson probably passed up Jennings. And the Bulls also have Derrick Rose to help out at point when necessary.

He's Got The Funke. We do not have any real reading yet whether the draft pick of Tobias Harris will prove to be a real hit, but evidence increasingly points to it not being a complete miss.

Down, But Back Up. Scott Skiles sat all five starters for the entire fourth quarter while Tom Thibodeau bizarrely played Derrick Rose and most of his first line for the majority of the final quarter with a 20+ point lead. I point this out just to say that I am grateful that Skiles -- unlike Thibodeau -- does not tend to needlessly risk injury to his stars (okay, Brandon Jennings) on either end of a blowout (and that the reserves actually tied Chicago's mostly starters 26-26 in the fourth). I am sad that Skiles nonetheless watches his players fall to injury every year anyway.

Sold. With a crowd of 17,817, this game marked the first sellout of the year at the Bradley Center. Granted, there were more Bulls than Bucks fans at the game -- or least more vocal ones -- but it made for an exciting atmosphere, at least. Probably the loudest roar of the entire season to date was at the crescendo of the National Anthem tonight.

Deep Six. The Bucks have now dropped six straight games to the Bulls, and none of them feel particularly good.

Up And Down. There is no shame in being outplayed by Derrick Rose. Pretty much everyone in the NBA was outplayed by Derrick Rose last season until the Bulls point guard ran into LeBron James in the playoffs. However, this made it two straight frustrating games both offensively and defensively for Brandon Jennings, who was coming off being outdone by Brandon Knight in a loss to Detroit. With his fantastic start to the season, along with loss of Andrew Bogut and apparent loss of Stephen Jackson, expectations are greater than ever and there is more weight and the shoulders of Jennings than ever, so these nights (4-10 shooting, 8 points, 5 assists, 0 turnovers, 4 fouls) are hard to take.

Passive. The Bulls attempted four free throws tonight. How is that possible? After the game, I (rhetorically) asked Scott Skiles if he thought that his team was not as aggressive defensively tonight.

Jon Brockman clobbered Joakim Noah in the fourth quarter, but that was the only memorable instance of defensive aggression. I was pretty surprised on one play in the midst of Derrick Rose's first quarter barrage that Drew Gooden did not take the opportunity to deliver a hard foul when he had the chance, and it continued on that way all night, as the Bulls threw down dunks and got layups with little resistance.