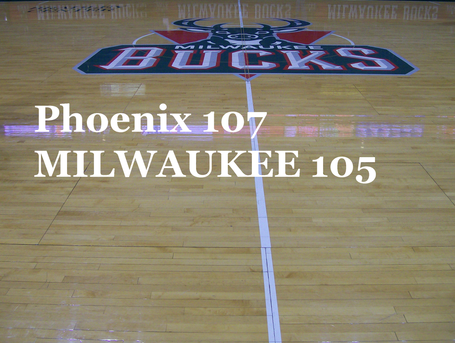 MILWAUKEE -- Down by 21 points early in the third quarter, the Bucks had a real shot to win this game at the end. And then they had no shot at all.

After a spirited second-half run brought Milwaukee all the way back to a 105-105 tie, Steve Nash sprang free for a running, banking, floating basket with five seconds remaining to go up 107-105. The Bucks opted to play for the win, inbounding to Drew Gooden, who found Ersan Ilyasova, who found Stephen Jackson, who didn't find enough time or space to even attempt a long three-point shot.

However, that one major offensive snafu in the final seconds masks a more pronounced problem: The Bucks are a below average defensive team this season, and if the past couples games are a trend, things are only getting worse on that end.

The Suns lit up the Bucks for 67 points in the first half -- the second straight game that an opponent has come into the Bradley Center and scored exactly that many points in the first half. And Steve Nash is still fantastic here on his 38th birthday, but Phoenix came in with 22nd ranked offense in the NBA and just gave it to Milwaukee, scoring big points early and getting the big baskets late. Andrew Bogut is out, such is life.

And while the offense has picked up some of the slack, the final play served as a reminder that you cannot expect the team to consistently win with offense. The Bucks have not been outscored in the fourth quarter of a game in almost a month -- they last lost a fourth quarter in Dallas on Jan. 13 -- but the late-game heroics have too often been too little, and tonight, too late.

Dunleavy ended up playing more minutes (36) than anyone on either team, finishing with 17 points on 5-7 shooting from the field including 4-5 on three pointers along with 3 rebounds, 3 assists, and 1 turnover. Wonderful stuff.

Ersan Ilyasova. Another very strong game on the boards (12 rebounds) kept Ilyasova on the court for 33 minutes, more than any starter for Milwaukee. Came up with two big blocks, and all of those pump-fakes earned Turkish Delight eight free throws, and he made them all. Only converted one of four three-pointers -- but it was a beauty at the first quarter buzzer.

Drew Gooden. Nevermind the airball hook, the unsuccessful pass-off-the-backboard to himself followed by a flagrant foul, the walking off the court out of the way of a Marcin Gortat dunk, or the getting his layup blocked followed by getting his own rebound and immediately airballing a fadeaway. Okay, do mind all of that.

But Gooden hit for 25 points, marking the the fourth time in seven games he has scored 23+ points. And he often looks like the most viable and valuable source of offense around, like when he spearheaded the comeback by making 5-6 shots for 11 points in the 31-21 third quarter.

0. In the second quarter that Milwaukee lost 33-20, the Bucks scored zero points in the paint, zero second chance points, and zero fastbreak points.

0-5. The Bucks are 0-5 when Brandon Jennings does not reach double digits in points this season. He scored a season-low 3 points tonight.

Fourth Quarters On Fourth Street. As noted in the intro, the Bucks have not lost a fourth quarter since Jan. 13, and they entered tonight as the sixth best fourth quarter team in the NBA.

Reserves. Starters Shaun Livingston, Carlos Delfino, and Luc Mbah a Moute were not particularly ineffective, at least offensively -- in fact they shot a combined 9-16 from the field. But Scott Skiles could hardly keep the likes of Mike Dunleavy, Ersan Ilyasova, and Beno Udrih off the floor.

For better or worse, the separation between the 10th or 11th best player and the 2nd or 3rd best player on the Bucks is almost certainly closer than any team in the NBA.

Often, players rotate freely in that depth chart, and that is what makes the job of Scott Skiles so difficult. One game after Tobias Harris was the best player on the team, he played two minutes. Stephen Jackson returned tonight from two straight DNP-CDs to have the final, game-deciding play drawn up for him.

The bench scored 54 of 105 points for Milwaukee tonight, as three reserves (Dunleavy, Ilyasova, Jackson) played more minutes than any starter.

Reddy. Michael Redd deservedly received a nice video tribute from the Bucks during a timeout in the first quarter. Not so nice was that he helped defeat his former team with 14 points, including a classic post-up and fadeaway jumper over Jon Leuer.

Three Steps Forward, Three Steps Back. That win over the Heat six days ago feels like months ago, as the Bucks have dropped three straight following the three-game winning streak.

Defense. The Suns outscored the Bucks 48-22 in the paint, as Marcin Gortat (21 points on 8-12 with 9 rebounds) dominated Milwaukee for the second time this season. Scott Skiles is absolutely a key to what the Bucks do defensively, and the team, just as you might assume, has been far better defensively with Luc Mbah a Moute in the lineup. Yt while there are few dominant centers in the NBA today, it is pretty clear that the team is seriously rolling the dice by rolling with exactly zero natural centers on the active roster.

PG-3. Brandon Jennings attempted one shot in the first half -- a 34-foot heaved miss at the second quarter buzzer. Overall, the team's leading scorer shot 1-4 for 3 points.

Brandon Jennings: I mean, I just didn't have the shots that I usually have. That's about it.

Brandon has received plenty of criticism for taking too many shots in the past, but this was just an oddly passive display. Moreover, the offense mostly hummed along without him making an impact, and for the third game in a row the opposing starting point guard was the star of the night. Tough times, as All-Star reserves are set to be announced on Thursday night on TNT...