Just a week removed from an impressive three-game winning streak, the Milwaukee Bucks are now mired in an equally unimpressive losing streak, suffering a letdown, a blowout, and a heartbreaker in order. Milwaukee will try to end the skid as they head to Toronto to take on the Raptors.

Extrapolating...Playoffs? The Bucks aren't looking too hot right now, especially not compared to last week. But for all the despair-mongering Bucks fans are so used to providing, the season is hardly lost. In fact, the Bucks are still in reasonably decent shape to make the playoffs, so long as they get their act together quickly and stop losing to bad teams. John Hollinger's Playoff Odds still give Milwaukee a 65.2% chance of grabbing the 8th seed, outpacing the New York Knicks at 38.8%. That doesn't take into account the eventual return of franchise savior Baron Davis (that's what New York is calling him, so that's what I'll call him), and the Knicks are more likely to acquire a helpful piece at the trade deadline than the Bucks. But Milwaukee has beaten New York once already, and that counts for something, right? Maybe?

Bad-Luck Bucks. Speaking of, the Bucks' luck has hurt them to the tune of roughly 5%, according to Pythagorean Winning Percentage Estimates. 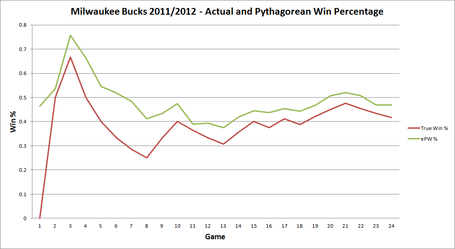 With an early-season schedule that probably qualifies as "murderous" and the loss of several key players on a rotating-basis (sound familiar?), the Bucks are roughly a game back of their "expected" record. Last season Milwaukee under-performed its point margin all year, while the playoff run of 2010 saw the Bucks outpace their margin after the All-Star break, coinciding with the arrival of the not-yet-evil John Salmons.

Judging Jennings and Jackson. Last night was a strange one for Milwaukee's two most talk-about players. Jennings attempted only four shots, his fewest ever when playing more than 12 minutes. Jackson turned in a mildly-productive outing in his first court time since last week. But both earned more attention for what they said post-game than what they did in-game:

My question to #Bucks Stephen Jackson: Do you still want to be in Milwaukee? S-Jax: "I can't answer that. If I answer that, I'll get fined."

Jennings was asked about his offensive performance (h/t to Jeremy at Bucksketball for the quotes):

I mean, I just didn't have the shots I usually have. That's about it.

I just wasn't open. Just trying to get my teammates goin'.

It'd be great if Jennings consciously chose not shoot when he wasn't open and instead focused on setting up his teammates. But last night wasn't some attempt at playing the distributor. Last night was sleepwalking.