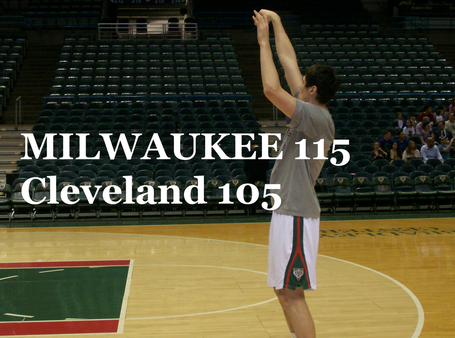 MILWAUKEE -- Break up the Bucks!

This time, figuratively. The team has strung together four wins in a row for the first time since... for the first... time... since... April 2010. Which is to say, almost two full years ago.

The continuation of good form and favorable results arrives on the heels of the literal breaking up of the Bucks, to some extent. But the team that remains, remains on point. After all of the off-the-court news, those who shifted focus back onto the court were rewarded with 48 minutes of honest basketball, seemingly each one better than the previous one, as the team started a bit slowly on the defensive end and then turned in three straight net positive quarters.

In the first game after trading franchise center Andrew Bogut, his replacement or fill-in or backup no longer deserves to be called any of those things. Because the underappreciated Drew Gooden has delivered throughout most of the season, and he delivered a triple-double (15 points, 10 rebounds, 13 assists) against the Cavaliers tonight. I should say, Drew Gooden delivered his annual triple-double against the Cavaliers tonight.

As the Bucks waited for their new players to pass physicals, they did not wait to confirm their new identity as an up-tempo offensive force, netting 38 assists -- most by any team in the NBA this season -- en route to 115 points. En route to what was not a rout, but to what was a clear indication that even if no one else is, the players are existing and co-existing in the present, detached from the past and nonchalant about the future.

Drew Gooden. Benched for the entire fourth quarter, but it was not like that. It was like this: Drew Gooden racked up a triple-double through three quarters, and watched his team finish the game sitting front row. Gooden rifled his way to nine dimes by halftime, and so the first plateau he reached on way to clinching a triple-double was assists. Nevermind that 1.1 assists/game career average -- Gooden is averaging a career-high 2.1 assists/game this season.

Ersan Ilyasova. Sometimes a layup is better than a dunk, and I hope that finish Ilyasova made is a part of the highlights that we put up tomorrow.

Things have been pretty insane around here over the past couple days, but tonight signaled a return to normalcy Ersanity, and the hype around Ersanity -- like Linsanity -- will stay fresh as long as he stays fresh. A good sign when 22 points on 12 shots along with 8 rebounds and 2 blocks seems nothing out of the ordinary.

Mike Dunleavy. The four-game winning streak has coincided with the best four-game stretch by Mike Dunleavy as a Buck, but don't let "coincided" imply that this is all some sort of a coincidence. Dunleavy sharpshot his way to 21 points on a marvelous 8-11 from the field, and his shooting has been outdone only by his passing (5 assists and 1 turnover tonight) lately.

108.2 The Bucks are averaging 108.2 points over the past 11 games. Someone please triple-check this math because I have already double-checked and each time I was confused with delight.

12/13. Not a lot of talk about Luc Mbah a Moute around these parts lately, but he quietly returned tonight to score 12 points and add 13 rebounds in 27 minutes in one of his best games of the season.

Passketball. As noted in the intro, the 38 assists by the Bucks represent a single-game high in the NBA this season. They were well on their way to making that mark when they assisted on their first 15 field goals of the game, which I am comfortably moving forward assuming is also the most by any team this season.

Drew Gooden was just in a passing mood and he rightfully will get (and got) the headlines. But the Brandon Jennings/Beno Udrih point guard duo (Shaun Livingston is day-to-day) also combined for 15 assists and 4 turnovers, and this team is a team.

Balance. The depth of this team is a blessing and a curse both to the fans and the players in so many ways, but it has made the team very watchable and even competitive while two of the team's three projected best players have been sidelined -- and now traded. Tonight, seven players (Ilyasova 22, Dunleavy 21, Jennings 17, Delfino 17, Gooden 15, Mbah a Moute 12) reached double figures in scoring.

Starting Anew. This is what a locker room sounds like when a team is winning. I won't add the laughs by Dunleavy or the reporters in the quote, but you get the idea. Dunleavy's locker is right next to Gooden's locker. Post-game:

Mike Dunleavy: Yeah, well some nights he (Drew Gooden) is tragic, and some nights he is Magic. Tonight he was Magic, with a little tragic sprinkled in. Five turnovers, come on.

Gooden was actually the one who made the tragic/Magic comparisons last spring after his triple-double against the Cavaliers. The team has come a long way, and gone in a lot of different directions since then. And while the locker room atmosphere is often largely reflection of the on-court results, the mood was atypically light, refreshing tonight.

Too Good. The Bucks illustrated again that they are simply too good to be the 10th best team in the East, and...

The Knicks. Won by 40 tonight in the first post-D'Antoni Era game.

No Curtain Call. From Drew Gooden.