Well. That was fun.

In the debuts of new arrivals Monta Ellis and Ekpe Udoh, the Milwaukee Bucks ran roughshod over the Golden State Warriors, scoring a season-high 120 points and putting the game comfortably out of reach early in the fourth quarter. The Warriors were without their two best players, PG Stephen Curry and, of course, center Andrew Bogut (weird), and the franchise is assumed to be in tank mode for the remainder of this season. But when a team gunning for the playoffs plays a team looking to lose, a blowout should be expected. And a blowout is exactly what we got.

If I may go so far as to make a bold statement, I'll say that the first quarter of this game was the most enjoyable quarter the Bucks have played in a long time. Maybe not the most efficient, or effective, or important, but just seeing the ball flying around the court while Warriors tried to keep up was an absolute pleasure. The Bucks held a 19 point lead after 12 minutes and looked to be cruising. The second quarter dropped off a bit, as the Bucks' ball movement began to stall and some bad shots got hoisted. The Warriors' attempts started to drop and the momentum began to swing. But a late 10-4 run boosted the margin back to 13 at the half.

The final 24 minutes were a blur, as both teams posted offensive ratings above 115.0, including an incredible 136.0 for Milwaukee. Surprisingly (and infuriatingly for Warriors coach Mark Jackson, I'm sure), the Bucks continued to pile on much in the same way they did in the first half: a strong showing on the offensive glass, lots of open jumpers for players accustomed to making them, and plenty of running and dishing.

Seeing only the final score, one could be forgiven for assuming Brandon Jennings, or Monta Ellis, or even Drew Gooden blew up for a big scoring night. But while each of them contributed in useful ways, tonight starred a very different trio of deer. 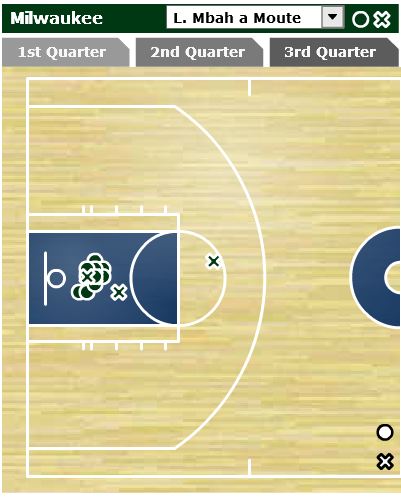 Ignore those spots in the corner; Luc Mbah a Moute didn't try any half-court shot in this game. The rest is accurate. Luc scored a career-high 22 points on layup after layup after wide-open layup. It was almost confusing. He also pulled down 17 rebounds (9 offensive), had three steals, and blocked a shot. Luc's value lies largely in his ability to lock down opponents, but tonight was a showcase of a skill set that extends far beyond defense.

Mike Dunleavy. The game's leading scorer also attempted the third-fewest shots among every Milwaukee player who earned significant minutes. Dunleavy's 24 points on only 8 shots were a thing of beauty, and he looked to be toying with Golden State for stretches. When defenders finally started closing out aggressively, he elegantly pump-faked, took a single step, then buried the shot. Or, when he felt like being particularly devious, he pulled out the old pump-fake-shot-attempt-foul-drawing maneuver. Also chipped in four assists and three rebounds for good measure, and not a single turnover.

Carlos Delfino. Just an efficient 15 points on 10 shots...OH AND ALSO NINE REBOUNDS, THREE ASSISTS, THREE STEALS, AND A BLOCK. The biggest thing for Carlos is to get the long ball falling again, but a varied and productive night like this one is all the more encouraging. Honorable mention goes to Beno Udrih, who didn't do much scoring but led the Bucks with 9 assists.

12. The Warriors committed 12 turnovers in this game. The Bucks had 12 steals. They're related. Steals have sort of entered that realm of "so overrated they underrated" by virtue of high-steal players who aren't actually good defenders. But on a more general level, steals are really quite excellent, as live-ball turnovers frequently lead to transition opportunities, where most NBA teams score quite well.

3.5. This is a bit of a stretch, but it's been discussed: the Bucks are only three and a half games behind the Boston Celtics for the 7th seed in the Easter Conference Playoffs. If the Bulls keep hold of the best record in the conference, that seed is going to look straight-up mouthwatering.

I Like To Move It Move It. 33 assists on 45 made baskets, and many of those were at the rim or behind the arc. And many of those at the rim were to Luc Mbah a Moute, whose off-ball movement freed him up time and time again. After the game Scott Skiles emphasized how important ball movement is for this team, and suggested that were still getting better at it. With 30+ assists in three consecutive games for the first time since the 2000-01 season (via @BucksPR), "better" is getting tough to imagine.

Backing Up Ersan. With Ersan Ilyasova out of the game due to an illness, the Bucks' rebounding was almost certain to take a hit. But thanks to big efforts from Mbah a Moute, Delfino, and Drew Gooden, the Bucks finished with excellent defensive and offensive rebound rates of 84.4 and 36.4, respectively.

Good Sports. Monta Ellis wasn't on "bad" terms with Golden State, but it was obvious that the relationship was strained and unlikely to last. With the trade still so fresh in everybody's mind, the reaction Warriors fans would have to the return of their recently-departed was worth pondering. They proved nothing less than amiable, giving Monta rousing applause and cheering loudly for some of his early buckets. They also featured some video retrospectives on the scoreboard. No doubt Andrew Bogut will be greeted with similar appreciation when he returns to the Bradley Center.

Backcourt Bricks. Brandon Jennings and Monta Ellis are capable of some pretty impressive stuff while sharing a court, but they're also capable of missing lots of shots. And miss shots they did, as the pair notched matching 6-15 shooting lines in their first game together. Ellis went 6-6 from the stripe to keep his final line respectable. By my own memory, I can only think of maybe 4 or 5 downright bad shots between the two of them, but misses are misses, and there might be a lot more where this came from.