Drew Gooden Named NBA Eastern Conference Player Of The Week, And A Few Other Bucks Notes

Share All sharing options for: Drew Gooden Named NBA Eastern Conference Player Of The Week, And A Few Other Bucks Notes

Milwaukee Bucks center (?) Drew Gooden earned the NBA's Eastern Conference Player of the Week Award on Monday for games played from March 12-18. This is the first time Gooden has earned the Player of the Week honor, but it marks the second straight time the Bucks have been honored -- Ersan Ilyasova grabbed the award one week earlier. During the three games he played last week (all victories for Milwaukee), Gooden averaged 18.0 points on 53.3 percent shooting to go with 9.7 rebounds and 8.0 assists in 31 minutes per contest.

The highlight of his very strong week came against the Cleveland Cavaliers when he ripped off his second career triple-double with 15 points on 7-12 shooting, 13 assists against five turnovers and 10 rebounds in just 30 minutes of action. Despite being misused as a center out of necessity after the injury to former Buck Andrew Bogut, Gooden has made the best of the situation. For the season (38 games), he holds a career-high PER (19.9), and has posted a respectable 52.9 TS% with per game averages of 14.5 points, 6.8 rebounds and 2.4 assists. A nice quote from Gooden and some other odds and ends are beyond the jump.

Our beloved baldie has a good perspective on the award as well, and here is what he had to say to Charles Gardner of the Milwaukee Journal-Sentinel:

"You only get those type of awards when your team is winning," Gooden said after the Bucks' practice session Monday at the Rose Garden. "I couldn't have done that without my team playing well and us getting some wins. I talked to coach (Scott Skiles) early in the season about wanting to be on a winner here and wanting to do what I can, to do my part in working through the tough times," Gooden said.

...It's accomplishing what we want to accomplish, and that's winning basketball and making a run in the playoffs. I'm just glad that's starting to look a little more realistic now. We still have a long ways to go. But we're getting better."

Ersan Available For Tuesday? Head coach Scott Skiles also told Gardner that Ilyasova is not yet 100 percent (bronchial condition), but with a good night's rest he should be ready for Tuesday night's game against the tank-tastic Portland Trail Blazers. Skiles also noted that the extra practice time helped Monta Ellis and Ekpe Udoh familiarize themselves with their new teammates and the team's system a bit better, so hopefully we can expect the transition to be seamless heading into the meat of the playoff race.

Wonderful Monta Ellis artwork from Tony.psd of SB Nation's Warriors blog, Golden State of Mind. Be sure to follow the link on GSoM provided here and join the community just to tell Tony how great his work is in the Monta send-off. Check it out: 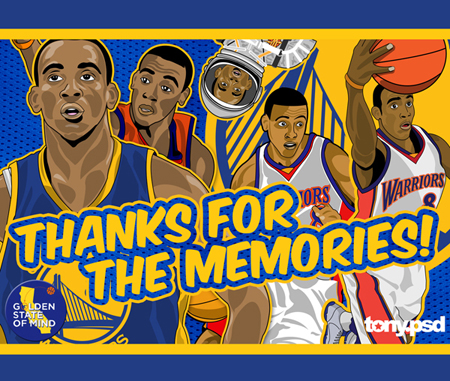