Share All sharing options for: Celtics 100, Bucks 91: Six-Game Streak Snapped In Half 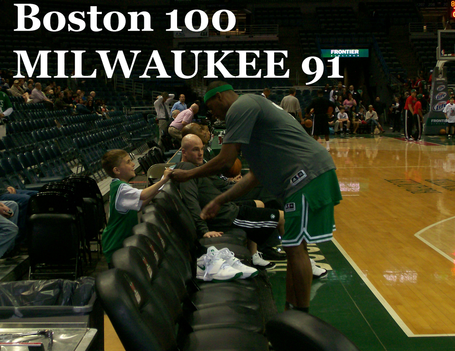 MILWAUKEE -- The second half, that is.

March Happiness segued into March Sadness on the arc of 54 missed shots tonight for the Bucks at the Bradley Center.

The offensive renaissance relapsed into the Dark Ages of 2010-11 in a 33-point second half, spoiling the home debut of Monta Ellis, who shot 6-18 from the floor and 1-1 at the line for 13 points along with seven assists and one turnover, providing roughly equal parts supporting evidence for his doubters and believers alike.

On the first possession of the game, Drew Gooden missed a guarded 19-foot jumper after 19 seconds of track-down defense by Boston. And while the Bucks went on to score 29 points in the first quarter and actually carried a two-point lead into halftime, that first play proved more illustrative of what was ultimately to come, as the reigning Eastern Conference Player of the Week made just 2-12 from the floor as Milwaukee's offense fizzled against a team that has retained its defensive identity, displayed in full effect tonight.

Carlos Delfino. Hard to cut his minutes now, as this makes four strong games in a row for Delfino since the team traded for Monta Ellis and Ekpe Udoh. Scored 16 points on 5-9 shooting from the field. Knocked in 2-6 threes, which is not so great, but consider that his teammates made 1-9 from outside. Also threw down a nice dunk, which came after one of his three steals.

Ersan Ilyasova. As wonderfully influential as Rajon Rondo in the first half, Ilyasova went into the halftime locker room with 12 points and 8 rebounds. But he returned to that same locker room about an hour later with those same 12 points, getting blanked on 0-3 shooting in the second half.

Still, 12 points on 6-11 shooting along with 14 rebounds, 3 assists, 1 steal, 2 blocks, 0 turnovers, and 1 charge drawn is perfectly acceptable, though admittedly not completely Ersane.

Mike Dunleavy. The only offensive punch off the bench tonight, Dunleavy added 11 points on 5-8 shooting from the field. But like Ilyasova, all of his points came in the first half, and Dunleavy did not find other ways to affect the game in major ways.

11. Boston entered the game averaging 5.5 blocks, seventh most in the NBA. But Wisconsin native Greg Stiemsma almost had that many himself -- blocking five shots in 24 minutes off the bench. Ersan Ilyasova and Drew Gooden were each blocked three times, while Beno Udrih was stuffed twice.

13. The Celtics also racked up 13 steals against the Bucks, led again by Greg Stiemsma, who had four. Rajon Rondo added three steals.

Next. Tomorrow night the Bucks visit the 7-37 Bobcats. Although.

Digging Deep. Although it didn't show too well tonight, the Bucks have a lot of depth. And they are healthy, at the right time, for one of the first times in the Skiles Era. That is mostly good, but it does leave the coach with the constant dilemma of determining who should play on a team with a glut of players occupying a similar talent level.

Tonight, that meant 1:33 of garbage time for former starters Shaun Livingston (23 starts) and Tobias Harris (7 starts), along with Larry Sanders, who started March on a relative roll. It also meant telling Jon Leuer (10 starts) that he was inactive for the game. Before the game, Skiles spoke about how it was difficult to do that.

Scott Skiles: I'd rather not do that. I would rather that everybody could just dress. I don't like that, having to go tell guys that they are on the inactive list. It seemed like a good idea when it came in, but as often with good ideas there are unintended consequences that we have to deal with. With the injured list, a guy was on there for five games. So it's hard sometimes, you have to go tell a healthy guy, 'you are inactive tonight.' But maybe they'll move in that direction, and just keep everybody active.

Whether the unending lineup shuffling breeds healthy competitiveness or frustration among the players is debatable, but it is certainly a difficult balancing act that Skiles is sensitive to, which might arrive as news.

Boarding House. Ekpe Udoh's low rebounding rate was a major concern, so it was swell to watch him grab a career-high 10 rebounds tonight in 21 minutes off the bench.

6-18. Not only the shooting line of Monta Ellis, the Bucks also fell to 6-18 against teams with a .500+ record. As noted in the preview, the six-game winning streak came exclusively against losing teams.

Doh. Beno Udrih inadvertently threw a pass directly at Ekpe Udoh's face in the fourth quarter, drawing into question whether the idea of cornering the market on U-starting surnames is a sound endeavor.

Playoff Watch. With the Knicks not playing tonight, the only scoreboard worth watching was the one at the Bradley Center.

The Bucks could have drawn within a game of the Celtics in the East -- and keep in mind that they finish the regular season with a game in Boston on April 26 -- but instead they continue to draw a clear line between themselves and both upper-echelon and lower-echelon teams, in the process dropping three games behind Boston, who also now own the tiebreaker. With 20 games remaining, there is some time to catch up, but this was a major setback for the Bucks.