Share All sharing options for: Pacers 125, Bucks 104: Too Much George Hill, Not Enough Defense 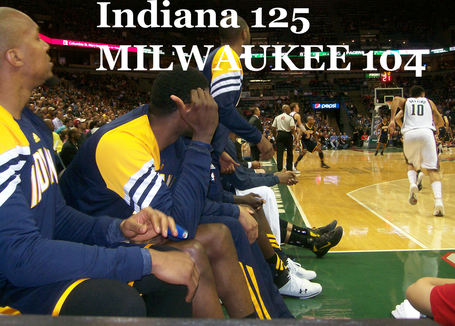 Entering the night with a precisely ordinary, 15th ranked offense, the Pacers arrived in Milwaukee and suddenly became extraordinary. In 48 minutes, they scored 125 points, the most by a Bucks opponent since Houston dropped 127 on the Bucks back on Feb. 17, 2010.

The Brandon Jennings/Monta Ellis backcourt was outscored 24-23 by reserve guard George Hill, despite taking 16 more shots from the field. Ellis appeared well on his way to the best game of his Bucks career after scoring nine points in the first quarter, but he scored just two the rest of the game, as the Pacers slowly but very surely pulled away. With more than six minutes left in regulation, Jon Brockman checked in and fans checked out -- the Bucks lost, and disappointment won.

So, yes, the Bucks looked like they were caught in a bit of a fog, or like a team playing for the third time in three nights. Or, they just played like they typically do against winning teams. Which is to say, not good enough. A night after another blowout win against one of the worst teams in the NBA, the Bucks fell to 6-19 against clubs with a winning record, which draws into question just how enjoyable a playoff appearance would be for this team. Not that we necessarily should be worrying about that anyway, at least based on tonight's results in Milwaukee and New York.

Ersan Ilyasova. Arms always up, another six offensive rebounds for Ersan. Also led the team with 22 points on 8-15 shooting and contributed consistently throughout the four quarters.

Carlos Delfino. Not gamebreaking stuff here, but stayed warm from outside, making 3-6 three-pointers, and finished with 13 points, 7 rebounds, 3 assists, and 2 steals in 30 minutes.

Jon Brockman. Forget that the game was essentially decided and celebrate that he made all three of his shots.

30-19. The Bucks actually reached the 30-assist plateau once again, while the Pacers only had 19 assists.

32-14. However, the main reason Indiana did not accumulate big assist totals was because they spent so much time scoring at the free throw line, making 32-39 from the stripe, while Milwaukee made just 14-18.

68. The Pacers scored 68 points in the second half, which seems excessive.

Three Is Good. Best part is when he sits down, as though taking and making that shot was just the easiest way to get to his seat.

Backcourt Offense. I watched Brandon Jennings practice jumpers alone at the Bradley Center almost three hours before gametime, and he was on point then. But that all changed once the game started. And really, all of Milwaukee's guards struggled offensively, and I prefer not to address their defense. Monta Ellis scored two points after the first quarter, Brandon Jennings shot 4-15 on attempts from inside half court and did not attempt a single free throw in 31 minutes, and Beno Udrih missed all seven of his shots from the field.

Frontcourt Defense. Our preview highlighted that the Bucks would have a distinct size disadvantage, and Roy Hibbert (16 points on 7-11 shooting) just towered over Drew Gooden and the rest of the Bucks, and it was painfully just that simple at times. Gooden gives good effort, but he is not an expert defender and is playing out of position at center, which of course is not his fault, but is a problem nevertheless. Particularly when the guards/wings are not stopping penetration.

Playoff Picture. The Knicks gave it to the Pistons 101-79, leaving the Bucks 1.5 games behind the Knicks for the final playoff spot. Time for Brandon Jennings Time at Madison Square Garden on Monday night.