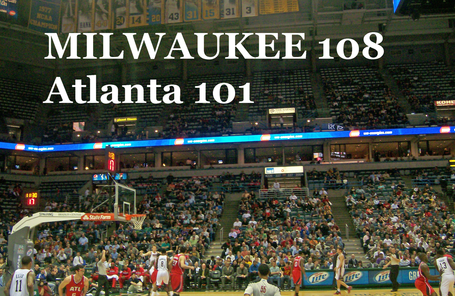 After striking out (and striking out) in New York against the Knicks on Sunday, his name was written in the sky from start to end in Milwaukee this evening. It all started with a jumper to open scoring in the first quarter for the Bucks, and it all ended for the Hawks with a 17-point fourth quarter from the shooting guard.

Playing without Ersan Ilyasova (back spasms) and Carlos Delfino (right groin injury), the Bucks elected to run with an eight-man rotation. Because while Tobias Harris and Shaun Livingston were available to play (and even the inactive Kwame Brown was in the house), Scott Skiles had the convenient dilemma of trying to figure out which in-form player to sub out tonight. All five starters contributed in varying degrees, Mike Dunleavy continues to be Mike Dunleavy, while Beno Udrih and Larry Sanders delivered plus performances off the bench.

The Bucks had all of the role players -- and for at least one night, they had the star.

Trailing Chicago by 16.5 games with 16 games remaining, the Bucks cannot catch the Bulls in the regular season. But they still have a chance to draw them in the postseason.

Monta Ellis. A hot start (10 points in the first quarter) foreshadowed an even hotter finish (17 points in the fourth quarter) for Ellis, who broke through after entering the game averaging 12.2 points on 34.2 % shooting from the field as a Milwaukee Buck. After numbers like those, this was bound to happen, but that doesn't mean it doesn't feel good. Walked off the court with 33 points on 15-24 field goals and 8 assists. No one shot more or scored more or assisted more than Ellis on either team -- this was his game, and he made it work. And make no mistake, it really was his game -- Brandon Jennings played off the ball a lot tonight.

Luc Mbah a Moute. Not only made 3-4 baseline jumpers, but finished around the rim expertly. The Prince made fast, decisive moves toward the rim and cleared out space and angles for himself to go up with momentum. In just his second start since mid-February, made a real positive impact on both sides of the ball.

Larry Sanders. Teamed with Ekpe Udoh (who could also be in this spot) for a smashing stuff of Marvin Williams in the first half and the two combined well on a few other possessions as well. Sanders touched just about every square foot of the court in just 14 minutes, and the Bucks played some of their best ball with him on the court (+9 differential). Blocked three shots, pulled in five rebounds, and who knows, earned some more minutes?

Backcourt Back. From the preview:

While advanced stats have historically not treated Monta Ellis kindly, even his traditional stats are lacking since joining the team. Ellis has not scored 20 points in six games since joining the Bucks, after never going more than three games in a row without reaching 20 points this season prior to joining the Bucks. Things were not so bad when Milwaukee's offense was still humming along, but with Drew Gooden and Ersan Ilyasova slowing from their torrid paces, the starting backcourt will need to assume its fair share of offensive responsibility -- like now.

Well, the starting backcourt certainly assumed its fair share of offensively responsibility, netting 51 points between them on 37 shots -- along with 14 assists. The jury is out on how well Brandon Jennings and Monta Ellis can co-exist, but tonight lent some support to the notion that they can thrive in an open-court attacking mode -- at least when some of the jumpers are also falling.

PG. Beno Udrih dished out five assists in the first seven minutes of the second quarter, helping the Bucks to a 17-point lead. On two of those passes he found Brandon Jennings (including for an and-one), and Jennings seemed to excel playing off the ball tonight with Udrih and Monta Ellis handling part-time point guard duties. Scott Skiles has consistently paired Jennings with point guards since Day One (notably, Luke Ridnour) with some success, and I think things are only moving more in that direction.

Like Mike. In the final week of the Month of Mike, Dunleavy continues to roll. Tonight, 13 points including 3-5 on three-pointers. Before the game against the Pacers, Scott Skiles gushed about Dunleavy, and I think this marks the first time that I have used the phrase "Skiles gushed about."

Scott Skiles: I think he's having his best year now. I had a long discussion with Jim (O'Brien) before we signed him. He's a big Mike Dunleavy fan, and I am too. We all are. He's played really, really well. We looked at his whole career. Obviously last year he was a 46 FG% and 40 3PT%. We thought he might not do that again. Now he's a 48 FG% and 41 3PT%. On the floor, off the court, he's a total professional. He's easy to coach and low maintenance. Let alone, he can dribble, pass, and shoot. He's been a big factor for us. James Harden, Lou Williams, those are the obvious Sixth Man of the Year type guys, but I think Mike ought to be in that conversation.

Live By The Jumpshot. The Bucks prevailed despite the Hawks outscoring them 50-32 in the paint. The Bucks are re-fashioned offensively, and they beat the Hawks with easy points in transition (13-6), but in the half court they will be living and dying largely by the jumpshot, as we have witnessed over the past two games.