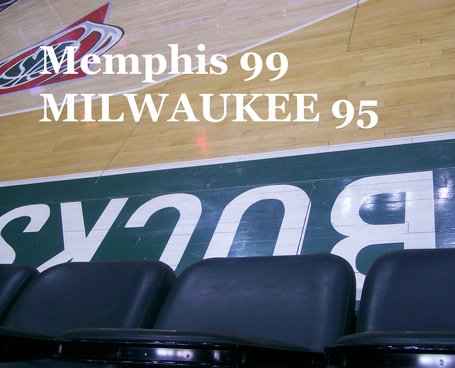 It wasn't all bad. Doing their best impression of the ballhawking Grizzlies early on, the Bucks jumped in each and every passing and dribbling lane -- and made defense fashionable again. But after holding the Grizzlies to 11 points in the first quarter, the Bucks gave up 36 in the second quarter, the bulk of them (20) in the paint. That is just a quick recap of the first half, but it also comprehensively covered all of the field goals that Monta Ellis made. The starting shooting guard scored eight more points than you in 35 more minutes on the night and did not make his first basket from the field until midway through the fourth quarter.

The Bucks made a late push to draw within 97-95, and when I say they made a late push, I mean that the Grizzlies absurdly fouled both Ersan Ilyasova and then Ekpe Udoh on three-pointers in the final minute. But that push was too little, too ill-fated. Which is just how the playoff push feels now.

Ersan Ilyasova. The only real presence on the glass for the Bucks, his relentlessness could be quantified both by his rebounds (16) against a much bigger frontcourt, as well as his new career high free throw attempts (12). Stayed strong all 43 minutes, and finished with 20 points, 16 rebounds, 2 steals, and 2 blocks.

Luc Mbah a Moute. Honestly getting pretty creative around the rim, where he is shooting much, much better this season (from 57.9 % last season to 66.1 % this season). In his best moments around the offensive basket, Mbah a Moute uses the rim and the backboard to shield himself away from defenders. Just seems to slide and pump-fake and turn his way around in there. That being said, this is a low-volume trick that is more suitable off quick cuts than post-ups. Of course, his real value lies on the defensive end, where he did a number on Rudy Gay in the first half.

Brandon Jennings. Came out shooting like could not miss, which was probably/maybe/not really understandable given his picture-perfect swishes all Friday night in Cleveland. But of course he could and did miss a fair share this time early on, misfiring on all four attempts from outside in the first quarter. But just as he redeemed himself after blowing a breakaway dunk by grabbing the rebound and scoring an and-one, Jennings atoned for early misses by making 7-12 field goals over the final three quarters. But never quite kicked it into takeover mode, on a night when the team needed a superhero.

9. The Bucks racked up nine steals in the first half against the team that leads the NBA averaging 10.0 steals per game. They added three more for a total of 12 steals.

5. Drew Gooden led the way with five steals, which also happens to be the same number of rebounds that he collected.

3. O.J. Mayo was the only player on Memphis to finish with more than two assists. And he had three (with four turnovers). Enough though.

Randolph vs. Udoh. Zach Randolph made a 16-foot jumper with 9:45 to go in the second quarter. That is what the play-by-play will say. It was really unspectacular within the context of the game and in the sense of how routine it was. But from my vantage, the only thing in the world on Ekpe Udoh's mind was preventing Randolph from scoring, and Randolph could not have been any cooler sinking that shot. Those two, matched up? Just a real slice of basketball.

Loud Crowd. The Bucks played like they were playing in front of a real crowd early in the game. Or was it that the crowd reacted like they were watching a real basketball team? Maybe these things were not mutually exclusive. In any event, a real downer that the Bucks did not cap the night with a win, but good to see a good turnout (17,106) and lively crowd at the Bradley Center. More of this.

New York. The injury news -- Jeremy Lin is out for six weeks while Amare Stoudemire is out for a couple weeks as well -- is Bad. Because all injuries are always Bad. The only Good thing is that the Knicks, as constituted, are not exactly firing on all cylinders despite winning tonight. Rather, they "pushed through the muck" that was the Cleveland Cavaliers sans Kyrie Irving tonight, via the inimitable Posting and Toasting.

Seth Rosenthal: That's pretty much it. The Knicks, weary and undermanned, didn't exactly glow in their return to the Garden, but it didn't take much to beat an equally depleted bunch of Cavaliers. The good news is that the victory was as valuable as it was yucky. New York's win combined with a Milwaukee loss negated Friday's events and boosted the Knicks back up to a 2.5-game lead in the eighth spot. That's prettyyyyy important. After playing eight games in eleven days, the Knicks have a light but tough week coming up: away games in Indiana and Orlando followed by a home game against The Bulls. So, yeah, it was imperative that New York take the win against a team that started Donald Sloan.

So, in sum, the Knicks are thin, they did not look particularly good tonight once again, and they are looking at an extremely difficult upcoming schedule: @Indiana, @Orlando, vs. Chicago, @Chicago... and @Milwaukee.

New York. With that said, the Knicks did take their turn beating the woebegone Cavaliers tonight. And that means the Bucks are now 2.5 games back of the final playoff spot, with a few busy April weeks to play.

Broken Glass. Before the game, Scott Skiles spoke about how important it is for the Bucks to shore up their defensive rebounding.

Scott Skiles: We are not getting enough stops, and when we do, and the other team gets the rebound, it can be demoralizing to the group.

And then the Grizzlies went out and demoralized and outrebounded the Bucks 58-39, including doubling them up (18-9) on the offensive glass.

Monta. "It was a good pass." That is what I said after Ersan Ilyasova missed a three with the Bucks down 83-77. That was also me trying to convince myself that Monta Ellis was making a positive impact, in some way, any way. It seems silly to cite the most traditional of traditional stats when talking about the shortcomings of Ellis, but so far with the Bucks, Ellis has hit 20+ points exactly once in nine games (after averaging 21.9 in Golden State this season). One thing is for sure: so far he is no John Salmons, which can be construed as either a good or bad thing, I guess.