Bucks 97, Sixers 93: Brandon Jennings Fills It Up Against Philadelphia

Share All sharing options for: Bucks 97, Sixers 93: Brandon Jennings Fills It Up Against Philadelphia 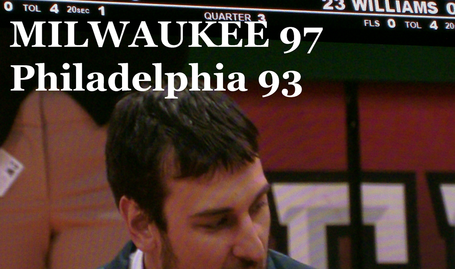 Tonight, for better. Jennings stung the Sixers with 19 first quarter points, waltzing through the top-ranked defense in the NBA with runners and threes and free throws. The shininess of it all was dimmed first by Philadelphia's flying offense that gave the visitors a 33-29 first quarter lead in spite of Brandon, and then by Brandon, who missed all three of his shots and neglected to score in the second quarter. Though down by just four points at halftime, the Bucks looked more than halfway to another loss.

But the Bucks showed some bite after halftime. After holding Philadelphia to 16 points in the third quarter, the team decided they would let Lou Williams try to beat them in the fourth quarter -- or Lou Williams decided he would try to beat the Bucks in the fourth quarter. In any event, it almost came true as the late-game specialist scored 16 points in the final 12 minutes, but spun his wheels in the final seconds, overdribbling and missing both of his shots when the Sixers trailed by two with under two minutes in regulation.

The Bucks played the second half like a team desperate to be 15-23, and no matter what you want from them right now, there is something commendable about them wanting so much to be 15-23, and no, not 14-24. There is precious little pride in being 15-23, but that is exactly where the Sixers stood last year, and there is a way out.

Brandon Jennings. Scored 14 points in the first six minutes of the game against the best defense in the NBA. And that is the kind of thing that makes it so hard to give up on him altogether.

The points came from all over, a nice balance of twos (7-15), threes (4-8), and free throws (7-8). Not only led everyone in points (33), but also led everyone in assists (7). Also, this was the rare type of night when he drew defenders so that even some of his misses were efficient misses, like a driving floater moving to the left in the third quarter that Drew Gooden followed for a dunk to go up 74-71. Those misses -- Derrick Rose misses, you might say -- seem so rare but look so nice compared to those dreaded long stepback twos.

Drew Gooden. Committed a lane violation on his own free throw, opted to play a bit of point guard with Brandon Jennings at his side before getting the ball stripped at halfcourt, and skied a pass a few rows up late in the fourth quarter.

But 25 and 10 for Gooden, and hardly an offensive peep from any of the bigs on Philadelphia.

Ersan Ilyasova. Through all of the lineup shuffles over the past few weeks, Ilyasova continues to stay on the court -- this marked the 13th game in a row that Ersanity has lasted 24+ minutes. And with all of that rebounding, it is impossible to keep him off the court for long. Ilyasova pulled down 18 rebounds total tonight, including 5 on the offensive boards.

Jennings is a good free throw shooter but has always had a difficult time getting to the line. To that point, he attempted two free throws in 63 minutes in the final two games of February, and there is not all that much reason to believe he can suddenly start to consistently get to the line, but it sure would mark a major progression in his game and efficiency if he did.

Fasting. The Sixers this season have been the blueprint for what the Bucks wanted to be in a lot of ways, and turning defense into quick offense is foremost among them. From the preview:

The Bucks were outscored in the paint (46-32), but made up the difference and then some on the fastbreak, where they outscored the Sixers 21-6. Both teams went small throughout the game, with the Bucks even trotting out a three-point-guard lineup with Jennings/Udrih/Livingston to end the first half, as Skiles tended to push the right buttons.

Defense. With neither Andrew Bogut nor Luc Mbah a Moute, the Bucks turned in a pretty reasonable defensive performance after the first quarter, holding an admittedly cold Philadelphia team entering the game to 38 points in the second half and 37.2 % shooting in the game.

Injury Report. Luc Mbah a Moute (right knee soreness) did not play tonight, and there is virtually no reason to think that there will be a steady lineup or rotation this season -- again.

Del3nope. Carlos Delfino shot 1-7 for 2 points tonight, and the newest starting shooting guard is is shooting 19.2 % from the field in three games in March.

Next. The Bulls are in town on Wednesday...