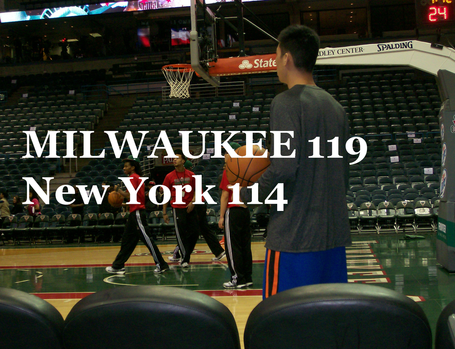 You had to be there. And the good news is that there was a better chance than usual that you were there, at this second straight sellout. They played Jump Around and people actually jumped around, and that might sound natural, but it is not normal.

Then again, climactic fourth quarters at the Bradley Center might just be the new normal, if we are to trust this week. If this was the first week of the season, you would be telling your friends who "only watch college basketball" that the Bucks are worth a watch, on the way to the playoffs. And they might have even listened, and you might have been wrong or right. Alas, timing is everything, and (too?) many are already tuned out.

Ersan Ilyasova? He is tuned in. ERSANATOR -- we made some t-shirts a couple years ago in anticipation of this breakout -- is doing a lot more than simply finding the right place at the right time. Though he is impeccable about doing that, too. Case in point: With the Bucks up 114-113 and the shot-clock winding and the game-clock inside 30 seconds, Brandon Jennings scooped a one-handed, underhanded airball toward the general vicinity of the basket delivered a clairvoyant pass that Drew Gooden volleyed to Ersan Ilyasova for a layup in front of the rim.

Ersan Ilyasova. He is even getting calls, at this point. Oozing confidence, Ersanator leaned in on Jeremy Lin a step inside the three point line and got one of those calls that Dwyane Wade always gets or Brandon Jennings never ever gets.

The possession before the wild play described in the intro, Ilyasova tipped an offensive rebound to himself and at the basket and drew a shooting foul, earning him a trip to the line, where he made both free throws to give Milwaukee a 114-111 lead.

Bizarre game for Ilyasova, who went to halftime with zero rebounds, in part because he was playing on the perimeter and in part because there were precious few missed shots to gather on either end. Ended the game with the two biggest plays of all, and with 26 points on 9-13 FG.

Brandon Jennings. For the second game in a row, Brandon Jennings saw more jerseys of the opposing starting point guard in the Bradley Center than his own. A night removed from hearing MVP chants reverberate through the BC after Derrick Rose made a game-winning shot over him, Jennings overcame Linsanity and popped in 10 points and dished out 5 assists in the decisive third quarter that the Bucks dominated 32-18.

Forgetting the Bulls game -- would be nice -- Brandon has played some of the best ball of his career in March, now with four strong games out of five. Tonight, he added 25 points along with 10 assists, 3 turnovers, and 5 rebounds on 9-18 FG and 4-7 3PTFG.

After the game, Jennings was high on Ersan.

Mike Dunleavy. Dunleavy chose the path of least resistance (Steve Novak) pretty well early on, scoring 14 points o 6-7 from the field in the first quarter on a combination of bright cuts and light threes. The three-point ball was wicked tonight, other than that one airball -- which oddly was the second game in a row he airballed a triple. Converted one of the prettiest plays of all on a cut to the basket where he received and the ball on a quick pass from Drew Gooden and in the same motion completed a layup -- fluidity to make water jealous.

1. The Knicks shot 70.6 % in the fourth quarter while the Bucks shot 37.5 %. But the Bucks only turned the ball over once in the final 12 minutes, so they were able to get off 24 shots from the field and managed 26 points to hold off New York.

+17. Larry Sanders, as bucks1 mentioned in the game thread, accumulated a +17 differential in just 15 minutes. Sanders was a busy bee, also pulling down 11 rebounds (6 offensive), blocking 3 shots, and committing 5 fouls in a short but memorable stint on the court.

Shootout In Wild East. Sometimes it is difficult to see and appreciate good defense, but... okay, there is no "but" here. Sometimes it just is difficult to see and appreciate good defense, especially when it comes at the expense of good -- or in Milwaukee's case last season -- tolerable offense. The Bucks are exactly where they were a year ago, at 16-24, but at least they are losing and winning in some aesthetic style this week: The Bucks made 13-26 (.500) three-pointers, and the teams combined for 42 fastbreak points (New York 25, Milwaukee 17) and continued to play at a pace that clearly befits Brandon Jennings.

If anyone tracked the number of dunks in this game, do tell.

Kool Keith. Keith Firmin nobly traveled all the way across the pond from England to Wisconsin to quench his home country's thirst for Milwaukee Bucks coverage this week at the Bradley Center -- and what a week he chose. Although Keith unofficially placed a disappointing third in the British Accent Contest at the pre-game dinner table behind Paul Imig and Jeremy Schmidt and ahead of Jake McCormick, at my request he accepted the responsibility of single-handedly turning basketball on to all of England via providing a window into the Bucks. While the Bucks might not have the most fans/writers, they have the most interesting ones, judging from my experience.

Thinning. Shaun Livingston (left ankle) and Luc Mbah a Moute (knee) both left the game, and their status for Sunday in Toronto is undetermined.

MISSING: Defense. Your thoughts on 119-114, Andrew Bogut and Tyson Chandler?