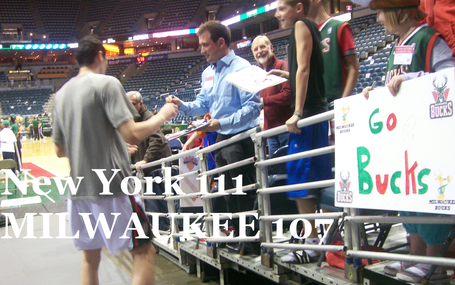 MILWAUKEE -- Another day, another dour.

The Bucks lost to another winning team tonight, only this time there exists the caveat that the Knicks (30-28) are only a winning team because the Bucks lost tonight. That is circular and frustrating and true and this is a hard game to re-live right now. So, naturally, let's start from the beginning of the night.

Before the game, Scott Skiles was asked about the team playing from behind recently.

Skiles: We've had too many games this year where we're playing from behind too much. I'm not talking about 24-22, I'm talking about 33-18, things like that. We can't let them come out here after a loss last night and (have) a big first quarter. It'd be nice if we had them in the (low) 20s early in the game and kind of establish our defense. They're playing much better defense, but we'll find ways to score if we can get enough stops tonight. They're a very good all-around team right now.

Shortly thereafter, the Bucks trailed 32-18, which I think qualifies as "things like that." When Skiles said it would be nice if they had the Knicks in the low 20s early in the game, I don't think he meant quite so early, as the Knicks racked up 20 points within five and a half minutes of the opening tip.

In fact, the Knicks made 14 layups/dunks in the first quarter tonight, so for as excruciating as the fourth quarter turned out, this negative result was in the works early. Because Milwaukee just cannot get stops on the defensive end, and there continues to be a lot more to it than Drew Gooden, who was limited to five minutes due to an assortment of ailments. The Knicks have offensive star power, but also possess the 22nd ranked offense, and 4th ranked defense. So while the Bucks fizzled offensively in the end -- the Knicks ended the game on a 6-0 run over the final 1:16 of regulation -- they fizzled defensively from the beginning.

Monta Ellis and Brandon Jennings? After combining for 19 points last time out in New York, they came to play tonight in front of a national audience -- combining to score 57 of the starting lineup's 62 points. But they will need to bring it about eight times out of eight for the rest of the season if they want to play in front of a national audience again.

Monta Ellis. Ellis had his best game as a Buck -- and that was by halftime. Nothing short of sensational in the first half, Ellis sang quite a redemption song after scoring 4 points on 2-14 shooting in his previous meeting with the Knicks. In 20 first half minutes, Ellis went like this: 21 points on 8-12 field goals, 2-4 three pointers, 7 assists, 4 steals, and 2 turnovers. Not quite so flawless in the second half, and people will magnify that he missed a key jumper with less than a minute to go, but he was probably the best player on the team in the second half overall too.

Brandon Jennings. The yin to Monta's yang, or something, as the starting backcourt mates scored (57 points) and passed (17 assists) with verve. How many floaters did Jennings make tonight? At least three or four, by my count. Nice little offensive night by Brandon, even though those three-pointers (2-9) were not falling so regularly -- remember to set those feet -- and he did not make a free throw (0-1). Earned points the harder ways, netting 22 points on 10-20 field goals along with 4 rebounds and 7 assists.

Larry Sanders. Battled with Chander and the Knicks in the paint while he was in there -- which was only for 11 minutes. Picked up three fouls in those 11 minutes, sure, but had three more to give. Blocked three shots, added another dunk, and will become increasingly important over the final couple weeks since Drew Gooden is positively hobbled out there.

28. Noted this in the story intro, but the Knicks made 14 layups/dunks in the first quarter, scoring 28 points in the paint. Absolutely outrageous.

13. Ersan Ilyasova does not match up well with the Knicks, at least within Milwaukee's incomplete roster. Tonight, he played 13 minutes and finished with 3 points and 2 rebounds.

Game On. The game featured 18 lead changes and 16 ties. And it was a compelling/insanely frustrating watch, all the way.

Posting. And Toasting the opponent.

Udoh Say. Ekpe Udoh, to Jeremy Lin, via Twitter, after the game. Keep in mind, these two Dougied as Warriors.

Not How It Was Drawn Up. Drew Gooden is not feeling so hot. He played five minutes in the first quarter and did not return. The Bucks (still) do not have a center, but he has been the closest thing. Defensively, we know he has a tough time even when healthy, but by most measures, he was a net positive player for the team this year, even playing out of position (allowing an 18.0 PER to opposing centers but putting up a 19.0 PER at center).

With all of the changes this season, we still never really got to see any of the varying groups put it all together. Gooden won Player of the Week honors in the first week Monta Ellis arrived, but Ellis was new and off to a slow-ish start at the time. Now that Ellis and Jennings are putting together some nice games of late, Gooden is slowing almost to a halt. Too bad.

Play Off. The Knicks won, the Bucks, you may have heard, lost, and the 76ers won as well. Which is to say, worst-case scenario. The Bucks now trail the Knicks by two games, no longer hold the tiebreaker (which is conference record), and are three behind the 76ers. With eight games to go.

Costly Throws. The Bucks shot 62.5% from the free throw line, making just 15-24. Brandon Jennings missed his lone free throw (the fact that it was his lone free throw in 40 minutes is a problem in itself) after Carmelo Anthony earned a technical. Carlos Delfino missed on his only trip to the line. Luc Mbah a Moute made just 2-5. Ill-timed stuff from the fifth most accurate free throw shooting team in the NBA entering tonight.