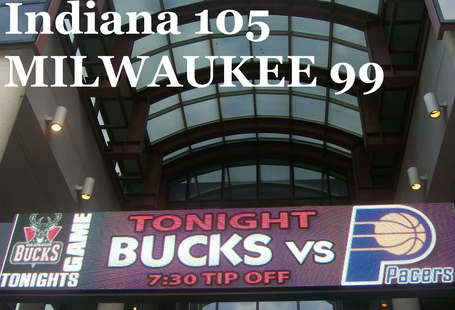 MILWAUKEE -- Sixty-three degrees outside the Bradley Center on the walk to my car on 4th and Vliet after the game -- and each and every one stung a little.

Today -- 4/14 -- was Milwaukee Day in Milwaukee, but it didn't feel it. Not after the Bucks politely refrained from scoring for almost four minutes, deep in the fourth quarter. Not after the Bucks fell back to an even 15-15 at home. The good teams, they say, win half of their games on the road, not at home, and I am usually skeptical of "they" but they have it right this time.

In the dire end, Indiana led for the final 41:50 of the game, but Milwaukee pushed to within three points with four minutes flat to go at 99-96 when Mike Dunleavy sank a three like Mike Dunleavy sinks threes. And then, nothing.

Dunleavy missed a three. Larry Sanders received the ball at the top of the key, panicked, took a high dribble, turned, and threw the ball out of bounds. Brandon Jennings missed a three, Ersan Ilyasova picked the offensive rebound, and was stripped. Monta Ellis missed a jumper. Sanders missed two free throws. Ilyasova missed a three. Jennings missed a runner. Shades of last season. By the time Ellis made a three, the Bucks had already missed another chance to make up ground in the playoff race, and all of New York City and Philadelphia slept easy.

But why yearn for the playoffs anyway -- to invariably fall to the Bulls? These circles under my eyes are from late-night binges of Bucks basketball, living and re-living a win that is followed only by a loss. For years this has gone on, and this is the last story I will write for BrewHoop for months, at least, give me a break. We need to be talking about a championship and nothing else. You can't limit yourself to just playoffs. Who wants to do that? Playoffs is not really an achievement to me. Anybody can get to the playoffs.

But I am not in charge, cannot set the standards, make things happen. I am just a writer, and should at least know how to attribute quotes, so let me try that again.

"We need to be talking about a championship and nothing else. You can't limit yourself to just playoffs. Who wants to do that? Playoffs is not really an achievement to me. Anybody can get to the playoffs," said Stephen Jackson at 2011 Media Day for the Milwaukee Bucks.

Paragraph five was just a setup.

Because nothing comes crashing down when you win and move out of the lottery and are on the verge of making the playoffs. After all, eating a couple cookies -- for dessert in May -- does not hurt as much as that Jennings three missing the mark tonight. The playoffs are not the ultimate goal, but they are the first goal, and that is why we watch. The middle ground of the NBA does not always feel like a happy medium, but sports, like life, is about the journey, not the end result. To deem an entire season -- and by extension the moments contained within -- an ultimate failure because your team did not manage to finish exactly first or exactly last is to shun the nuances of the game that draw you to it in the first place.

That spin and roll was just as nice whether the Bucks won the game or lost, whether the season ends in late-April or mid-May. Lose sight of that, and skip the regular season and just tune in sometime in June to see if your team is in the Finals.

Try to trade Andrew Bogut for anything or nothing, or trade 1,000 last-place finishes for one championship, but along the way, try to free yourself from the idea that everything must go according to a set plan. That way, you can start to just feel good when things are good, instead of feeling bad that things aren't perfect.

Of course, there should be a plan, and maybe even there is when it seems like there is not. And that plan should have an eye, maybe two, on a championship.

For those of us writing and reading thousands of words about the Bucks, there is a natural tendency to demand absolute perfection, complete coherence, clarity, and logic. The more you get into something, the more you invest analytically and emotionally in something, the higher your standards soar. If you are still reading this far, you are there. I discover John Fante, and suddenly know what it really is to read. I watch the Oklahoma City Thunder, and I know there is something better out there. I am drawn to the most interesting and exciting and highest quality things, and to the people who are drawn the same way.

That is why it is difficult for you and for me to embrace anything short of the ideal. The natural progression in the case of the Bucks is to focus squarely on a championship. And when that is neither on the doorstep nor the horizon, it is then that exasperation and puzzlement and gloom set in, in some order, or sometimes, all at once. When this recurs over decades, a haze of what might feel like pessimism hovers.

But what actually drives all of this -- this focus on completeness and glory -- are bright, bright streaks of idealism. We do not subscribe to pessimism because we do not believe in a predetermined bad outcome. On the contrary, our pessimism only sometimes surfaces because of our core understanding in the existence, the possibility, of greatness -- and because we know this greatness is real we will not stop or be altogether satisfied until we see it, feel it, have it all to ourselves. We have visions of a basketball utopia, where all the threes go in at the end and where we walk back to our car on 4th and Vliet only after the other 29 cities have gone to sleep. Bliss is reserved for this.

Just leave room for pockets of happiness in the meantime.

I am writing this reminder to you because I had to write this to me.

After a few or 1,015 stories published here at BrewHoop/SB Nation, I will be writing for Bucks.com exclusively for a while, starting in the next week or so. Please give a read, follow me on Twitter @alexboeder, email me at adboeder@gmail.com with story ideas etc., and continue reading everything at BrewHoop because it is my favorite website. I'll be around. Thanks. -Alex