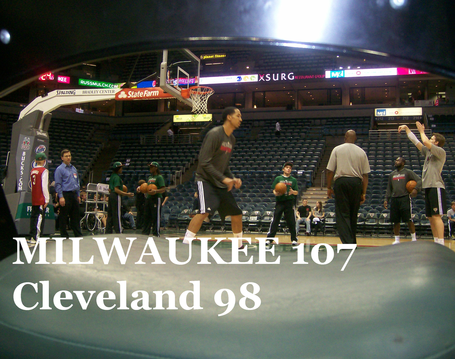 Brandon Jennings told Monta Ellis to not stop until they stopped him, and Ellis never stopped. And so he kept shooting until it was time to go home, making eight straight shots to end the game -- a sublime bit of skill that had everyone losing track of exactly how many points in a row he scored. For the record, he counted to 16, in less than five minutes.

That type of ending almost makes you forget the middle, and if only it were that easy. But this was also the type of game that made you feel like the lead was never enough -- not because the Cavaliers were a genuine threat to come all the way back, but because the Cavaliers are just so vacant without Kyrie Irving. They had lost seven straight by at least a dozen points, and this was a single-digit affair in the end despite the late-game staginess of Ellis.

After all, as Scott Skiles readily pointed out after the game, the Bucks lost each of the final three quarters -- even that last one. And -- my words, not his -- to a team that might just be the worst in the NBA right now. Yet they not only won, but managed to make it fun. Predictably crazy night.

Monta Ellis. One game after Brandon Jennings went into takeover mode with 17 points in the third quarter against Cleveland, Ellis took his turn taking over a game. Life is largely about timing, and Ellis waited until just the most memorable time to throw in 16 straight points. Only one layup (a pretty finger roll) among the eight straight shots, Ellis just took over in the mid-range. Had a hand, sometimes two, in most of Milwaukee's points tonight, leading everyone with 30 points on 15-25 field goals and 8 assists.

Ersan Ilyasova. Wanted so much to put Larry Sanders and his two straight big blocks in the feel-good first quarter here, but Ilyasova (18 points on 8-13 FG along with 6 rebounds, 2 assists, 0 turnovers) is just wildly consistent right now. This makes five straight strong games in a row for Ilyasova after missing the Hawks game with back spasms. The back spasms, by the way, are contagious, and Drew Gooden has them now.

39/2. Brandon Jennings and Monta Ellis combined to shoot 39 field goals and 2 free throws. Provided with only that information, this sounds like a worst-case scenario for the starting backcourt. The kicker is that they made 25-39 field goals.

Ell-is-on. Ellis continues to work as a willing passer, and hopefully now he is starting to find his shooting rhythm.

Brandunk. We knew Brandon Jennings had more than the two-handed breakaway slam in his dunk repertoire (watch the whole thing, but definitely watch from 2:15 on). But it was nice to see it for the first time in the NBA. Even better that his new backcourt mate tossed the alley to his oop.

Home, Sweet. Starting a five-game homestand on the right foot. The Bucks have blown out a bunch of teams lately, but not so much at home. And while they didn't even really get the blowout here tonight, they did control the game all the way. They improved to 13-12 at the Bradley Center, after entering tonight having lost 10 of 15 at home.

Coasting. The Bucks coasted through this game, in both good and bad ways. They led by double-digits almost the entire game, but they also never really closed the door until late in the game. Good thing Monta got hot, real hot.

Defense. Drew Gooden catches a lot of blame for the interior defensive woes, and he is plenty culpable in his own right. But without him, the Bucks did not look much better clogging driving lanes or gathering defensive rebounds. The Cavaliers shot 21-51 in the paint, which is a pretty terrible success rate, but 51 shots is a lot, and they missed a lot of shots around the rim chiefly because they are the Cavaliers. And then they gathered a bunch of offensive rebounds (21) and then missed even more shots because they were still the Cavaliers. But the Bucks don't get to play the Cavaliers every night.