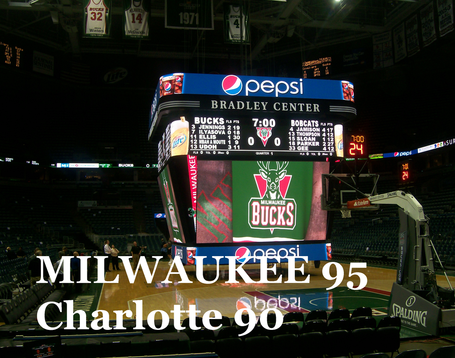 Scott Skiles: Nothing against Mullens, but he looked like Bill Russell out there. Our preparation this morning wasn't good. We weren't good to start the game. Defense was terrible. And we won.

Indeed, the Bucks did not beat the line, win the heart of their coach, or impress discerning fans. But they did again emerge with a win. And look -- they almost have as many of those as losses now.

Brandon Jennings. Made the spectacular pass look routine, but also made the routine passes spectacularly. Jennings was the playmaker of the night, grabbing five steals, dishing nine assists, and never turning the ball over. His scoring line -- 18 points on 8-17 field goals and zero free throw attempts -- leaves some efficiency to be desired, but this was a very fine point guard performance on a night when the Bucks again went with a committee approach to the position.

Monta Ellis. My favorite part about Monta's night was that he led everyone in trips to the free throw line. If Ellis and Jennings are going to shoot almost 40 times from the field between them like they have the past couple games, they need to balance all of those (often difficult) shots with some free ones. The 7-9 night at the line saved his night, enabling him to score a reasonable 25 points on 9-21 field goals.

Ersan Ilyasova. Despite an atypically rough shooting night (5-15 FG), earns default honors here for being the only Buck willing and able to grab a rebound -- or in his case, 15.

6/26. Kemba Walker almost ended up with a triple-double (18 points, 7 rebounds, 8 assists). But he actually ended up shooting 6-26 from the field. Which is really 23.0 % and really unacceptable.

17. The Bobcats pulled in 17 offensive rebounds. Byron Mullens had 9 by his lonesome. Without going into gruesome detail, that is too many.

0. Tyrus Thomas played 13 minutes and refrained from collecting a point, rebound, assist, steal or block. But, he did convey to a fan that he wanted a butterfly steak, done medium, not medium-well, as beautifully chronicled by Paul Imig and Jeremy Schmidt.

For Three. The Bucks have been rather imperfect in April, but they pushed ahead to 3-0 with the win tonight. And so they are within one game of the Knicks, with three more home games in a row -- against Portland on Saturday night and then Oklahoma City on Monday and (emphasis) New York on Wednesday.

Brand-on. Against something resembling NBA-level competition (Wizards, Cavaliers, Bobcats), Brandon Jennings is off to a swell start in April, with averages of 18.6 points and 6.6 assists on a 50.0 FG%. And he is building a nice little highlight reel as well.

Perspective. Byron Mullens put up a career-high 31 points along with 14 rebounds, and the Bucks still just do not have answers in the post on defense -- clearly this was never just a Drew Gooden thing. Ekpe Udoh picked up two quick fouls, Larry Sanders got into some foul trouble of his own, and this was trouble from the start, as the Bucks still do not have a center. Mullens and Bismack Biyombo have some nice tools, but they should not be dominating a game. Charlotte's starters racked up a composite +18 differential, and Milwaukee only won because Charlotte's bench -- 2 points in 44 minutes -- is a bad joke. The Bobcats have lost 10 in a row and won't make it to double-digits in wins this season. And this game was pretty even.