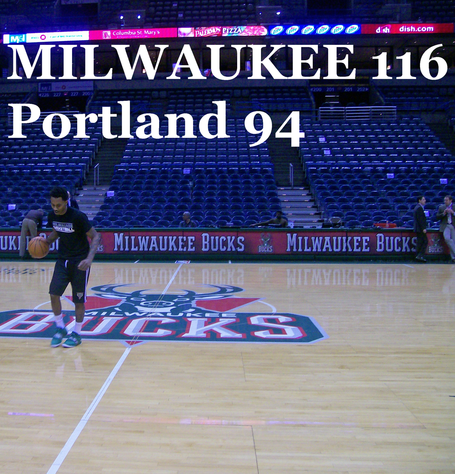 MILWAUKEE -- Oh, Deer. If the Blazers were not already tired after overtime last night and a flight from Dallas -- they are now.

Milwaukee blazed past Portland with a 46-15 flourish to end the game tonight, stylishly extending their winning streak to four games. Facing a much more formidable opponent than in their previous April games, the Bucks shifted up a few gears and ended up coasting to a 22-point victory after trailing by as many as 11 points in the first half.

Because an 11-point lead just isn't what it used to be against the Bucks. Everyone might make a run in the NBA, but few teams run like the Bucks right now, and this is the kind of a team that you start to watch whether you are a Bucks fan or not.

Leading by five points entering the fourth quarter, Scott Skiles ran with Udrih/Jennings/Dunleavy/Sanders/Udoh until all of a sudden they carried an 18-point lead with a couple minutes to play. Entering the game, this particular fivesome had played just four minutes together. Of course, they had outscored their opponent 16-1 in that time. And it was pretty much like that again tonight.

Beno Udrih. Five-star performance by Udrih. Set a season-high with 21 points, and there was a lot more to this than that. Single game differential stats for individual players are almost never worth citing, but Udrih's +30 feels all sorts of right. Started the game off with a couple corner threes that foreshadowed an exceptional all-around night for the 24.4 % three-point shooter. Linked wonderfully with Brandon Jennings -- real shades of the Jennings/Ridnour pairing of yesteryear.

Larry Sanders. The unofficial Sanders dunk tally is six. Not bad for someone who entered the night with 15 all year. Focusing exclusively on the dunks, though, would be to sell Sanders short. Because he was long and all over, buzzing around the court, blocking shots, flexing, dishing, grabbing offensive boards, defending.

Ersan Ilyasova. My in-game box score could not refresh fast enough to keep up with Ersan in the first quarter. And this time, that is more a reflection of how quickly and frequently Ilyasova scored than simply the inglorious wireless internet at the Bradley Center. Ilyasova's 16-point first quarter was a fading memory by the time the Bucks scored another 62 points in the second half, but they counted just as much as when Ellis dropped in 16 in the fourth quarter.

11. The Bucks outscored the Blazers 30-11 in the fourth quarter.

19-5. Thanks to 16 offensive rebounds, the Bucks outscored the Blazers 19-5 in second-chance points.

+122. Composite differential of Milwaukee's bench. So that depth is coming in handy.

Outlook. The Knicks host the Bulls tomorrow. Just in time for the probable return of Derrick Rose. If the Knicks lose, the Bucks will be tied for the final playoff spot. And the Knicks get to play the Bulls again in Chicago on Tuesday. Also, the Sixers lost again tonight, so the Bucks are only 1.5 games behind them for the seven spot.

Jennings. Although he did not make Three Bucks, this was another very strong game by Brandon Jennings, who looks incredibly comfortable out there. The up-tempo offense, the part-time point guard duties, the shooters around him -- everything is coming together for Jennings. He is pulling something new and showy every game, and is a joy to watch right now. Tonight, 21 points on 7-14 field goals, 3-5 three-pointers, 4-4 free throws.