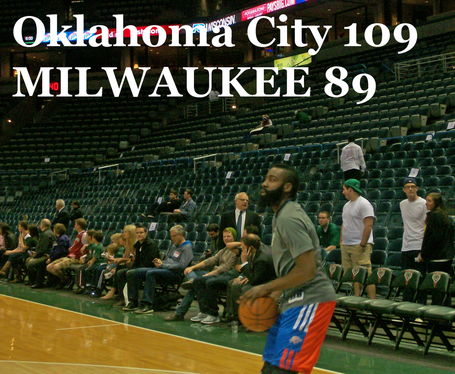 In the end (and beginning and middle), the Bucks are just not in the same league as the Thunder, and when I type "league" I do not mean "conference" in this case. But, that too.

This is not to say that the game was not worth watching after 10 real (so, so brutally real) minutes. But when Kevin Durant sank a three to give the Thunder a 23-10 lead, five minutes and change into the first quarter, the game was settled. The Bucks were down by double-digits -- and through dunks and last-second shots and crossovers and technicals and blocks and through all of the reasons that the game remained worth watching -- the Bucks remained down by double-digits. The Thunder will not visit the Bradley Center again for a long time, which is probably best for the 12 or 13 active players on the Bucks and maybe Coach Skiles, but not for anyone else.

Ersan Ilyasova. Not easy giving player of the game honors to the team's designated rebounder who grabbed two rebounds in 24 minutes -- but here we are, after a 20-point loss. Ilyasova could not find the rebounds he usually finds, but he did stay white-hot from outside. After making 4-4 three pointers in the win over Portland, Ilyasova converted 3-4 three pointers tonight, helping make him the most efficient offensive player on a night when the Bucks were held under 90 points for just the second time since Valentine's Day.

Brandon Jennings. Russell Westbrook finished with twice as many points (26-13), seven times as many rebounds (7-1), and three times as many assists (3-1). But, Jennings crossed Westbrook up and finished the layup for the highlight of Milwaukee's night, and generally gave it a try.

Drew Gooden. Knocked a three pointer and managed to pop in 14 points in 17 minutes. But he was limited to just those 17 minutes despite picking up only a couple fouls, as he appeared in some discomfort even before Kendrick Perkins and Serge Ibaka claimed their territory in the paint.

0:00. Amount of time the Bucks spent in front of the Thunder tonight.

Techs Messaging. Most technicals since December 31, 2001 for the Bucks. Five in all (Sanders 2, Skiles 1, Jennings 1, Dunleavy 1), though Scott Skiles said he expects his to be rescinded, and Larry Sanders made a strong case for his gripe after the game. The technicals were not exactly constructive and so I hate to promote them in any way, but a few points here and there never really mattered in this game. The part that matters here is that the Bucks are fighting for each other rather than with each other.

And for the record, contrary to their good-guy image, the Thunder are tied for second in the NBA averaging 0.7 technicals per game themselves.

Teams like Oklahoma City typically only need one chance to score -- so what happens when you give them two or three chances? Tonight happens.

There are not many classic big men anymore, or many true centers these days. But just about every single one of them has an easy time with the Bucks. Defensive rebounds for the Bucks in the first half tonight were honestly 50/50 balls, as the Thunder collected 10 offensive rebounds while the Bucks collected 10 defensive rebounds. Drew Gooden is not exactly a model of health, and Ersan Ilyasova is usually still alone on the boards.

Thabo'd. Monta Ellis continues to distribute pretty well (7 assists), but he shot just 3-12 on a night when the team needed at least one star performance to combat Kevin Durant and Russell Westbrook. Thabo Sefolosha put the clamps firmly on, registering almost as many steals (7) as Ellis totaled points (9).

Playoff Picture. This game was never penciled in as a win for the Bucks -- maybe only dreamed. But the Knicks beat the Bulls yesterday, so not everything is going as expected prior to Wednesday's showdown (showdown?) between the Knicks and Bucks in Milwaukee. Now the Bucks trail both New York and Philadelphia by 1.5 games. On Tuesday night, New York visits Chicago while Philadelphia visits New Jersey.