I have a love/hate relationship with NBA Mock Drafts. I love examining the process itself -- like what makes people change their picks and opinions long after the most important aspects of each prospect's career are already in the books (the competitive basketball games they played are scouted and on film) -- but I hate how everything quickly becomes a disguised riff on the what the handful of true experts have to say. Draft Express is better than almost anything else you can read for free online. That's the simple truth.

However, it's also undeniably fun to pick and project players as if we have the experience of a professional scout and the power of an NBA GM. I tracked the mock drafts last year, and that will be a project again this summer, but I wanted to start with basic prospect rankings this time.

Raw 2012 NBA Draft prospect rankings carry more weight in my mind. Mock drafts can be muddled with hearsay and "whispers" about who a team liked in workouts, or fear that a team will draft based on need, but the true rankings speak more to the "Best Player Available" mantra that everyone really wants. Straight up, who's going to be the better player? That's what I want to know from draft sites.

Draft Express and ESPN are the big players in terms of original content and scouting notes, so they will go head-to-head in my 2012 NBA Draft rankings post series. Where do the sites disagree? On which players are they aligned? Usually this information just fades into the ether as each site updates their rankings and makes the old versions disappear, but I'm going to track what happens this year. The respective draft boards are analyzed and combined in a single graph, so you can get a good look at how each players grades out.

Here's what's going on: I recorded the big board rankings from Draft Express and ESPN as of 5/12/2012, and complied a chart of the top 20 players on each site. The chart below is organized according to Draft Express' hierarchy (which is why you see the clean diagonal line of full circles) and ESPN is listed side-by-side as an open circle for comparison. The easy thing to remember is that open circles trending to the left mean ESPN is higher on a player than Draft Express, while an open circle trending to the right means ESPN is less impressed than DX.

Here is what the current landscape looks like for the 2012 NBA Draft: 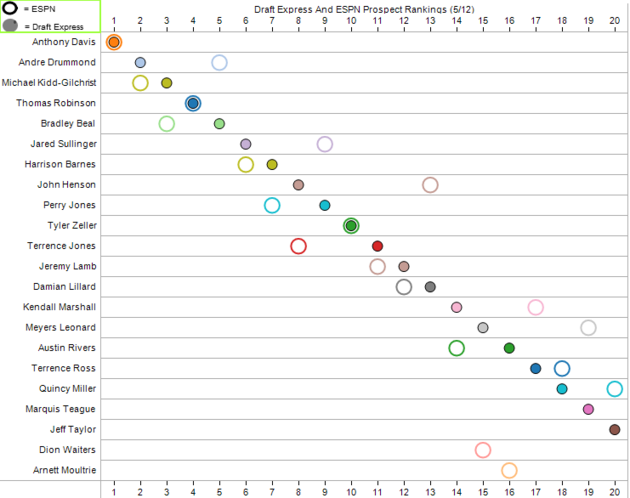 The four players generating the most discord in the top 20 after the NCAA season are Arnett Moultrie (nine-slot separation), Dion Waiters (eight slots) John Henson (six slots) and Marquis Teague (six-slots). Those are big swings, but only Henson is projected to go in the Draft Lottery by either site, so the stakes aren't exactly high.

What's more amazing is that there is so much agreement on the relative value of the top prospects, even though all of those players are underclassmen and need to be projected into the NBA on smaller sample sizes. Terrence Jones (four slots) joins Henson as the only other top 14 prospect where the sites disagree by four or more slots. In a sport where the draft is always filled with lottery busts, it's pretty amazing that both sites are in near agreement on most of the underclassman lottery players.

Maybe the game film really is clear and convincing. Maybe the NBA scouts across the league have yet to influence the process. Maybe the workouts matter a lot for both sites, and the whole landscape will change in the coming weeks. Whatever happens, I will continue to update you on the process, because the process fascinates me.