Ersan Ilyasova, 2012 NBA Free Agency And How A Good Thing Becomes A Problem

Share All sharing options for: Ersan Ilyasova, 2012 NBA Free Agency And How A Good Thing Becomes A Problem

Life as a middling, small-market franchise in the NBA can be strange sometimes. Twenty-four-year-old forward Ersan Ilyasova put together a stunningly efficient and effective career-year during 2011-12 that would normally inspire unbridled enthusiasm and elation among the fan base, but in this case it really didn't. There is a good reason why, too. Without a superstar in sight and just two winning seasons in the past 11, the Milwaukee Bucks can't afford to make any mistakes if they hope to rise out of this rut.

That's why the timing of Ilyasova's sudden surge is a cruel joke for Bucks fans. In the odd tradition of other professional athletes around the world and throughout the FA ages, Ersan somehow managed to set career-highs in multiple categories during a "contract year." I refuse to cast doubt on his effort and motivation during any previous campaigns with the Bucks -- and for anyone to do so would be overly cynical and undeniably unfair to a young, developing player -- but the franchise is left to deal with the clear fact that Ilyasova executed his role as a spot-up shooter and garbage man far better during the last 28 of the season than he has in the other 241 games of his four-year NBA career.

Is the latest 28-game sample an appropriate justification for a contract that could push upwards of $8 million annually? There is an easy narrative here. You can expect to hear it for several months, and it goes something like this: "Ersan Ilyasova is a young NBA role player that finally hit is stride and there's nowhere to go from here but up! He's entering his prime, and if you just extrapolate the trend set in 2011-12 it's clear he's on his way to becoming a productive full-time starter and possible all-star."

In an unrestricted free agent market where talent goes to the highest bidder, that narrative will carry weight. Somebody is going to pay a fairly steep price ($7-9M annually) for Ilyasova. His interview with Stephen Brotherston of HoopsWorld back in February is evidence enough that the Bucks certainly won't be getting a discount:

"When I look at it I have to remember that it's a business," said Ilyasova. "Some teams overseas wanted to buyout my contract but I wanted to finish this season in the NBA. This is where I want to be right now, but we will see what happens in the future. Financially, whoever pays me more will be the team that I decide to sign with."

Let's examine where that leaves a team like the Milwaukee Bucks, and then discuss how high they should be willing to go when the bidding starts.

First off, I enjoy watching Ersan Ilyasova play NBA basketball. He has always been committed to doing the little things on the floor and he rarely steps beyond the bounds of his role as a tertiary offensive option, glass-crashing maniac and strong positional defender (read: defending by getting to the right position on the floor consistently).

However, if you haven't been frustrated by the Turk's lack of consistency over the past three NBA seasons, you clearly haven't been watching Bucks basketball very closely. As a streaky stretch four without any semblance of a post game or off-the-dribble moves, he's basically a binge and purge spot-up shooter from long-distance with the added ability to earn some easy baskets from offensive rebounds and cuts behind the rotating defense...not that there's anything wrong with that.

In other words, Ersan Ilyasova is some twisted hybrid of the best traits from Zaza Pachulia and Mehmet Okur. The most reasonable reaction to his spectacular post-all-star break run is simply this: good for him, but ultimately meh for the Bucks. He's had nice stretches of play before, and there's no doubt there are more nice spurts to come, but three years worth of evidence suggests Esranity was a passing internet craze, not a new reality that will reshape the franchise or the NBA universe at-large. Everyone sets career highs at some point, right?

Ers couldn't have picked a better time to blowupchuate (it's a technical term, just trust me on this one) from a personal perspective. I would also swear allegiance to the highest bidder if I was in his position. If the magical three-point percentage fairy had visited him earlier in the year -- he shot an absurd 50.8 percent (32-63) from beyond the arc during the final 28 games, 38.8 percent (19-49) for the rest of the season and is a career 35.7 percent three-point shooter -- the "same old Ersan" thoughts might be permeating the halls of the organization at the moment.

Then again, something tells me timing has a profound effect on a franchise that is more lovesick for the playoffs than it is resolute in building a true contender. That same hubris is how a 30-year-old lifetime NBA backup named John Salmons made out with a five-year, $39M deal that is still impossible to justify based on the weight of evidence from his career. Is Ilyasova as undeserving as Salmons? No. Would a similar deal be too much money? Probably. Might the Bucks still pony up the cash now and ask questions later? Yup.

John Hammond did address Ersan's impending free agency at the Bucks' end-of-the-year press conference, and some encouraging points emerged from the discussion of that topic. Here's what Milwaukee's GM said:

"Ersan had a great season and you know one thing about Ersan is that you know the one thing you're going to get out of him every single night is effort. He can't help himself, he's going to play as hard as he possibly can every singly night and you can live with that for sure. What he did this year was he just shot the ball so much better than he has in the past, especially from three, and he turned out to be a real stretch power forward, and those guys are so valuable to have on your team, and that's what I think created some value for him around the league, too. It's not going to be easy for us to re-sign him and we know that. But he did have a great year and we're happy for him, and hopefully he'll be right back with us."

Hammond is exactly right to point out the spike in three-point shooting. After 267 NBA games, a statistical principle like regression to the mean should certainly guide any discussion about Ersan's worth, but when it comes to young players in the NBA (even if they have a fairly large sample of games to pull from) that rarely happens. Terms like "upside" and "potential" still dominate the discourse. I took a deeper look into the numbers -- it's kind of my thing, you see -- and I came away with several interesting nuggets about Ilyasova.

The biggest thing that pops out with regard to the distribution of Esran's shots is that things have changed dramatically since 2009-10 in terms of shot selection. There are two important trends worth noting:

If you prefer visual representations, I've created some nifty visualizations of these trends with statistical support from NBA.com/stats that cover Ersan's last three seasons (it's in GIF form, so keep your eyes open for the year-to-year shift):

Could Ersan be as good as the best 28-game stretch of his career going forward? Of course it's possible, but the Bucks can't deal in pipe dreams at this point. They need to set a figure based on a more reasonable projection set by the weight of the evidence to project his future performance and then develop an absolute number for the bidding process. In my opinion, something like four-years, $25M would be a solid deal, while anything approaching the $8M mark annually would be best left for a shorter-term deal. If the bidding exceeds those figures, wish Ersan well with his new team.

Just for the sake of argument, let's also take a closer look at this rebounding numbers, which similarly jumped this past season. Ersan is more crafty than strong and more instinctive than athletic on the glass, and he tends to have a bigger impact on offensive rebounding that he does when it comes to keeping opponents off the boards. Looking at the team rebounding percentages when he is on/off the court, Ilyasova has consistently improved Milwaukee's offensive rebound rate when on the floor, and always raised it to a mark that would be the equivalent of a top-10 team in the NBA.

Unfortunately, he's had trouble making the same impact when it comes to keeping counterparts away from the rim on the other end. When Andrew Bogut was around, the Bucks always finished in the top-10 in defensive rebound rate (ie-keeping opponents off the glass), but this past season they ranked 25th overall and were by far the worst in the league with Ersan on the floor -- the Golden State Warriors finished last with a DRR of 69.14%, while the Bucks only managed a pitiful 66.6% rate (!) with Ilyasova on the floor.

To highlight his impact on the offensive glass but ignore the serious dip in team defensive rebounding (which actually yields an even higher percentage of offensive rebounds to opponents) would be mistake. Rebounding has always been a team function, and while Ilyasova benefited from Bogut's absence by getting to serve as the designated rebound grabber more often, the actual impact at the team level basically balanced out to nothing. If the Bucks had another center things may have been different, but they also would likely have been different with regards to the raw number of boards Ersan grabbed himself, as well. Just something to think about.

Here is how he impacted team rebounding on both ends and in total for the past three seasons:

And finally, here's a look at his individual production relative to an average NBA PF for the past three years, broken down by month (excluding months with less five or less games, due to sample size issues): 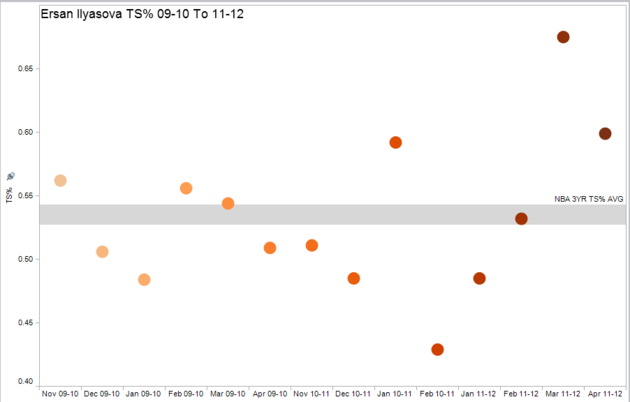 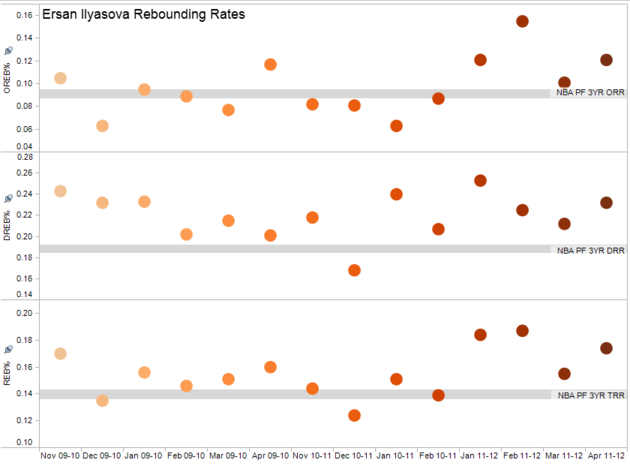 Even if he gets overpaid, Ersan is very unlikely to fall off the map like John Salmons. That makes the whole situation less risky, but the fundamental principles guiding the process are still the same. The Bucks should be hunting for players that create surplus value and defaulting to a developmental prospect when no such veteran can be acquired or signed. Life without Ersan would simply mean a lot more of Ekpe Udoh, Luc Richard Mbah a Moute and Jon Leuer. Is that really a bad thing?

In sum, I wouldn't be incredibly upset if the Bucks signed Ilyasova to a deal that borders on $6M in annual salary, but things start getting dicey around the $8M mark (especially if it went for 4+ years). After a strong finish to the season, Ersan's best moments are the freshest in our minds, but that doesn't mean they are the most likely things to define his future in the NBA. Keep that in mind when the bidding begins.

Statistical support for this story from NBA.com.

*PS- Are you up-to-date on our Podcasts? If not, take a listen using the embedded player below: