In case you haven't heard, the Milwaukee Bucks and Ersan Ilyasova are busy finalizing a five-year, $45 million contract that includes a team option in the fifth year. If you need to catch up, here is my analysis of Ilyasova, Frank's in-depth breakdown and Dan's well-timed plea for everyone to stop and think about the positive aspects of the deal. Now it's time to break down the team's remaining needs in free agency. My initial post analyzed the current structure of the team and highlighted two specific needs, so that's the sensible starting point.

The first was the need for a weak side spot-up shooter to stretch the floor, free Tobias Harris to work in the post and open up better driving lanes for both Brandon Jennings and Monta Ellis. Now that Ilyasova will be signed for close to $9M annually (I'm admittedly working under this assumption), I'm officially crossing this one off the list. It's just that simple. As far as I'm concerned, John Hammond and company believe this problem has now been solved for the long-term. If it isn't, they screwed up.

Strategically, I can see the instant benefit. Even if he regresses on his long-range shooting, Ersan has no doubt caught the attention of the league as a dangerous long-range shooter. Scouting reports have subtly changed from "give soft contest on long twos" a few years ago to "show strong contest at the arc and try to prevent comfortable pick-and-pop looks with his feet set." In any case, defenders will be drawn to the perimeter and weak side with Ilyasova in the lineup, so this will help balance Milwaukee's offense.

As for the second need identified during my free agency primer, the Bucks still have a rather big hole to fill. Let's discuss it further and consider the options available on the open market...

First off, here is the updated depth chart with Ilyasova in the fray: 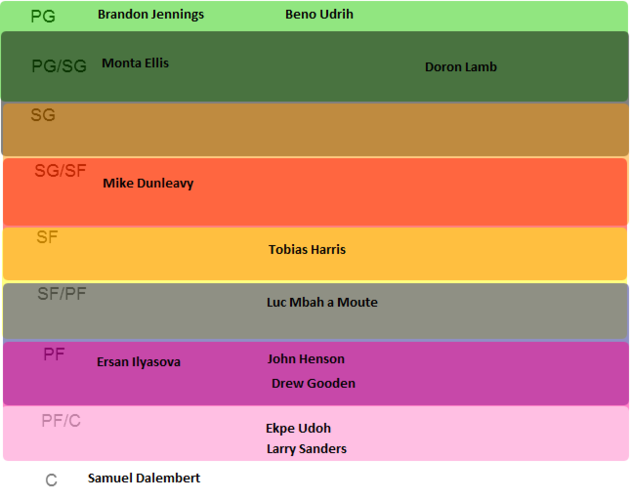 If you have been playing along at home, the only changes I've made from the original version are in the PF slot, where Ilyasova has taken over the starting role and Drew Gooden has shifted laterally to a backup role. Consider this shift the symbolic representation of a great aspect of the signing. As you can see, the SG and SF spots are still sparsely populated, which brings us to the largest lingering need on the roster.

Here is the offensive spacing visualization I created as a guide for exploring roster holes: 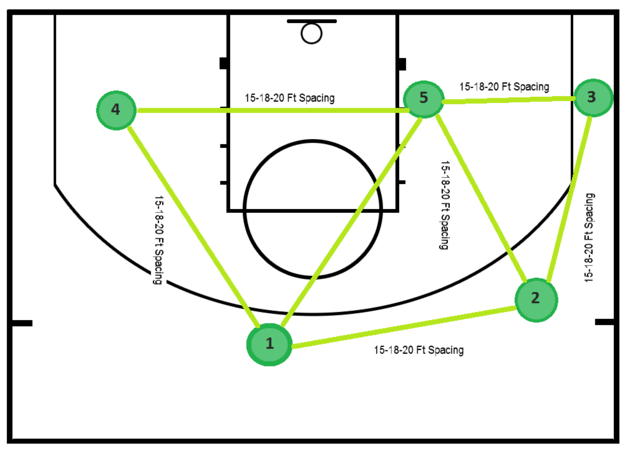 As previous noted, Mike Dunleavy can effectively execute the (3) role in the offense, but there isn't a backup capable of filling minutes at that spot. Tobias Harris only attempted 23 three-point shots last season, and he has shown a better ability to operate in the post than on the perimeter (70.4 percent of his FGA came in the paint), so it's unfair to hold him responsible for stretching defenders to the corners of the court. Luc Mbah a Moute is a 15-foot short corner option at best, and even that's sketchy. In other words, the Bucks need a three-point threat capable of keeping the defense honest. You know, the role Carlos Delfino used to play.

In my opinion, the (3) needs to be able to do the following things:

On offense, (3) must be able to hit the corner three, effectively slash to the rim on two dribbles to beat defensive rotations, finish at the rim and get open via off-ball cuts. Ability to play in the mid-post or low-post is plus. Three-point shooting range is necessary to draw defenders out of the paint and create driving lanes for (1) and (2).

On defense, (3) athleticism to make long defensive rotations to avoid being beaten off-the-dribble by counterpart (3) players is necessary. Any rebounding prowess or shot-blocking ability is a plus, as is the quickness to switch onto a (2) or the size to switch onto a (4).

Though the Bucks flashed an interest in Kirk Hinrich prior to his deal with the Chicago Bulls and they are also said to be pursuing Randy Foye, I don't quite understand the quest to add a combo guard. Jennings and Ellis played 71.4 combined minutes per game as members of the Bucks after the Bogut trade, leaving just spot duty for Beno Udrih, Shaun Livingston and Mike Dunleavy to clean up in the backcourt. Furthermore, the duo played a ton of minutes together -- 79.5 percent of Ellis' minutes (601 of 756 min) came with Jennings also on the floor. That makes the pursuit of smaller combo guards confusing.

I can't see any scenario where the Bucks could put Jennings (6' 1"), Ellis (6' 3") and a combo guard like Foye (6' 4") on the court and expect to matchup defensively with another NBA team. It would be lunacy. The only scenario where it would make a measure of sense is if the Bucks dealt Udrih to fill their need at SG or SF, but to take a top performer from the bench unit last season and ship him off to insert two unknowns into the rotation doesn't quite add up for a team with playoff hopes and dreams. A Beno deal theoretically could happen, but I refuse to enter the wide wide world of unfounded trade speculation.

If Milwaukee fails to add a SF or bigger SG with potency from the corner on offense, things just are one step away from getting very ugly. Mike Dunleavy has experienced problems with his knees before -- he had a bone spur on the patella tendon of his right knee in 2008-09 and played only 18 games before undergoing surgery -- and at 31 years of age the Bucks may not want to bet their season that he will be able to play big minutes for 82+ games. If Dunleavy goes down, it's up to LRMAM and Tobias Harris to provide spacing as a corner three threat, which is an option that's just as ridiculous as it seems upon first glance.

The Bucks only have the mid-level exception and smaller bi-annual exception to work with to fill out the roster, so I've created a list of affordable free agent options that provide (1) size to defend opposing SFs, (2) 16-23 ft range, (3) corner 3 prowess and (4) availability as an unrestricted free agent (don't expect the Bucks to seriously bid on an impactful RFA with just the MLE to offer). How do the names Mickael Pietrus, Gerald Green, Anthony Parker, Matt Barnes, Marco Belinelli, Josh Howard and Carlos Delfino sound? Kirk Hinrich and Randy Foye are included for the purposes of a direct comparison:

Note: Two-Year Adj. +/- comes from basketballvalue.com, corner three-point percentage is from NBA.com/stats and all other information comes from hoopdata.com.

Carlos Delfino is the obvious short-term solution for the Bucks, but it appears he isn't in their plans going forward. Despite his familiarity with the system, rapport with the roster and clear respect from head coach Scott Skiles, Delfino has proven too tempting an option for Skiles to overuse during the past few seasons. After lingering issues with a concussion and a dip in his level of performance in 2011-12, Carlitos may no longer be someone the Bucks can count on from a health or production standpoint. For the record I would be more than fine with him returning in a limited spot-up shooter role (he grades out fairly well above), but it seems the reunion is not meant to be at the moment.

Anthony Parker is the accomplished veteran that may be looking for a bit role as a spacer on offense, and if none of the contenders bite perhaps the Bucks could swoop in and play him behind Dunleavy and alongside Harris or LRMAM when needed. His statistical profile is most similar to Hinrich, and he has been healthy over the last few seasons. This would be a safe bet to work out fairly well, even if upside isn't really part of the equation.

Marco Belinelli is my personal favorite from the entire selection of free agent wings. He is only 26 years old, brings great versatility, has a proven three-point prowess and offers solid ball-handling skills as well (he spent some time playing PG for the Hornets last season even though he stands 6' 5"). He is decidedly not capable of carrying an offensive unit -- he essentially proved this last season -- but if he is allowed to operate as a true role player (ala Dunleavy), things could go very well for him at his next stop.

Belinelli could bring the ball up the floor at times, allow Ellis or Jennings to play off the ball in particular sets or space the floor and draw defenders as a legitimate three-point threat. New Orleans isn't bringing him back, and after making just $3.38M last season he could probably be had for the MLE or slightly less. I would do this move in a heartbeat if the Bucks could land him for something in the $4M range annually.

Stephen Jackson was, is and always will be a talented crazy person. Matt Barnes is also a talented crazy person. S-Jax didn't work out in Milwaukee at all and constantly clashed with Scott Skiles. Barnes could easily do the same. He may come cheap and he can play solid defense while hitting some threes, but I feel pretty confident in saying John Hammond won't spend his last dollars on a potential problem player.

(3) The Complete Shot In The Dark Option (Green)

Gerald Green is the biggest unknown on the list, and perhaps the biggest unknown in the free agency class of 2012. For all the warnings I attached to Ersan Ilyasova, they go double for Green. He flamed out of the NBA after being selected No. 18 overall by the Boston Celtics in the 2005 NBA Draft and failing to properly dedicate himself to his profession, but since then he has apparently become a student of the game. Green may finally understand that he can be one hell of a role player in the NBA, and he elaborated on his new mindset since rejoining the league with Jonathan Abrams of Grantland back in April:

"Everybody wants to be a superstar," Green said. "I understand that probably won't be me. I just want to be a productive player in this league. When I retire, I want people to look at me and say, 'Gerald Green, he was a winner. He brung it every night. He didn't give up. And that's what I want to be about. I want people to remember me not just as a dunker."

If you notice the low percentage of games played number in the chart, it's because Green played only 31 games with the Nets last season (his first NBA chance since 2009). He made the most of that opportunity, as he hit 39.1 percent of his threes, posted a surprising 57.4 TS% and reached a career-high in PER (15.76).

Unfortunately, there just isn't much to go on. It's all a naked projection of clear talents and murky born-again basketball lover anecdotes. The Bucks could provide a great opportunity for Green, but he will have multiple suitors and the price could rise quickly if teams like what they hear from him. I expect the Bucks to get priced out of the market, but if he somehow slips through the cracks of free agency it would be an interesting gamble on a super-talented guy.

You know the names, but you probably don't want to anymore. Howard isn't a clear fit from a need perspective (he's an awful outside shooter), but he brings size to the table. Pietrus can at least shoot the ball fairly well from deep, but why not make another push for Delfino if you get this far down the list of an already diluted position group? Neither guy has much of an advantage over Carlitos on the health or production front, and the Bucks already know what Delfino can bring to the table. This is the "only if Delfino spurns our last-second, desperate plea" pile.