Today the NBA released the official salary cap and luxury tax numbers for the coming year, paving the way for teams to start officially signing players on Wednesday morning. The 2012-2013 NBA season will operate with a salary cap of $58.044 million, while the luxury tax will set in a $70.307 million--just like the last two seasons. For those curious on how the salary cap level is set, check out Larry Coon's exhaustive CBA FAQ. This cap number will officially go into effect at 12:01 am ET on Wednesday, July 11.

Including unofficial estimates for the contracts of Ersan Ilyasova ($9 million annually) and Doron Lamb (two-year minimum deal), the Bucks currently sit about $3.7 million above the salary cap and about $8.5 million below the luxury tax. Those figures also include the now officially-signed John Henson, whose rookie deal guarantees him around $1.8 million this season and $1.9 million next year. They can still make use of the full Mid-Level Exception ($5 million) and Bi-Annual Exception ($1.96 million). Frank stirred up thoughts of the future with this nugget via Twitter:

Summary: if/when Ellis opts out, Bucks are around $21m under cap in summer 2013. Includes $4.3m QO for Jennings, excludes other cap holds.

Hit the jump for a complete look at the Bucks' cap situation and a bit more discussion. 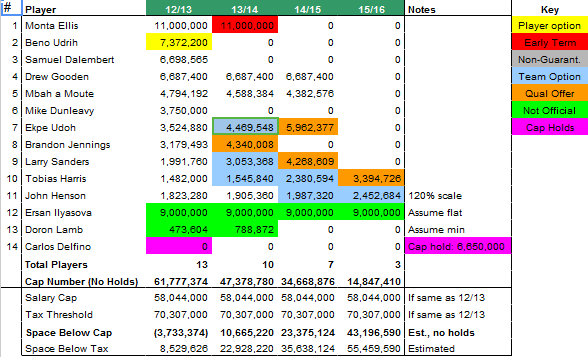 Much of Milwaukee's 2013 cap room will likely get tied up in an extension offer to Brandon Jennings, though he could choose to play under the 1-year qualifying offer and enter unrestricted free agency in 2014. The Bucks will also have to find replacements for Monta Ellis, Samuel Dalembert, and Mike Dunleavy, who all figure to play major roles on this year's squad. But the summer of 2013 could also mark the turning point in the contract of Drew Gooden, who could become a more realistic trade or amnesty candidate at that time. With "only" two more years on his deal after this season, a team looking for veteran frontcourt help might be tempted to put in a modest waiver claim, reducing Milwaukee's obligation to the point where Herb Kohl and John Hammond are comfortable cutting him loose. Alternatively, he should also be easier to move via trade.