Milwaukee Bucks Backcourt Analysis: How Brandon Jennings, Monta Ellis And Beno Udrih Can Get Along

Share All sharing options for: Milwaukee Bucks Backcourt Analysis: How Brandon Jennings, Monta Ellis And Beno Udrih Can Get Along

In case you didn't know, the Milwaukee Bucks are counting on Brandon Jennings and Monta Ellis to carry a big scoring load in the 2012-13 NBA season. With everything quiet on the free agent front and nothing but backups to choose from at this point, that duo will definitely be featured this fall. Although I have my reservations about entrusting the offense to a pair of historically inefficient guards, I'm willing to meet the idea head on and explore how it can best work out for the Bucks.

Beno Udrih figures to soak up some leftover minutes at point guard and shooting guard, but I haven't detected nearly as much excitement surrounding his presence in the rotation. Rookie combo guard Doron Lamb flashed some potential during Summer League play, but he's just 20 years old and he failed to hit a three-pointer in Vegas. To expect Lamb to play a big role on a team with playoff aspirations is a bit pie-in-the-sky for my tastes, so let's focus on the trio of Jennings, Ellis and Udrih. Maybe I can get everyone a bit more excited about Udrih.

Let's start with the basics. Brandon Jennings and Monta Ellis both shoot the ball a lot. Jennings attempted 1122 shots last season, which turned out to be 465 more shots than the next closest teammate -- Drew Gooden finished with 657 shot attempts. In fact, Jennings took more shots than every possible pair of Bucks players combined other than Gooden and Ersan Ilyasova (combined total of 1254 attempts). The same is true of his three-point attempts (except the lone pairing that exceeds his total is Carlos Delfino and Mike Dunleavy).

Jennings shot 41.9 percent from the field -- below the league average of 44.8% -- and 33.2 percent from beyond the arc -- below the league average of 34.9%. If we look at Monta Ellis' numbers from the entire season, the same basic analysis from above applies to him. He shot more often than any other player on the Bucks and converted less than the hypothetical average NBA player from the field and behind the three-point line. These two guys aren't going to suddenly stop shooting in 2012-13. Heck, the Bucks have designed the offense around them.

So how can Milwaukee make the most of this pairing? I can hear at least one of you saying: "but Steve, they make each other better!" Unfortunately, that didn't turn out to be the case during their time together on the court last season. In fact, they produced at rates worse than the numbers quoted above when paired together on the floor. You are free to write off those results using the "they didn't have a training camp" umbrella, but even under that logic there is no reasonable basis to think they make each other better. If you prefer to take it all on faith alone, the Bucks' marketing department salutes you.

Now that everyone is forced to think a bit further outside the box, I submit to you that Beno Udrih just might be the key to the operation. For starters, Jennings' shooting numbers improved significantly when he was played with Udrih last season. The same thing happened for Mike Dunleavy. Ersan Ilyasova also experienced a bump. At this point I'm sure you get the idea: there is more than meets the eye with Beno Udrih.

Then again, what meets the eye isn't exactly bad. Here is a quick, rough-chop analysis of the offensive production for each player over the past two seasons combined:

As you can see, he has been more efficient than Jennings and Ellis over the past two seasons, and he is the only player in the trio to grade out as a positive contributor according to adjusted +/- stats. Before you queue up a "my eyes are better than your stats" comment, allow me to take the analysis a bit deeper to explain why Udrih fits well with spot up threats like Jennings, Dunleavy and Ilyasova on the floor (stats via MySynergySports.com):.

Initial Note: If the decimal points bother you or make you feel like the listed differences in points per possession are insignificant, remember that every point matters. Teams use thousands upon thousands of possessions over the court of a season -- Jennings and Ellis both used well over 1,000 possessions each last season -- so you pretend the decimal places don't exist and just think about things on a points per one thousand possessions basis. Point differential is a basic indicator of success (just look at the standings from last season), so the 67-point spread between Udrih and Jennings over 1,000 possessions has to be considered a big deal. The goal is to outscore opponents, so every point matters.

Udrih grades out as the most effective backcourt player on the Bucks (he owns the highest overall ppp mark), and his best advantage comes as a pick-and-roll ball handler. For those of you familiar with NBA basketball, PnR is how most good offenses systematically break down the defense and open up opportunities for shooters and slashers like Dunleavy and Ilyasova. Those guys shine the brightest with Udrih on the court because he is the most effective PnR player on the Bucks. He is the most dangerous high pick-and-roll option on the roster because finishes well at the rim, has a natural feel for distributing the ball and converts at a high rate in the16-23 foot range.

This isn't to say Jennings and Ellis should take a backseat to Udrih, however. The 30-year-old veteran isn't going to assume a lead role on an NBA offense ever again, but he can help steer the younger members of the backcourt to better opportunities in the upcoming season. Part of the reason Jennings played so well with Udrih in 11-12 is that he moved away from isolation and PnR plays and spent more time as a spot-up shooter (one area where he's fairly effectively as a scorer). Given that Ellis is even better at converting spot-up chances, he may be able to follow along with the trend.

It almost makes too much sense, right? That must be how they've already been operating...right? As it turns out, Jennings spent the commanding plurality of his possessions in PnR and isolation looks over the past two seasons (45 percent combined), while Ellis also spent the most time as a PnR (28%) and Iso (23%) option. As you can see from the chart I've created, that's a recipe for failure. If you would believe it, Udrih has spent more time in transition (15%) than Ellis (13%). That's just crazy.

So how can the Bucks build a better offense for the upcoming season? The basic answer is that Skiles should shuffle the lineups more often. Jennings needs to play off the ball, and Udrih is the ideal PnR man to lead the group of shooters (Dunleavy, Ilyasova, Jennings) on the floor. Udrih could also play with Ellis and do the same thing, with the added benefit that Monta would have Udrih as an effective option coming off-screens or setting up for hand offs during his inevitable slew of isolation opportunities.

Ellis and Jennings will still play big minutes together, but they don't quite fit well enough to make the half-court offense worth running very often. Transition looks will be the key to success for the Bucks' primary backcourt pairing, but hopefully some tinkering with the rotations will help redistribute minutes to include Udrih more often and divert the PnR and Iso looks away from Ellis and Jennings. If you want flash, Udrih isn't your guy. If you want a more effective offense and better production from Brandon Jennings and Mike Dunleavy, he may just be your man.

*Note: If you'd like a full look at the usage breakdown for each guy, here is a little graphic I cooked up to sum up the last two seasons worth of data (via MySynergySports.com): 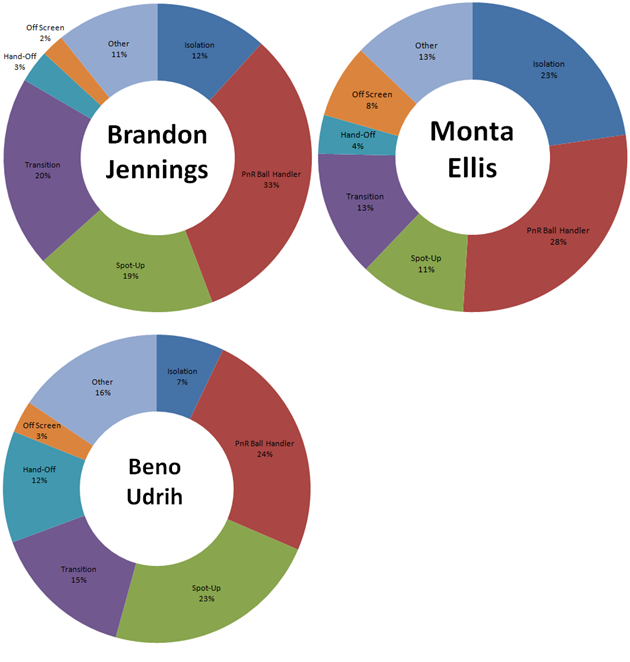