At the outset of the 2012 NBA Free Agency period I called for the Milwaukee Bucks to pursue a three-point threat on the wing (Part 1) (Part 2). Since then the organization has managed to alienate Carlos Delfino, strike out on both Randy Foye and Kirk Hinrich and ignore my preferred option, Marco Belinelli (who signed a two-year, $3.8 million deal with the division-rival Bulls earlier in the week). For a team with urgent playoff aspirations, the failure to add another shooter is confusing.

Here is the crux of my original argument on why the Bucks need another shooting guard or small forward with proven range for the upcoming season:

The Bucks badly need a wing player to space the floor on offense and hit corner threes, because it's a real stretch to think Tobias Harris can step in and keep the defense honest. If Harris is forced into the starting lineup, he could struggle to produce [as a floor spacer in the corner]. Another wing shooter would allow Harris to slide into a hybrid offensive role in specialized second-unit combinations.

...Unless the Bucks add someone else to hit corner threes (like Delfino) or a true pick-and-pop option...things could become very difficult for Jennings and Ellis as driving lanes are cut off by sagging defenders in non-Dunleavy lineups.

I've previously explained why the Bucks are playing with fire by not adding a three-point shooter on the wing. Now I'm going to show you how badly they could get burned if the situation isn't rectified during the remainder of the offseason.

Milwaukee made huge strides on the offensive end of the floor last season, jumping from the bottom of the league up to the No. 15 unit in terms of offensive efficiency (click here for why we use offensive efficiency as the standard). Most of the upward shift in scoring efficiency was offset by an increasingly deficient and decrepit defense, but most people stepped into the offseason feeling good about the Bucks turning into an offense-first team. I think the defense will be a better calling card than offense this year, but only because I see two limiting factors for the offense: (1) finishing at the rim and (2) three-point shooting.

The Bucks (and particularly Brandon Jennings) have been great at avoiding turnovers, but they (and particularly Brandon Jennings) have simultaneously struggled to turn possessions into points at a competitive rate. Over the last five seasons, Milwaukee has finished no higher than 23rd in FG% at the rim. During that same span they managed to end the season with an above-average three-point percentage only once -- finishing No. 12 overall in the 2009-10 season.

To make matters worse, the Bucks had to cut ties with two efficient role players -- Shaun Livingston and Jon Leuer-- prior to the draft, and then they let one of their top three-point shooters (Delfino) walk. If Ersan Ilyasova continues to shoot 45.5 percent from deep everything could be fine, but that's not the most likely outcome to occur. Before I jump forward to next season, let's recap how the Bucks performed as a three-point shooting team in 2011-12: 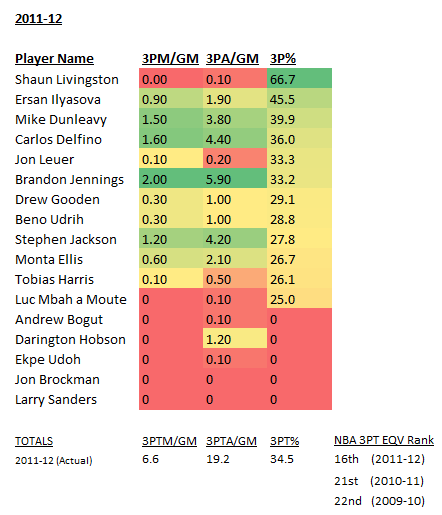 Don't pay too much attention to Livingston's small sample spike, but be sure to take a hard look at how much the Bucks will miss Delfino. Two of the four players on last year's team that shot better than the NBA average from beyond the arc will not be around. Ilyasova can't be counted on to do the same thing again, and even with his elite production the team still finished in the bottom half of the NBA as a team. Let's do some what-if analysis to find out how Milwaukee might perform next year. 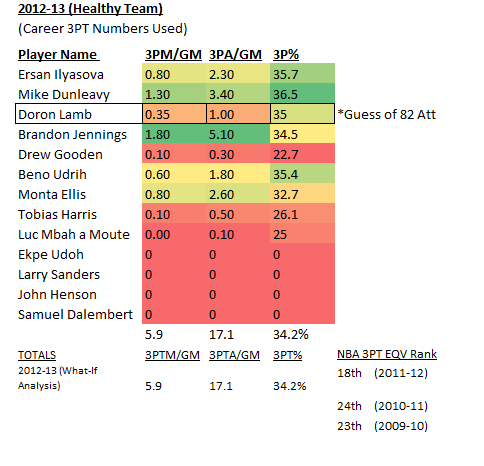 As you can see, if everyone stays healthy and shoots according to their career rate, the Bucks will still only hit 34.2% of threes as a team. As a result, they will likely land somewhere in the bottom half of the league overall (somewhere between No. 18 and No. 24). That's not good enough.

Now at this juncture it would be fair to ask why anyone should care about three-point percentage. The simple answer is that you get an extra point for every make beyond the arc, and the key to being a great offense is to score the most points per possession as possible. The complex answer adds an additional layer of authority to the concept.

Consider this: of the 50 teams that have finished in the top-10 for offensive efficiency over the last five seasons, only four have converted less than 34.4% of their threes. You read that correctly. Only four teams in half-a-decade of NBA basketball have been as impotent behind the arc as the Bucks figure to be next season and still finished the year as a genuinely good offensive unit.

If we expand the five-year list to include all average-or-better offenses (No. 15 rank or better), only six of the 75 teams that finished in the top-15 for offensive efficiency shot worse than 34.3% 3PT. Even more damning is that the four top-ten teams (and thus four of the six top-15 teams) came last season when shooting percentages noticeably dipped due in large part to offseason disruptions caused by the NBA lockout and compressed schedule.

In any case, let's entertain a more realistic assumption... 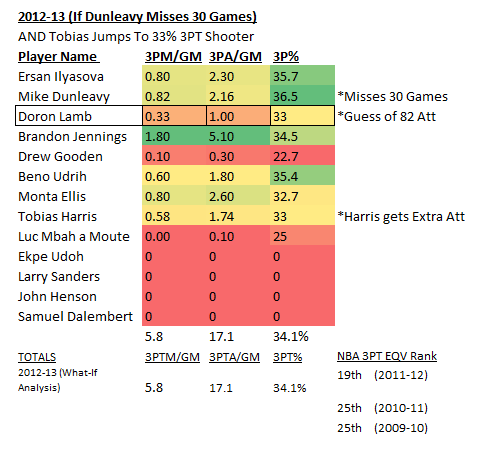 Here we put Dunleavy on the shelf for 30 games and shift the extra attempts to a new-and-improved version of Tobias Harris (an assumption that he becomes a better three-point shooter than Monta Ellis is optimistic at this point). The result? An even worse team mark on triples, likely placing the Bucks somewhere in the lower-third of the league.

The main point is that for nearly any way you slice it, the Bucks (as presently constructed) aren't good enough to be an above-average offensive unit in 2012-13. Everything would have to break right for it to happen. Jennings would need a career year in the paint and from deep, Dunleavy would need to stay hot, Tobias Harris would need to flash a shooting stroke, nobody could get injured and the rookies would have to be contributors from day one. That's a tall order.

If things do break that well next season, Milwaukee will have beaten the odds. But that's the point: they are probably playing against the odds on offense. That doesn't do much to inspire my confidence in the offense. How about you?