At the outset of August, I put together a chart that detailed the projected top-8 players for every Eastern Conference team in the NBA so that we could all make an educated guess as to where the Milwaukee Bucks stood. Then the Orlando Magic gave Dwight Howard away for peanuts and the Philadelphia 76ers slyly worked their way into the blockbuster trade to acquire Andrew Bynum and Jason Richardson. After that seismic shift, it's probably time to revisit the whole process and start over.

The first reader poll from the Aug. 9 article produced very reasonable responses. I've annotated the original results and reproduced them below for the purposes of poll posterity (or something):

With 78.8 percent of votes settling in the six-to-nine range, I'm happy to report that most fans are entering the season with realistic expectations. Let's see if the Howard and Bynum shakeup actually changed anything. Updated Eastern Conference rosters are provided below:

The non-presumptuous alphabetical order from the first version has been replaced by a more aggressive tier system, where green marks sure playoff squads, yellow labels the bubble teams and red brands the lottery outfits. The Chicago Bulls probably belong in the green section, but they dismantled the bench mob and are still no closer to knowing if Derrick Rose will be ready before March. Don't bother getting hung up on the order in which teams appear within tiers, because I didn't intend for this to be an exact ranking of team strength. After all, that's what the poll is for! So take a look look and cast a vote on where you think the Bucks stand. 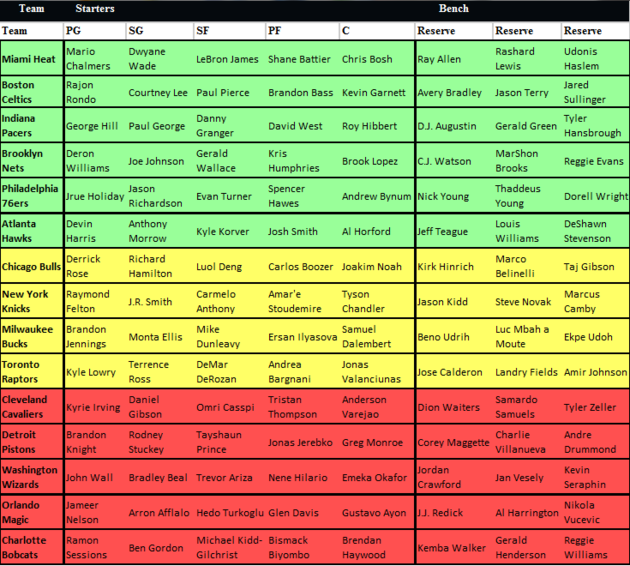