Monta Ellis figures to be the story for the Milwaukee Bucks this season. Can he succeed as a focal point of the offense? Can he coexist with Brandon Jennings? Can he do all of this effectively enough to justify a long-term contract extension with the Bucks?

He'll have a lot to prove this season if such an extension is part of his plans. With his weaknesses seemingly compounded by his backcourt pairing, there's significant reason for concern that this "experiment" will ultimately fall flat. And time may not be on the Bucks' side: if the Jennings-Ellis combo doesn't take hold, the Bucks will have to make some major decisions regarding their roster by the 2013 trade deadline.

All that being said, there were some bright spots last season, and while they weren't exactly numerous, they were fantastically exciting. In part 1 of this series, we took a look back at Monta Ellis's four best games with the Milwaukee Bucks in an attempt to identify the best of the best. Now let's examine one of those games. What were the keys to success, and how can Ellis and the Bucks consistently replicate it?

I know, I know, the New York game won the poll from part 1, but y'all know I only put those polls in to placate the masses. Maybe I'll get to that one later...

The Bucks entered this game two and a half games behind the New York Knicks for the final playoff spot in the Eastern Conference, and welcoming a streaking Hawks team didn't look like a promising way to close the gap. Atlanta had won four straight games, most recently a 139-133 quadruple-overtime win over the Utah Jazz. After a series of lackluster performances to start his Bucks career, unrest was at the high-water mark regarding the Andrew <REDACTED> trade. If there was ever a time for Monta Ellis to show off his ability, it was that night. Scott Skiles had a feeling Ellis would deliver:

It wouldn't surprise me at all for him to have a big breakout game at any moment.

Breakout he did. Ellis scored 10 points in the first quarter, making 5 of his first 6 shots. His only rest came in the first seven minutes of the second quarter. After halftime, he added another 21 points, including 17 in the final quarter as the Bucks held off an Atlanta rally. Ellis played every minute of the second half and chipped in 6 assists and 3 steals for good measure.

How He Did It.

Obviously making five of eight long jump shots offers an immediate boost to any shooting line, but it isn't entirely fair to just chalk Monta's performance up to luck. For starters, his shot distribution against Atlanta was actually preferable to his typical distribution while with the Bucks, with 33% of his attempts coming from "evil" range vs. 37% in an average game. What's more, scouting the game on MySynergySports.com reveals that two of his jumpers were essentially unguarded, while two more were fadeaways from post-ups, a shot Ellis is very (too?) comfortable taking. There were a few of his trademark contested-stepback-jumpers, but nothing too egregious.

Ellis's plays break down as follows, with details for each:

No big surprise with the transition shooting, where Monta's athleticism and speed makes him extremely effective. He did settle for some quick pull-ups in isolation, but also drew a pair of fouls to balance things out.

Where Ellis truly stood out against the Hawks in this game was in the post and pick-and-roll. Beyond his 80% shooting, he also dropped a phenomenal assist to a cutting Larry Sanders while posting up Willie Green. Much of the credit goes to Sanders for making a decisive cut when his defender went to double Monta, but the over-the-shoulder pass was spot-on (it had to be, or Sanders likely would've bobbled it).

In the P&R, Monta converted a nice reverse layup after turning down a Drew Gooden screen. The key? This play could be described as a delayed-transition look, as the Atlanta defense was still getting set. Monta hit Joe Johnson with a quick fake then blew around him to finish an uncontested layup--nobody else was within five feet of the basket. But Ellis actually did much of his P&R damage as a distributor. He set up a short Ekpe Udoh jumper and Luc Mbah a Moute layup as the P&R ball handler, and dished out three more assists to spot-up shooters after using a pick. There's a disclaimer: two of those assists came on long Mbah a Moute jumpers, making them far more lucky than reliable. But the third, a wide-open look from behind the arc for Brandon Jennings, was a picture-perfect example of how Jennings and Ellis can best play off each other: 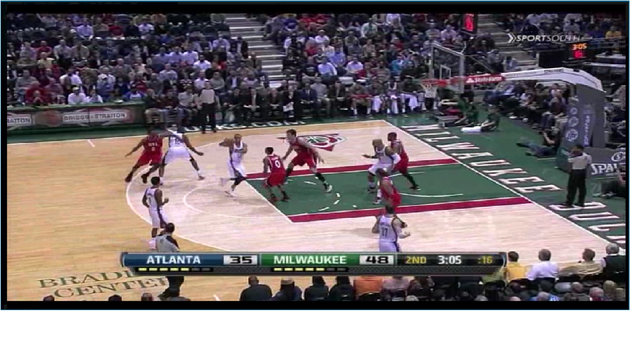 Ellis is better at attacking the rim and drawing defenders, while Jennings is a strong three-point shooter when he gets good spot-up looks. On this play, Monta used a Mbah a Moute screen to attack the middle of the lane. While his defender (Joe Johnson) goes over the pick, Ellis draws Jennings' defender (Jeff Teague), who goes to help on the penetration and leaves Jennings wide open for the shot. Two of Ellis' other assists could reasonably be considered draw-and-kick dimes as well.

There's little doubt that such a play style is exactly what the Bucks want to see from Ellis. So much of the negative elements in his game come about from his trigger-happy tendencies: a sliver of daylight from mid-range and he's more than willing to pull up for a jumper. So when he forgoes those tough shots for more slashing, good things happen.

Defensively, Ellis didn't spend much time checking Joe Johnson, whose size would likely have given him much more trouble (JJ dropped in one easy layup off a deep post catch, basically just walking over Ellis). He had a slight tendency to got lost in screens or over help off his man, leading to a number of running closeouts. But he also recorded a great steal leading to a breakaway dunk, plus another fast break started by Jennings' ball pressure. There's always going to be some give-and-take with Ellis on defense, it's just a matter of matching him up with the right opponent and covering for the risks he'll take. That should be easier to do this season with a more capable defensive frontcourt behind him, but it's surely something Scott Skiles will look to curb as well.

How He Can Do It Again.

The simple truth is that Monta has all the tools to produce games like this with far more regularity. It's all about his approach. Fewer rushed shots that bail out the defense, more drives to the basket with an eye to setting up his teammates. This is especially true when he plays alongside Brandon Jennings, who can be freed up to play off the ball more often.

In addition, the Milwaukee offense needs to continue its shift toward a transition-based attack. With a little luck the defense and rebounding will take a step forward, potentially granting more opportunities. But even the halfcourt offense can be quickened, favoring the type of delayed-transition plays that Ellis and Jennings can thrive in. Truth be told, the Bucks are still a fairly young team, stocked with athletic forwards who can run the floor. They'll have to get better in the halfcourt to realistically break into the upper echelon of offensive squads, but hopefully a more balanced roster will help in that regard.

On defense, the name of the game is compensation. His size and aggressive tendencies will stress his teammates on occasion, but he'll also create some easy points off steals. Ironically, playing in front of a defensive eraser like Andrew <REDACTED> would be a huge help, but at least he'll have no shortage of shot-blockers watching his back.

In the end, the story remains the same with Monta Ellis and the Milwaukee Bucks: a pair with talent, to be sure, but talent that needs to be applied the right way. On this night against the Atlanta Hawks, Bucks fans got their first real taste of what Ellis can offer when he's at the top of his game. Here's hoping there's more to come.