Share All sharing options for: LeBron James vs. Luc Mbah a Moute, A Defensive Impact Study

What are you doing?

I've combined three seasons worth of stats for each player in a select group of top-end perimeter scorers (LeBron James in this edition), and compared production levels to when Luc Mbah a Moute is on the court with that player. The assumption is that LRMAM is often matched up against that player, or that he makes a direct impact on that player's production. If we can't assume that much, what's an ace perimeter defender good for anyways?

What does it mean?

The sample size for each on-court "matchup" is too small to be predictive of future performance -- LRMAM and LeBron have shared the court for 249 minutes (more than five full games) over the last three years -- so the findings are merely descriptive. In other words, this is a strict evaluation of what has already happened, not any grand pronouncement that future matchups will proceed along the exact same lines. The data here is fit to answer the question: how has LRMAM impacted LeBron James' performance when they have shared the court over the last three seasons.

What did you find?

In addition to crunching the numbers, I watched a lot of video clips of LeBron vs. LRMAM as well. Two things stuck out to me while watching those plays:

Here are the actual numbers, presented in infographic form to spice things up (click to enlarge): 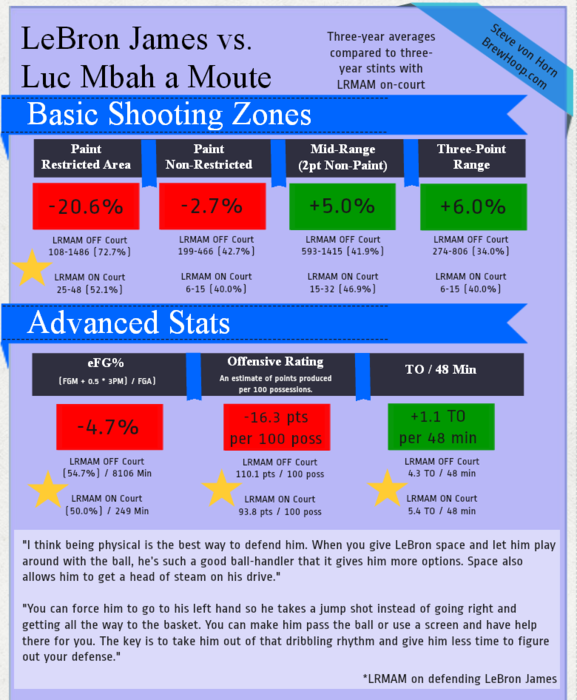 Finally, I've included a clip that I think represents LRMAM's approach on LeBron: