In case you didn't know, the Milwaukee Bucks open training camp in under a month, and fans of the franchise are less than two months away from watching the regular season opener against the Boston Celtics on Nov. 2 at the TD Garden. Have I blown your mind? Okay, so genuine NBA news in late-August and early-September isn't exactly easy to come by, but I've been combing over some of the numbers from the 2011-12 NBA season and thought it might be fun to pass along stuff that interested me.

For this random stat series, I've broken down stats for the top-100 NBA guards according to minutes played in the 2011-12 season. If you are having trouble putting that list together in your mind, here is a look at the entire group of players that qualified for my inquiry:

Efficient scoring in the NBA is usually underpinned by scoring from two regions on the floor: (1) shots in the painted area and (2) three-point shots. Why? In the paint, players convert two-point attempts at higher rates than anywhere else on the floor and as an added bonus they are far more likely to draw shooting fouls in the paint than they are farther away from the rim. When it comes to threes, the extra point awarded for each make more than offsets the lower shooting percentage. Simple enough, right?

Well it's really not very simple for most players. If it was easy, everyone would score efficiently with ease. In reality, players are working with different skill sets and physical talents that lend their game more heavily towards either an attacking style or a long-range sniper style. The players who get the most out of their gifts are the ones that truly thrive in the NBA. With all of this in mind I've put together some stats on where players take the majority of their shots and some breakdowns what percentage of each of their total points from fastbreaks, restricted area makes in the paint and non-restricted area makes in the paint. Brandon Jennings, Monta Ellis and Beno Udrih get special treatment in each category because they are Bucks players. Here is some of what I have uncovered: 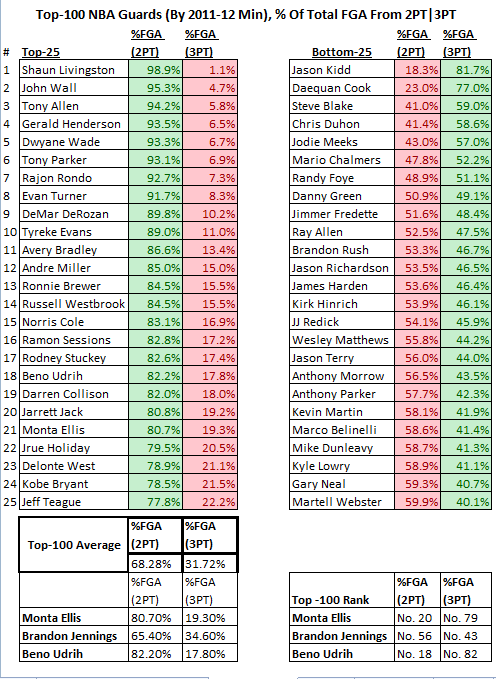 (1) It's somewhat comforting to see that Monta Ellis is smart enough to know he's not a good three-point shooter, so he takes the vast majority of his shot attempts from inside the arc. This measurement treats Monta a bit kindly by clumping all two-point attempts together, however, because he also has the 17th-highest percentage of total points that come from mid-range shots (among the top-100 guard group). In fact, you could argue most guys on the top-25 list have a problem with taking too many long twos. Mid-range shots aren't a great way to score points, so the positive vibes from the basic split don't really endure unless the player gets into the paint a ton and draws a lot of fouls. Interestingly, the same argument applies for Beno Udrih. More on the distinctions between Ellis and Udrih will emerge in Vol. 2.

(2) The top-25 list has a whole lot of guys who you don't want taking deep outside shots, but some very effective players make the list (Tony Parker, Dwyane Wade, Rajon Rondo, Andre Miller, Russell Westbrook). Those guys get into the paint, finish well and/or draw a bunch of fouls. Just something to keep in mind.

(3) John Wall's extreme splits should probably be considered a partial indictment of his shooting range and a partial endorsement of his self-awareness.

(4) Jason Kidd is a shell of his former self, and the fact that he attempted the lowest percentage of shots inside the arc of any top guards from last season speaks to the fact that he can't get past people and can't finish on the break anymore.

(5) James Harden and Kyle Lowry take a higher percentages of threes than I would have guessed. Nearly everyone else on the bottom-25 list is considered a three-point specialist. 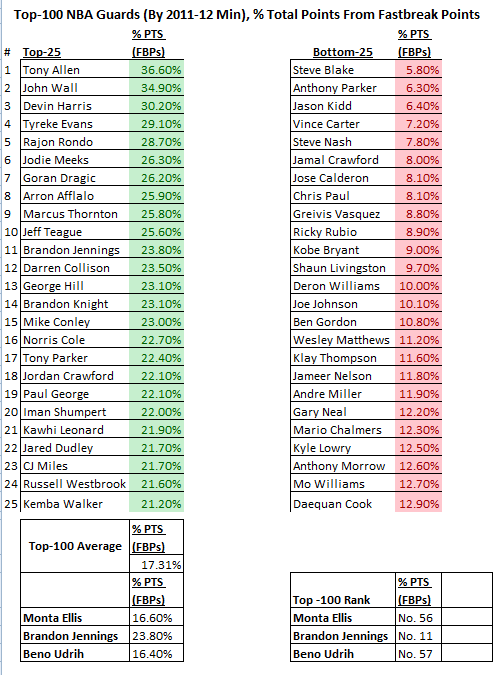 (1) Monta Ellis scores a lower percentage of points on fastbreaks than the average guard from this top-100 group? Really? Beno Udrih nearly matches Monta Ellis in fastbreak point distribution? That blows my mind. It doesn't necessarily mean the Bucks are in trouble, but Ellis doesn't rely on fastbreaks nearly as much as you might expect.
Brandon Jennings loves to run, which says the Bucks are right to turn up the tempo and let him try to get easy buckets on the break (hint: look back to my Feb. 9, 2012 section). If Jennings wants to build on his progress last season, it appears any bump in efficiency could be built on breaking down defenses that haven't had a chance to get back or set up in the paint.

(3) Steve Nash doesn't need fastbreaks to be great. He's getting along just fine even with one of the lowest percentages of fastbreak points for NBA guards, thank you very much.

(4) I expect Deron Williams and Joe Johnson will disappear from this list for 2012-13. They should not be in the bottom-25. Especially not Williams, who excels on the break and made his stardom a reality by running early and often in Utah.

(5) The Atlanta Hawks played at the No. 22 pace in the NBA last season, but with Devin Harris on board and Jeff Teague still around -- both PGs are in the top-25 for percentage of points from fastbreaks -- expect Josh Smith and the Hawks to run more often and push the pace a bit.

Next up for this group will be a breakdown of scoring in the paint...
*Note: Statistical support for this story was provided by NBA.com/Stats