Points In The Paint Stats For Monta Ellis, Brandon Jennings And 98 Other NBA Guards (Vol. 2)

Share All sharing options for: Points In The Paint Stats For Monta Ellis, Brandon Jennings And 98 Other NBA Guards (Vol. 2)

It's the second installment of my random stat series where I've broken down scoring splits and other numbers for the top-100 NBA guards according to minutes played in the 2011-12 season. In the first installment I covered how different guards distributed shot attempts by looking at the percentage of attempts from inside the three-point line and beyond the arc for each player. Now I've decided to focus on how guards scored in the painted area during 2011-12, with an emphasis on what percentage of points came from inside the paint and how each player performed in the restricted area (inside the charge half-circle) and the non-restricted area. The list of 100 guards is once again posted beyond the jump along with some interesting nuggets that caught my eye. Oh yeah, and Milwaukee Bucks guards Brandon Jennings, Monta Ellis and Beno Udrih all get some special treatment.

*Note: An exhaustive list of the top-100 NBA guards determined by minutes played for the 2011-12 NBA season has been placed at the bottom of this post, in case you want to make sure that all the meaningful players in the league made the cut.

After breaking down the the basic distribution of points scored (2PT vs. 3PT) for each guard in Vol. 1, it's time to check out what each man accomplished in the paint. Ellis and Udrih each attempted over 80 percent of their shots inside the arc, but do they really have a decisive edge over Jennings when it comes to performance in the paint? For that matter, which guards are dominant in the paint and which ones struggle? Let's take a look! 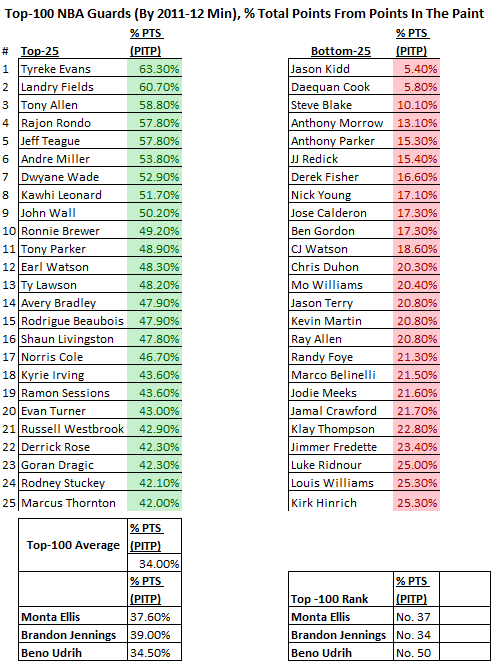 (1) As noted above, Ellis and Udrih each attempted over 80 percent of their shots inside the arc -- compared to 65 percent for Jennings -- but it's Jennings who scored the highest chunk of his total points in the paint! Hey Brandon, try to spend more time working your way into the paint. Sound good? Good. Anyways, all three guys rate as above-average in paint scoring distribution, so it would be unfair to come down too hard on any of them.

(2) Landry Fields scored in the paint a lot more often than I thought he did. He really had the second-highest split for an NBA guard from last season? Fields spends most of his time shooting from beyond the arc and inside the paint, so even if you think the Raptors shelled out silly money to land Landry, you can't deny that they added a smart player. I like his approach.

(3) Tyreke Evans scored a higher percentage of his points in the paint than Jason Kidd, Daequan Cook, Steve Blake, Anthony Morrow and Anthony Parker combined during the '11-12 season. That's just nasty. I can feel a kinship with the rest of NBA fans around the world when I say that I really hope Tyreke Evans tries harder and puts it together this year.

(5) Kudos to Ty Lawson and Earl Watson for scoring so much in the paint despite a small stature and a lack of explosive leaping ability. Most of the other guys can't shoot well from the perimeter and have a lot more size to attack interior defenders, so those splits make a lot more sense. 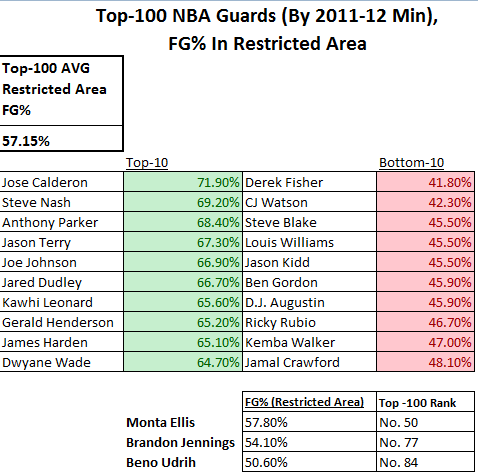 (1) Monta Ellis has a better combination of athleticism and quickness than Jennings and Udrih, so it's nice to see that he managed to produce the highest shooting percentage in the restricted area. However, Ellis is barely above-average in restricted area and the other two land in the bottom quartile of the guard group. It's not a good sign for anyone, especially because Ellis (soon to be 27) will see his athleticism decline as he approaches 30 years of age.

(2) The crafty old men are here to make basketball purists proud. Jose Calderon, Steve Nash, Anthony Parker and Jason Terry have no business grading out as the top-four guards in the NBA for finishing in the restricted area, but they managed to do it anyways.

(3) The other no-so-crafty old men are here to make basketball purists sad. Derek Fisher, Steve Blake and Jason Kidd turned their years of NBA experience into a reminder that savvy can only get you so far sometimes. 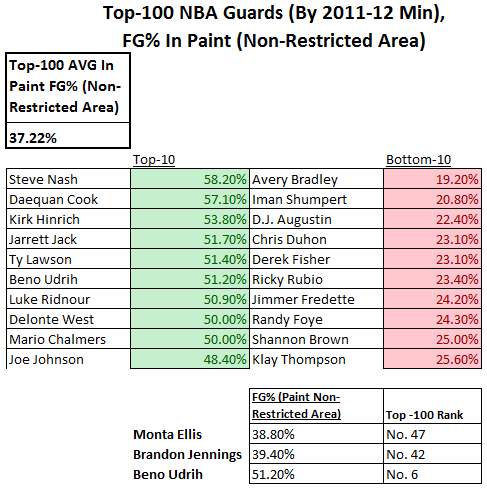 (1) Beno Udrih somehow managed to shoot better outside the restricted area (51.2%) than he did directly at the rim (50.6%) last season. That is actually an impressive feat in this case, because he shot 13 percent above the top-100 average in the non-restricted area of the paint and ranked No. 6 overall. He may not have a signature move or a flashy floater, but Udrih knows how to get the most out of his opportunities in the paint.

(3) Ricky Rubio joined Derek Fisher as the only other player to land on both bottom-10 lists. Fisher is understandable, but Rubio is a 6'4 guard in his physical prime. Sure he only played in 41 games last season, but the trend with his poor paint scoring is disturbing. This will be something to watch when Rubio makes his comeback in 2012-13. 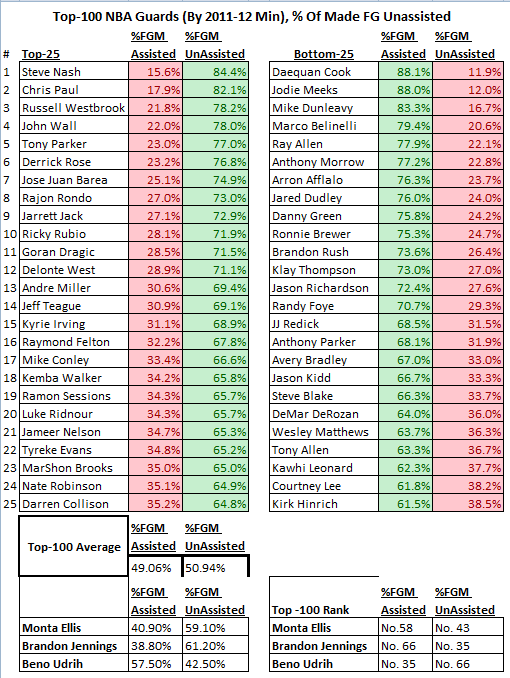 (1) Steve Nash doesn't need your help either! He's just an offensive marvel. That's all there is to it.

(2) Mike Dunleavy clocked in as someone who needed help from his teammates (83.3 percent of his made field goals were assisted in '11-12), but he spent a lot of time working to get himself open by running off screens. His split doesn't mean the same thing as it does for someone like Deaquan Cook, who is more dependent on star players drawing his defender away for standstill looks.

(3) Brandon Jennings and Monta Ellis take matters into their own hands more often than most players, but neither guy managed to crack the top-25. I tend to think that is a good thing, but the list suggests that creating one's own opportunities can be a virtuous undertaking for a point guard or primary ball handler. I like most of the guys that appear on that top-25 list, Nate Robinson and Kemba Walker notwithstanding. Maybe I will take a closer look at this aspect of scoring before training camp rolls around.

*Note: Statistical support for this story was provided by NBA.com/Stats