Milwaukee Bucks Lineup Pyramids, Vol. 5 | What do the Bucks want to be?

The Milwaukee Bucks are currently in position to battle for one of the last playoffs spots in the Eastern Conference. As the Feb. 21 NBA trade deadline approaches, we will hopefully learn more about what this organization wants to become.

Share All sharing options for: Milwaukee Bucks Lineup Pyramids, Vol. 5 | What do the Bucks want to be?

Here we are again, Milwaukee Bucks fans. The team is on track to compete for one of the final playoff spots in the Eastern Conference, so it's unclear what the front office will be willing (or able) to do before the trade deadline. The possibilities would be fascinating if the organization hadn't already proven itself to be stubborn in its ways during the deadline drama over the past several seasons.

The deal for John Salmons still lives on as the most impressive mid-season move -- as the Monta Ellis trade didn't produce a playoff berth -- but even that deal turned sour as Herb Kohl and John Hammond imagined it to be a fast track to perennial six-seed status during the off-season and re-signed Salmons to a terrible deal while they also added Drew Gooden on a long-term contract. That series of moves might be the Bucks in the nutshell. Hopefullly the story will change at some point, and it will be very easy to tell if a paradigm shift occurs before the deadline this season.

Milwaukee has movable pieces. Mike Dunleavy and Beno Udrih are on expiring deals, and both guys are veterans who are comfortable coming off the bench (contending teams should be salivating right now). Samuel Dalembert is seven feet tall, so it really doesn't even matter he's been underwhelming on defense this year. Monta Ellis scores a bunch of points and makes some people in this world very happy, and he holds an early termination option that may make him an expiring contract. Meanwhile, Ersan Ilyasova has a really cool stretch of games from the second half of the 2011-12 NBA season that can be fun to think about sometimes.

The problem is that dealing away any of those guys, save Dalembert, probably takes away from the team's chances to make the playoff bracket in the East. Dunleavy, Udrih and Ilyasova are three of the four (!) Bucks players with a positive net efficiency rating so far this season (see below). The other player is Drew Gooden. In essence, the most valuable veteran players on the Bucks would be difficult to part with precisely because they are some of the most valuable pieces on the team. Then again, Dunleavy and Udrih are the only guys who have the potential to bring back an interesting piece or two for the future.

Ilyasova isn't all he's cracked up to be, but he's still a valuable contributor, especially on a squad like this one that's starved for outside shooters. Take away Ilyasova and suddenly the only big on the roster who can consistently stretch the floor is Drew Gooden. For a team that rarely considers taking even half-a-step backwards, it would be hard to part with Ilyasova during a playoff push.

In reality, the Bucks are at a crossroads again. The phrase tank doesn't belong in this discussion, so don't invoke it. It's a red herring in the Eastern Conference, where you quite literally can't tank. There are already enough terrible teams to soak up the top spots in the lottery, and the middle of the conference is so meh that the Bucks might be able to accidentally take the eighth seed. The signs at this crossroads are marked: (1) stay on the same path from the past decade for another half season and (2) do something bold to help plan for a better future.

No. 1 isn't worth rehashing; it is what it is. No. 2 is something I think a lot of fans could get on board with this winter/spring. The "something bold" in this case would be do deal away a top asset listed above (Dunleavy, Udrih, Ilyasova, Ellis) in a package headlined by a future prospect/pick and some other cap-matching stuff that doesn't matter as much. The upshot of this approach would not be the immediate return. It would be the flexibilty provided to experiment with young players on the roster.

John Henson and Tobias Harris are the two most exciting prospects on the roster -- because Larry Sanders and Brandon Jennings have already arrived -- but they clearly have defensive deficiencies at this point in their respective careers. Playing time has been sporadic, but only because the Bucks can't afford to let them play though the mistakes in games the team is desperately trying to win for the sake of a playoff push.

If Milwaukee were to ship out productive vets, it would open up minutes in the rotation, make the team less competitive in the near-term and provide an great excuse to actually play the young guys with a purpose. The organization could get swaths of NBA game film and statistical evidence on both guys that they otherwise wouldn't be able to generate this year. The process would help the front office pinpoint their strengths and weaknesses as a team heading into the offseason. If things went well, the Bucks could still make the playoffs. If things went the other way, the GM would have a better idea of what role Henson and Harris could realistically play on future teams with higher aspirations.

The NBA trade deadline is Feb. 21, so keep these thoughts and ideas in mind if trade rumors start to emerge. Here is your bi-weekly update on Bucks lineups. Note where Harris and Henson land on the net rating graphic below this paragraph if you're having trouble digesting the argument I presented above.

If you need a primer on what these numbers mean, be sure to check out the rest of the Lineup Pyramids series. 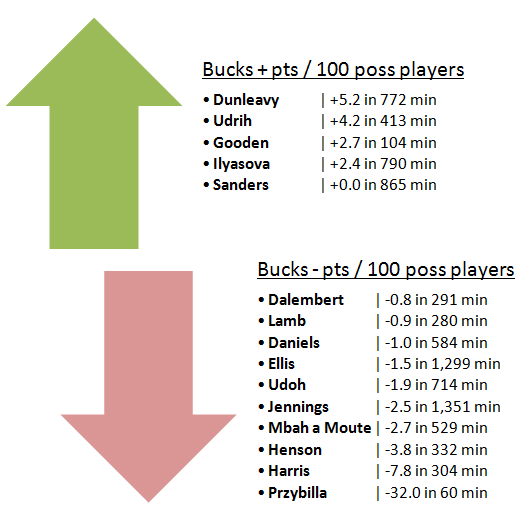 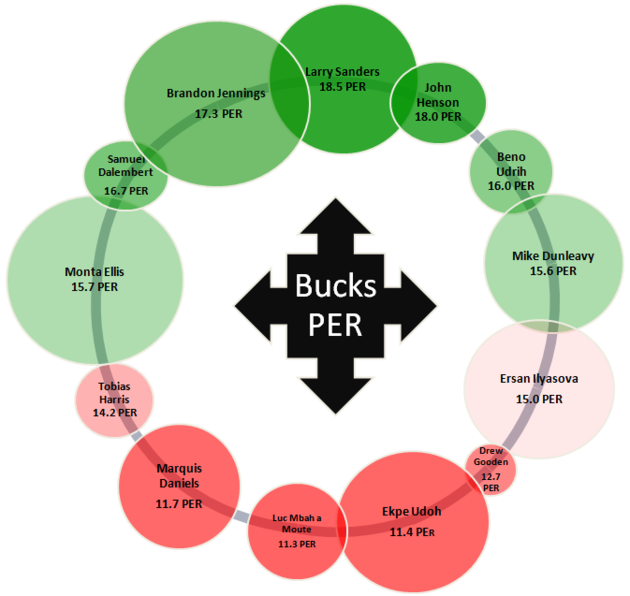 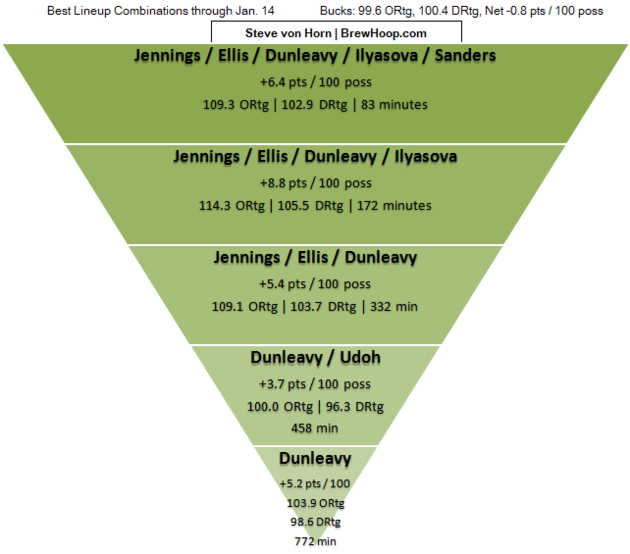 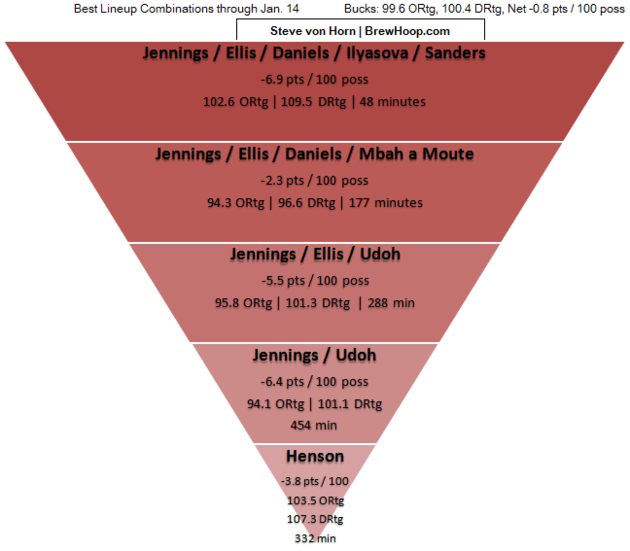