The Milwaukee Bucks start their West Coast road trip in Los Angeles, taking on a Lakers team saturated with star power and media coverage, yet void of the production to match.

Share All sharing options for: Bucks vs. Lakers Preview: More Bravo than Showtime

On the Lakers: Silver Screen And Roll | Forum Blue And Gold

Lakers update. Los Angeles took 336 minutes to tally their first win of 2013, blowing out the lowly Cleveland Cavaliers 113-93 Sunday night and snapping a six game New Year's losing streak. The Lakers are on the outside looking in with a 16-21 record (or 1-0, if you trust Mike D'Antoni). Really, 16-21 in the Western Conference equates to about a 19-17 record in the Eastern Conference, which happens to be the Bucks record. The Lakers are scoring the most points (105.3 ppg) and allowing the most points (109.1 ppg) in 2013, thanks to a passive/less-than-100% Dwight Howard, razor thin bench depth, and Kobe Bryant defending like someone with 43,808 minutes of tread on his tires. With that said, Milwaukee's proclivity for inconsistency probably renders these statistics moot.

Pau Gasol, Steve Blake out. Gasol has already been ruled out for his sixth straight game (concussion) and Blake is getting better at breathing without wincing (abdominal tear). Even without Gasol's size and Blake's range, the test doesn't drop from 12th to 6th grade in difficulty. The Bucks' lanky Tube Men had major problems defending the prodigious girth of Greg Monroe, Jason Maxiell, and Andre Drummond. Even with Dwight Howard mired in a down year on both sides of the ball, he's still light years better than that trio. Historically, Howard assaults and batters the Bucks regularly (19.3 ppg, 13.4 rpg), but they also force him to put the ball on the floor, to distressing results (career high 107 turnovers in 27 games).

The Larry Sanders and Brandon Jennings show. Monta Ellis may have it all, but Jennings and Sanders have stolen the spotlight over the past couple weeks. Jennings won the Eastern Conference Player of the Week award this past Monday, but he's been a revelation of efficiency in the team's first seven games of 2013 (22.4 ppg, 44.6% fg, 43.6% 3fg, 91.4% ft, 6.3 apg, 3.3 rpg, 1.8 spg). Below is his Christmas tree-colored shot chart over that span: 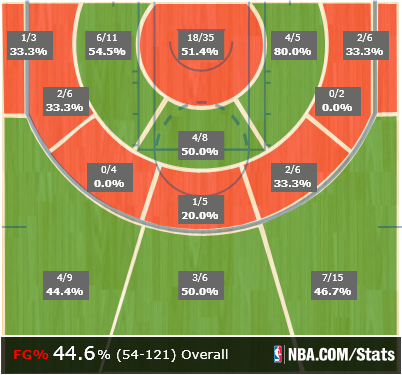 Likewise, I would be remiss if I didn't mention the whirlwind of awesome, much-deserved coverage SB Nation has afforded the affable Larry Sanders over the past couple weeks. To spare you the guessing game that is clicking on embedded, in-text links without explicit context, here's a quick run down of everything you may, or may not, have missed in regards to the NBA's most prolific, fan favorite shot blocker: