John Henson, Larry Sanders, and the quandary of playing time

Milwaukee Bucks rookie power forward John Henson has put together a couple impressive offensive games against elite teams this season, but few expect Scott Skiles to increase his role. The reason for doing so is logical, yet undesirable.

Share All sharing options for: John Henson, Larry Sanders, and the quandary of playing time

That's the general talking point weaving in and out of Bucks conversations today, certainly not without some merit. No Milwaukee big man is a reliable option in the post, and all but one of Henson's 10 makes against the San Antonio Spurs came from a diverse collection of shots taken within 8 feet of the rim.

Skiles even called his collection of hook shots, off-dribble finishes, and footwork-driven lay-ins "NBA plays." So why do we expect Henson to relinquish his role as a garbage time rookie? The answer, somewhat ironically, is the reason we want him to play in the first place: defense.

"John has put together three to four good practices in a row. He's been consistent," Skiles said. "He's upped his work ethic in the past month or so. He deserved a look and he did a nice job with it offensively. He's a skilled offensive player. He's become a little bit more serious."

That quote comes with a "yeah, but..." reminiscent of Skiles' comments about another mid-first round draft pick that took some time to cultivate his lengthy, raw talent.

"They were also going right at him in the pick-and-roll game time after time after time," Skiles added. "But it was a good step forward for (Henson) against a good team."

In Henson's "defense," Tony Parker basically announced over the PA system that the pick-and-rolls were coming, and still no one could stop them. However, Skiles isn't wrong in his assessment of Henson's progression as a defender.

According to NBA.com, the Bucks have a defensive rating of 116.2 when Henson is on the floor. Likewise, Henson's Net Rating is -11.7, second only to Joel Przybilla (-32), and he's allowing 1.18 PPP, according to Synergy Sports. Skiles' general rule of thumb (to a frustrating fault) is that defensive reliability earns minutes, and Henson's lack of girth doesn't mix well with his struggles picking up Skiles' system on both ends.

Henson acknowledged this learning curve, and actually referenced a lack of playing time as a crucial part of slowing the game down for him.

"I think hanging around the perimeter, I did that a little too much early on," Henson said. "Being around the basket and diving, and being ready for the guards, finishing for them."

"To be honest, I think sitting out and getting these DNPs, especially watching Larry (Sanders) and how he's progressing and scoring in the offense ... really help me see what I need to do to be successful."

Henson's invocation of Sanders as a model of success is interesting. Like Henson, Sanders was used sparingly as a rookie, yet he had a handful of performances that, in hindsight, foreshadowed his evolution into a starting center. Like Henson, Sanders entered the league soaking behind the ears, armed with an NBA-caliber flyswatter. Their builds are also very similar, although Larry is 15 pounds heavier (if you can believe that), and neither is known for drawing contact and subsequent free throw opportunities.

Unlike Sanders (in a good way), Henson's offensive game is already miles ahead of where Sanders was as an NBA hatchling. Actually, it looks more polished than Sanders' current array of offensive skills (essentially "dunk everything and hit an occasional jumper"). See if you can match up the shot charts below with the player: 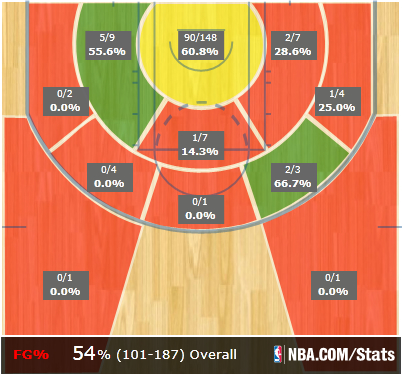 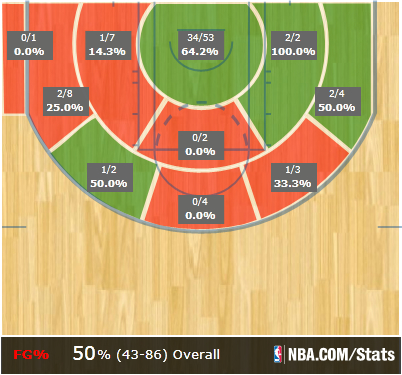 Player A is Sanders and Player B is Henson, who scores in the paint at a higher rate and boasts a more consistent jumper. Just based on Wednesday night alone, you can draw the conclusion that Henson is more creative with the ball in his hands. However, Sanders was more defensively ready as a rookie, and he was rewarded with a bigger role (12 starts, 14.5 mpg) that also resulted from a few injuries, as per Bucks tradition.

Henson certainly has potential as a defensive-minded big (that was part of his allure during pre-draft workouts). But until Henson reaches a point where Skiles is comfortable trusting him to consistently cauterize the defensive bleeding, it's likely to be another few weeks before we see another synonym of Henson's performance against the Spurs.