NBA trade rumors are starting to pop up in 2013, and Milwaukee Bucks veterans Monta Ellis and Samuel Dalembert are being linked to potential deals around the league.

The Milwaukee Bucks are stuck oscillating between different types of mediocre, they control a lot of moveable pieces and role playing veterans, and other contenders around the league will soon be shopping for an extra player or two to improve their chances of winning a title in 2012-13. These factors mean the Bucks are an easy team to implicate in NBA trade rumors.

Samuel Dalembert, Beno Udrih and Mike Dunleavy are all complimentary veteran players on expiring deals, while Brandon Jennings is headed to restricted free agency this summer and Monta Ellis holds an $11M player option for 2013-14. The Bucks certainly aren't married to their current mix of players, and things could change dramatically during the off-season if head coach Scott Skiles and general manager John Hammond aren't re-signed when their contracts expire.

Dan has already discussed the Brooklyn Nets' rumored interest in Ersan Ilyasova, and if that particular rumor still has any legs it won't emerge again until Ersan can officially be dealt (Jan. 15). Frank has already explained why Monta Ellis would be the more likely player to depart in the backcourt, so we should be clear on that front. From my perspective the Bucks are in a rebuilding mode (if they intend to become a contender), and it makes more sense to invest in a 23-year-old Jennings than a 27-year-old Ellis who may start to decline on the back end of his next contract -- he relies on athleticism, and his outside shot is sub-par, so it's hard to see he can be truly effective at age 30 or beyond.

In any case, let's get to the rumors. Monta Ellis and Samuel Dalembert are starting to pop up in hypothetical deals, but none of the current possibilities excite me. Here is a look at the Bucks' cap situation: 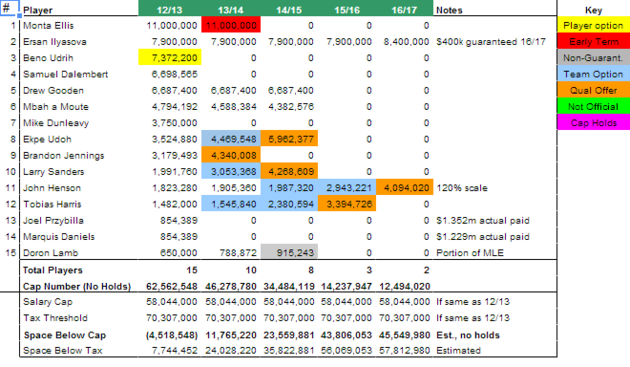 The Bucks have plenty of flexibility after this season, but let's remember that Brandon Jennings will probably cost somewhere between $6-9 million annually, and Larry Sanders would run the Bucks $10+ million per season in a new deal if he keeps up his current production (as explained by Frank).

Zach Lowe of Grantland says the Memphis Grizzlies have "made it known in preliminary talks with other teams that Rudy Gay could be available via trade," so he explored some possibilities in his most recent column. Why are the Grizzlies looking to deal Gay? The simple answer is that they can't afford to keep Gay, Gasol and Mike Conley together in the long term. SB Nation's Straight Outta Vancouver explained the situation aptly several weeks ago:

To put it simply, something has to give. That's $58 million tied up in four players, and that's not including Tony Wroten's rookie deal, team options on Josh Selby andQuincy Pondexter, Marreese Speights' player option, or Hamed Haddadi's $1.3 million. The Grizzlies are a small market team with a new ownership group. Unless they're willing to go far into the luxury tax to keep the entire core together, somebody's going to have to go eventually.

As for the trade possibility, Lowe lists the Bucks under the "Sensible Candidates"category with the following deal: Rudy Gay for Monta Ellis + Doron Lamb. We've assumed that Monta would opt out of his deal if the Bucks kept him until the end of the season -- he's got a window to get more guaranteed money in a long-term deal and he hasn't been overly happy in Milwaukee, so I think it makes sense -- so the deal would shift more long-term money onto the Bucks' books for a different B-level pseudo star. I'm not too impressed with the package.

Gay is a very solid player, and he may even make an all-star team in the Eastern Conference, but he's overpaid. There's a reason the Grizzlies would rather part with him than Gasol, Conley or even Randolph...they can spend that money in better ways. Gay is owed roughly $37 million over the next two years, and the final year of his deal is a $19 million player option that he would be unlikely to opt out from, because it's $19 million for one year for a guy who has never been to an all-star game and has never made an all-NBA team. It wouldn't be a Michael Redd deal for the final two years, but it wouldn't be different enough to make me that excited about it. I'd take my chances with a better deal coming along.

The Bucks would be essentially be tied down to another two years on the same path they've been travelling for the past five: get a B-level guy, surround him with C- or D- level guys and hope something good happens on the way towards the playoffs in a weak Eastern Conference. I don't like the current plan, so I'm more inclined to keep Ellis and hope that he opts out. Whether it's Hammond or someone else in control for 2013-14, the extra cap space and flexibility would be a great thing to have, because it might even encourage a true rebuilding approach.

Here's what Lowe thinks of his proposed deal:

If you can't get an "A" star with the kind of cap room Milwaukee might have this summer, why not take a shot at an overpaid "B" star in the hope he develops into an "A-" guy on your dime? Milwaukee's cap room for this summer depends on Ellis declining his own player option anyway, and the Bucks could make up the difference between Ellis's deal and Gay's by using the amnesty provision (remember that?) on Drew Gooden.

The Bucks have never liked the idea of paying Gooden (or anyone else) to go away, and my hunch is that they're not likely to get involved with Memphis here. But there might be a workable deal, especially if Gay wants out of the ultra-competitive Western Conference.

LeBron James and the Miami Heat have struggled to rebound and defend the interior this season, and their fanbase has taken note of Samuel Dalembert's spot on the bench with the Bucks. The Heat defense hasn't been up-to-par (they are No. 16 in defensive efficiency) and they rank in the bottom-half of the association in all advanced rebounding-rate categories, so Dalembert would be a good fit.

Even LeBron has admitted that they may not have the right mix of players to compete on the boards right now (via the Sun Sentinel):

"We don't have a dominant rebounder," forward LeBron James said. "Collectively, we've got to try to help rebound with one another. Right now, we don't have the size, the athleticism to go up there and dominate a rebounding game. We're trying to collectively do it together, try not to give them second-chance points. We're getting killed in that, too."

"Rebounding is not something you work on, it's a knack," James said. "You go up and get rebounds however you do it. You block out, get a rebound. You see it in the air and you kind of read it off the rim. It's not like grade school, where five guys would box out and let the ball hit the ground once and then go get it. It's a knack. Some guys have it, some guys don't. As a collective group, we don't have it right now."

I think LeBron worked his way into a tricky spot with that quote, because if rebounding is "knack" that comes naturally and that it can't be worked on, then Miami needs to add someone to solve the problem.

Dalembert has that knack, but he's been buried on the Bucks' bench for the better part of the past two months. Heat fans have recently started asking Sun Sentinel reporter Ira Winderman about a potential trade. Winderman isn't exactly impressed with the option, and it's because the Bucks and Heat match up poorly when it comes to assets. Who would the Bucks want to take back for the veteran center? Here's a look at the Heat roster, via Basketball Reference:

The only (reasonable) option that interests me is Norris Cole (he can play some defense, for what I've read) -- although James Jones can hit some threes -- but someone like Joel Anthony or Udonis Haslem would have to go the Bucks to match salaries, and I'm not interested in adding any long-term money when Dalembert's deal could just expire at the end of the season. It would be a nice gesture to a vet like Dalembert to deal him to a team that would use him, but any move would leave Joel Przybilla next in line at center if injuries knocked Larry Sanders or Ekpe Udoh out of the lineup.

Are you interested in either deal? Pass along your thoughts in the comments.