Small ball and the Bucks: What do we call Larry Sanders?

Does playing Larry Sanders at center qualify as small ball? Or are the Bucks simply playing the guys who do their jobs best?

Share All sharing options for: Small ball and the Bucks: What do we call Larry Sanders?

The NBA is changing. What was once a league dominated by giants prowling the paint, dropping in hook shots and stuffing puny challengers, is now a perimeter-oriented one where guards slash into the lane for acrobatic layups and kickout passes. The statistical revolution changed how we view the game; the positional revolution is changing how it's played.

The success of teams utilizing small ball tactics--notably the Heat, Thunder, and Knicks--makes it a strategy likely to be copied extensively. The Golden State Warriors often use a 3-guard lineup of Jarrett Jack, Stephen Curry, and Klay Thompson that can shoot the lights out. The Boston Celtics have had success using Kevin Garnett at center as a defensive anchor.

The Bucks certainly don't want to be left behind, and despite boasting considerable depth at the center and forward positions, their most-used lineup this season features 3 guards (Jennings, Ellis, Daniels), an undersized power forward (Mbah a Moute), and the man in question: Larry Sanders. Often identified with the catch-all PF/C designation, Sanders has settled into a role as Milwaukee's starting center, becoming one of the most effective defensive players in the NBA in the process. Sanders was likely drafted as an athletic counterpart for center Andrew Bogut, who at the time was coming into his own as an elite defensive pivot. All Larry really needed to do was block shots on the weakside to have value.

But every year he's played in the pros Sanders has spent the majority of his minutes manning the 5-spot, according to 82games.com, despite some data suggesting he's more effective at the 4. This season, Sanders' PER as a PF is 19.7, compared to 18.6 at center. Even more pronounced is his counterpart production: 11.7 opponent-PER at PF vs. 18.2 at C. So are the Bucks playing Sanders out of position? Does the easily-ascribed "long, athletic forward" description fit better than "undersized center"?

In the context of the small ball craze, that can be a difficult question to answer. The Bucks' use of small ball lineups hasn't been entirely voluntary. A lack of shooting from the starting lineup early in the season necessitated the insertion of Marquis Daniels at small forward, which worked mainly thanks to Daniels' early hot streak behind the arc. Luc Mbah a Moute is most valuable defending the wings, but he's spent much of his time in Milwaukee at power forward. While Luc's new aggressive offensive style does put a little more pressure on defenses when he plays the 4, very little of Milwaukee's lineup tinkering has felt like matchup exploiting. Instead, Scott Skiles has been forced to alter lineups and rotations to accommodate unpredictable cold-and-hot-streaks and the various limitations of Milwaukee's role players. In fact, that three-guard set fell apart when Daniels regressed as a shooter, leading us to suggest another shakeup was in order. The Bucks have since mercifully obliged.

Outside maybe a handful of games, that now-defunct lineup strategy never achieved the kind of success that has made it a staple in Miami and New York. The Bucks weren't trying to maximize the talents of MVPs or All-Stars. They simply lacked alternatives. But does that mean Larry Sanders has been pigeonholed into the center spot by default? Or has he always been a center in every way but weight? Is calling Larry Sanders a small ball center just a fancy way of saying he's not fat?

I think so. Because truth be told, it really feels like Sanders was always destined to be a center. Consider his shot distribution, displaying here alongside an averaged distribution for centers and power forwards (limited to players with 25+ MPG). 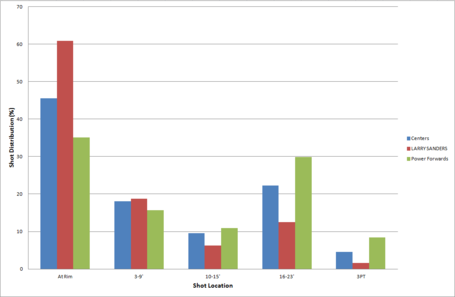 Sanders' current effective field goal percentage is a healthy 54%. If his shot distribution was shifted to match an average PF at his current conversion rates, his eFG% would fall below 41%. With modern power forwards increasingly relied upon to stretch the floor, Sanders' lack of outside jumper is a legitimate concern when he lines up alongside another traditional big. Many teams would love to see their centers shoot almost exclusively at the rim; Sanders' newfound attachment to the immediate basket area has been key to his improvement.

Defensively, the chief concern with playing Sanders at center has always been his lack of bulk. Could he keep heavier post players off the block and the boards? But credit Larry for working on that perceived weakness: he came into this season visibly stronger and has shown a far better understanding of how to use his length, especially for rebounding. Even if Larry can't hold his ground indefinitely against the bigger front lines in the NBA, he's gotten better at making them shoot over him rather than through him.

If there's one thing modern basketball analysis has taught us, it's that measurables should carry less weight than on-court data. The data says Larry Sanders is better as a center. He is good at doing things centers do. When he plays center, the Bucks are a better basketball team. He is a center.

Now the question is just whether he's Milwaukee's center of the future.