The Milwaukee Bucks will need to rely on their stable of spot-up sharpshooters to stay afloat as an offensive unit during the 2013-14 NBA season.

By now, it should be clear to see that the Milwaukee Bucks lack the talent to be an elite offensive team this season. However, that doesn't mean they're hopeless. The purpose of the Building the Bucks Offense series has been to explore the potential strengths and weaknesses of the roster, and ultimately develop ideas about how the team can maximize the value of its modest scoring talent on the floor. In case you've missed any of the previous posts, here's a quick recap of the main points we've hit so far:

In this post, I'll wrap up the analysis of half-court offense with a close look at the strength of the unit: spot-up shooting. All seven of the veteran perimeter players on the Bucks roster are established sharpshooters from the perimeter, so if the offense has any chance to be good, it'll be by feeding these players when their feet are set behind the arc. In other words, when transition stalls and the Bucks are forced to run isolation and pick-and-roll plays, they should always be focused on setting up their shooters first.

Carlos Delfino (1.10 ppp), Ersan Ilyasova (1.09), O.J. Mayo (1.05), Caron Butler (1.04), Luke Ridnour (1.04), Gary Neal (1.03) and Brandon Knight (1.02) have all been above-average spot-up shooters over the last two seasons. In fact, each member of that septet surpassed the 2012-13 league average (0.98 ppp) in both of the last two campaigns. In other words, it's safe to say that the Bucks are loaded with sharpshooters. If they play to their lone strength, you can expect the Bucks to take a lot of three-point shots this year. It will lead to a feast-or-famine offense, but it's honestly Milwaukee's best chance to become a solid offensive team.

Here's a look at the spot-up efficiency chart, which should be in a familiar format if you've been following along with this series: 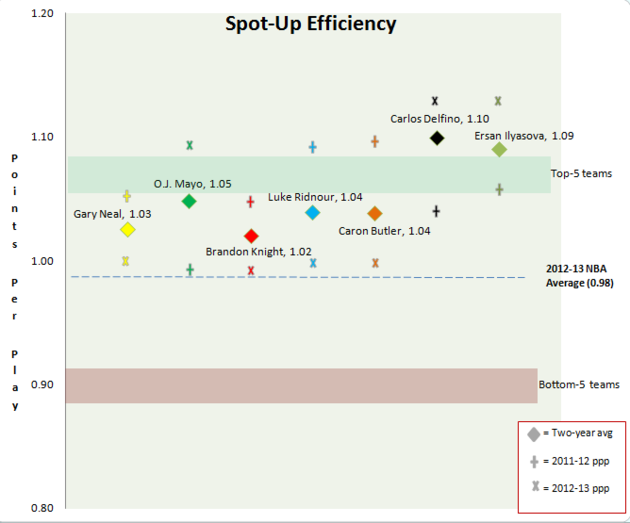 There's a whole lot of really good shooting shown up there, and hey, Brandon Knight even managed to make his way into a happy conversation (though it probably hints at his future transition to the shooting guard position). With so many great options to spread the floor, Milwaukee must be banking on stretching defenses thin along the perimeter to make up for a lack of true creators on offense.

It's not a terrible plan, either. If you ever wonder how the New York Knicks posted the third-best offensive efficiency last year with Raymond Felton, Jason Kidd and Pablo Prigioni running the show, the answer is three-point shooting. The Knicks led the league by chucking up threes on 35.4 percent of their total shot attempts, so it didn't matter much that they finished 16th in converting those shots. The inherent efficiency of long-range shooting is worth exploiting, and anything less than a three-point attempt rate (3PAr) of 30 percent for the Bucks this year would be supremely disappointing to me. To put it another way: If the Bucks want to be a potent offense, at least three out of every 10 shots they take must be from beyond the arc. It's just that simple.

If you'd like to know where the top options on the Bucks like to shoot from, I've done some digging at NBA.com/stats and created a hot spot map that shows the top-four shot locations on the floor for each veteran player over the last two seasons combined. Player names mark those locations, and the corresponding number states how they stack up in relation to the 2012-13 NBA average for that spot on the floor. 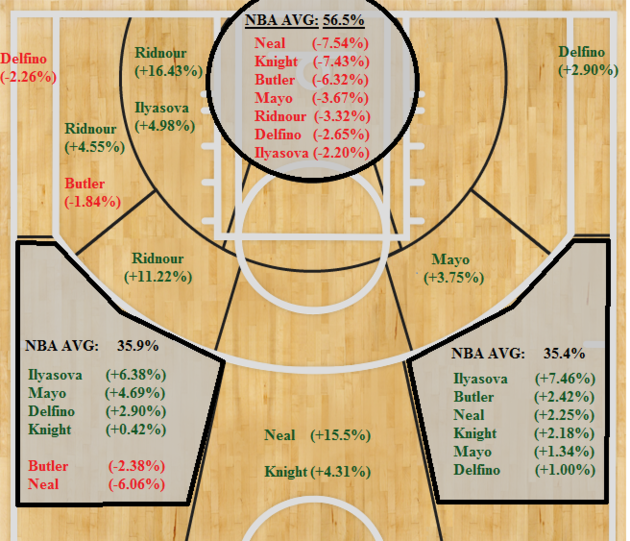 The top location for all seven players was at the rim (this is fairly standard), but as you can see, none of them are particularly effective once they get there. When the top seven offensive options all rate out as below-average finishers, you know it's time to load up with shooters along the arc. I repeat: If the Bucks want to be a potent offense, at least three out of every 10 shots they take must be from beyond the arc.

The good news is that six members of the spot-up septet are comfortable shooting often from each wing, and for 10 of the 12 permutations the Bucks wind up with an above-average look from an efficient spot on the floor. Remember that 35.9 percent shooting from the left wing translates to a 53.9 effective field goal percentage, thanks to the extra point for a made three. The NBA average eFG% last season was 49.6 percent, in case you were wondering.

Delfino is comfortable with (and familiar with) being stashed in the corners, and he's effective enough to make defenses pay. Ilyasova has never shifted to the corner to develop that shot, but Caron Butler and Luke Ridnour have both provided value from that zone on the floor in the past.

Looking toward the middle of the floor, some pick-and-roll options emerge. Ridnour is so deadly moving to his left into the short corner, that any PnR look where he starts on in the middle or the right wing and pushes the ball to the left elbow and beyond for his own shot, or a reversal to the right wing for a spot-up shot, seems like a good opportunity.

Furthermore, Ilyasova should be able to run effective pick-and-pops with Gary Neal, Brandon Knight, and possibly O.J. Mayo. If the opposing big man hedges out on the ball handler, Ersan can float to either wing and get to a zone where he's far better than the average shoorter. If the opposing guard goes under Ersan's screen and the big man sinks low, Neal can punish the defense with a three from the middle of the floor, while Knight and Mayo can also get good looks above the break from multiple zones.

So by now you should get the idea. The Bucks aren't blessed with a ton of scoring talent, but they can make a dent in the defense if they focus on getting the ball to spot-up shooters after their best effort to score in transition has passed. In the end, the lesson is simple: If the Bucks want to be a potent offense, at least three out of every 10 shots they take must be from beyond the arc.