The Milwaukee Bucks will enter the 2013-14 NBA season facing plenty of questions about their offense, but head coach Larry Drew has a particular point of emphasis in his offensive philosophy that should make Bucks fans excited for the upcoming year.

As the Milwaukee Bucks hurdle toward the 2013-14 NBA season, I've been busy contemplating two simple questions that have complex answers: (1) how will the offense be structured this season, and (2) in what ways can Milwaukee expect to succeed when it comes to efficient scoring? We've confronted the uncertainty of the offensive hierarchy, so now it's time to cover the one area that gives me the greatest sense of hope going into this year.

Most of the offseason rhetoric has left me feeling a bit uneasy. The corporate rebranding of the Bucks as a bunch of good guys with the right attitude is a cute storyline, but at this point it's starting to feel like a convenient way to scapegoat Brandon Jennings and Monta Ellis for everything that went wrong last season. In reality, the Bucks had a talent issue more than an attitude issue, and losing tends to bring out the worst in everyone. The only teams that can afford to count on good attitudes are ones with low expectations, because the NBA is ultimately a league that produces 29 losers every year.

Good vibes aren't going to get the Bucks very far. Games are decided on talent, and I'm still not sure the Bucks have enough of it. I'd probably still take the over bet on the LVH Sportsbook over/under of 28.5 wins for Milwaukee, but that number should give you an idea of what serious minds think about the whole "chemistry" angle. But I said I was going to focus on a hopeful thought, so here's how I think Larry Drew and the Bucks can beat that prediction posted above.

When Larry Drew signed on to coach the Bucks, one buzzword started to ring in my mind: transition. Lester Conner, who served as the lead assistant under Drew in Atlanta for the last three seasons, had some encouraging things to say back in June (via JS-Online):

"[Drew's] style is one of being able to push the basketball in transition...We wanted to push the ball up the floor and there was not a lot of isolation stuff...The people in Milwaukee will like his style of play. He will play to his players' strength. When we lost Marvin and lost Joe, we had to play faster, get some three-point shooters out there and spread the floor. His style is not boring."

Conner curiously did not join Drew's staff in Milwaukee and instead wound up with Brian Shaw in Denver, so that quote wasn't quite enough to get me excited. Then Brew Hoop alumnus and Bucks.com writer Alex Boeder asked Drew to describe his philosophy, and the first words of out Larry's mouth were these: "Offensively, up-tempo. Play a lot in transition..." Alex followed up on that portion of his answer (because Alex is awesome), and here's how the exchange unfolded:

Alex: "You mentioned playing up-tempo. The Hawks went from 27th to 22nd to 12th in pace in your three years. So you prefer that more up-tempo style of basketball?"

Drew: "Yeah, I do. I think players enjoy playing that way. I enjoy coaching that way. Up-tempo allows you to attack initially, and if the attack is not there, we can get into our offense. By pushing the basketball, by playing up-tempo, we have more time to get into a half-court set, to explore more options with more time on the shot clock. Players love playing up-tempo. Still, you have to be intelligent, and you have to be smart. You don't want to play up-tempo and just turn into a run-and-gun team. We want to be up-tempo, we want to attack, but we want to be intelligent."

Great stuff, right? Any coach that wants to put pressure on the defense by advancing the ball into the frontcourt before defensive anchors can get set in the paint is good in my book. The additions of Gary Neal, O.J. Mayo, Carlos Delfino and Brandon Knight suggest Milwaukee will be shooting a lot of threes this season, and if those guys can fill transition lanes with Ersan Ilyasova to spread defenders thin along the arc after Larry Sanders blocks and John Henson defensive rebounds, suddenly the Bucks look a bit more dangerous than their roster appears at first glance.

But it always sounds good in theory. What coach doesn't want to force turnovers and misses and covert those possessions into quick points on the other end? Then Frank put us up on Andrew Gruman's training camp piece that hammered home the point that Drew is serious about transition offense. Drew has been emphasizing the number four with his new team, because he wants them to get the ball into the forecourt within four seconds after every opponent miss or make (via Andrew Gruman):

"We don't want to come down and just jack up any kind of shot," Drew said. "We want to be very mindful of what the situation is to make sure we get a good shot every time.

"What it does is it really keeps constant pressure on the opposition. When teams scout us, I want something in that scouting report to say something like 'Guys, we have to get back make or miss because they really push it up our backs.' We have to develop good habits in doing that."

For all of the lingering questions I have about Larry Drew and this offensive unit, at least I know that I fundamentally respect Drew's focus on creating transition opportunities. Here's why.

The Value of Transition Offense

Simply put, transition offense is one of the most efficient ways an NBA team can use a possession. I took some time to wade through team stats from the 2012-13 NBA season at MySynergySports.com, and here's the breakdown of the average efficiency for different play types that should explain why I'm so interested in transition basketball: 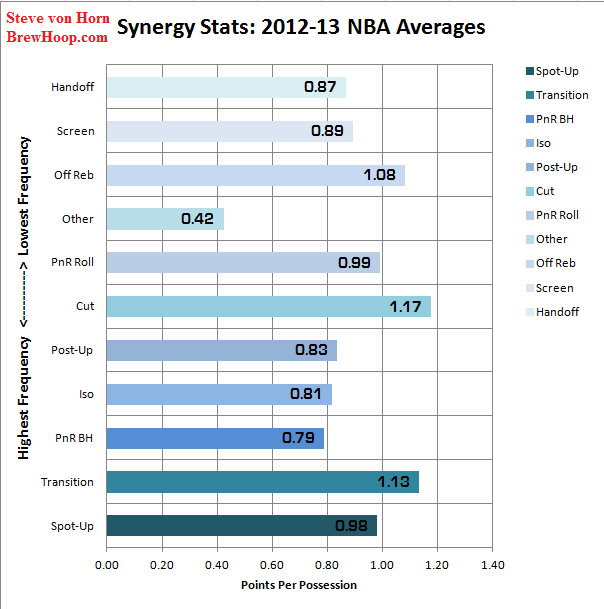 As you can see, the 1.13 ppp mark for transition was, by far, the highest value among the top-five most-frequent play types for the hypothetical average team in 2012-13. If you make it a point to push the ball after every opponent miss and turnover, you can present your team with a better chance to score each time down the floor. After all, if nothing is there, the ballhandler can always shift into other half-court looks like isolation or pick-and-roll opportunities. You can't "call" transitions plays, because they are born out of defensive stops, but you can prepare your team to take advantage of them. I believe Larry Drew is more than just talk when it comes to this area of the game.

The numbers the Hawks posted last season lend credence to Drew's declaration of philosophy. Atlanta ranked third in the NBA in total transition plays, despite playing at just the 13th-fastest pace. And their style of play didn't undermine their defensive system, either. The Hawks also posted the 10th-best defensive efficiency rating, and limited opponents to below-average levels for transition attempts (1204) and efficiency (1.09 ppp). The Bucks don't have Josh Smith and Al Horford, but Larry Sanders and John Henson will create similar opportunities for Milwaukee to run.

Here's a look at the offensive breakdown, to show how the Drew put his philosphy into practice: 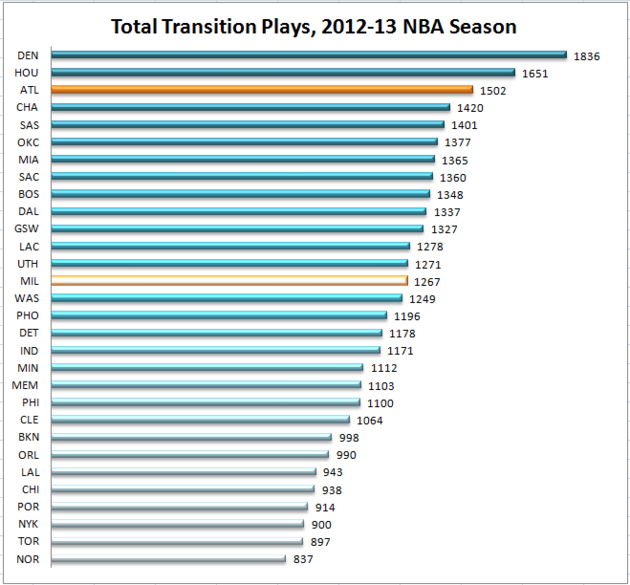 They also didn't run just for the sake of running. Atlanta's top-three finish in transition plays was bolstered by their No. 7 ranking in transition efficiency (1.16 ppp). Here's a look at the efficiency breakdown: 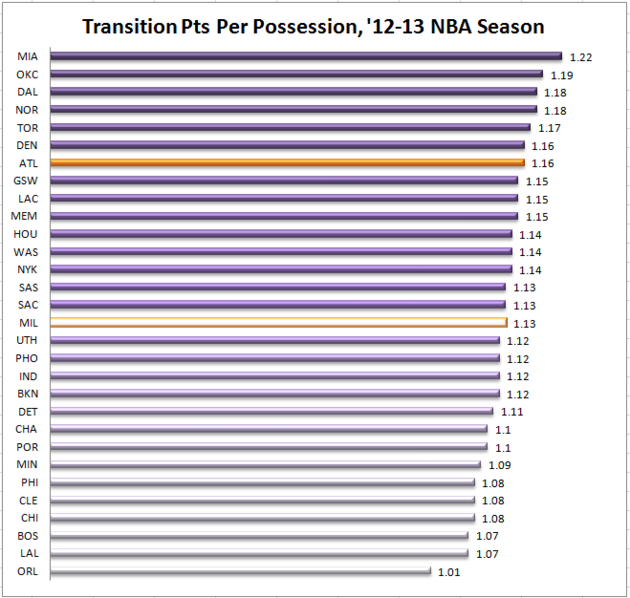 When it comes to transition offense, Larry Drew is more than just talk. When it comes to efficiency, transition plays create better scoring opportunities than nearly every other type of play an NBA team can run. While the Bucks won't be able to run all the time or solve all of their offensive problems with a single brush stroke, I'm genuinely excited about Drew's emphasis on taking advantage of these excellent opportunities whenever they arise. If Larry Sanders stays healthy, the Bucks should have plenty of chances to convert blocks and missed shots into points on the other end of the floor.

Their half court system could get a bit messy based on the talent they have (I'll get into this during later posts for this series), but there's a lot to like about the philosophical approach Larry Drew will bring to the Bucks in 2013-14 and beyond.