Have you been watching the Bucks closely? Take our 10-question quiz and see how well you know the team.

If the Milwaukee Bucks haven't driven you crazy at some point during the first five games of the 2013-14 NBA season, you probably haven't been watching closely enough. Nate Wolters and Zaza Pachulia have been pleasant surprises, but uneven play from Larry Sanders, O.J. Mayo, Gary Neal and the rest of the starters has caused more than a few problems for Larry Drew and his coaching staff. The best way to describe the team right now is to say that they're unconvincing. Whether it's the offense, defense, effort, execution, or approach, there always seems to be something a bit off. Injuries have cut into the depth of the squad, so things may get better when everyone is available again, but for now it's hard to say anything definitive about the Bucks.

How closely have you been watching this year? Take a 10-question quiz to see how much you know about the team. 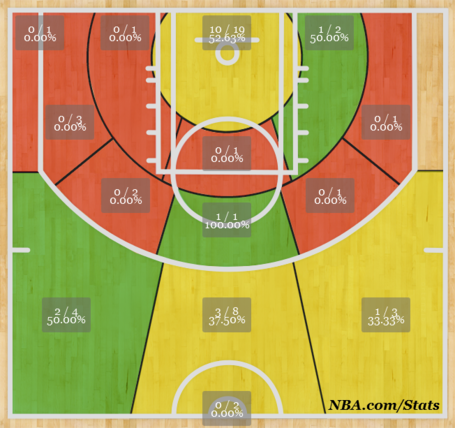 Brandon Jennings. BJ is off to a slow start as a scorer in Detroit, his True Shooting Percentage sits at 46.9% through three games.
(3) List the first five opponents the Bucks have played so far this season.
New York Knicks (L), Boston Celtics (W), Toronto Raptors (L), Cleveland Cavaliers (W), and Dallas Mavericks (L).
(4) *Which of the following statements are true?
None of the statements are true. The Dallas Mavericks are the only Bucks opponent with a record better than .500 (4-3). The Mavericks (+3.5 pts/ 100 poss) and Raptors (+2.9 pts/ 100 poss)currently own positive point differentials. Milwaukee is ranked 29th in the NBA in total rebound percentage, while the Miami Heat are dead last.
(5) *Which of John Henson's 2013-14 rebounding percentage stats (offensive, defensive, and total) are lower than the career rates of Brook Lopez?
Sadly, the answer is all three. Lopez is constantly criticized for his lack of rebounding prowess, and John Henson has a better track record in his career, but this season Henson is rebounding worse (7.5% OREB, 15.4% DREB, 11.5% REB) than Lopez has during his NBA career (9.6% OREB, 16.5% DREB, 13.0% REB) for each category.
(6) *Which Bucks player leads the NBA in field goal percentage (minimum 35 attempts)?
This was not a trick question! John Henson leads the NBA in field goal percentage (among players with at least 35 FGA) at 61.5%. He has converted 24 of his 39 shot attempts this season, and best of all he has only taken three shots outside the paint.
(7) *How many NBA players have a higher assist-to-turnover ratio than Nate Wolters?
Two. Eric Maynor (14.00 AST/TO) and Andre Miller (7.5) are the only two NBA players with a better ratio than Wolters (6.2), but Wolters has played significantly more than either of those guys so far this season. Young Man Buckets is doing work!
(8) *Does Giannis Antetokounmpo have more points or fouls so far this season?
Our favorite rookie has more points than fouls, but it's close. Antetokounmpo has scored eight points and committed six fouls in his 34 minutes of regular season play. When Larry Drew decides to break the streak of DNP-CDs (currently at two), Giannis will hopefully widen the gap between points and fouls.

(9) *Which Bucks player leads the team in minutes played?

**Statistical support for this article was provided by NBA.com/stats and Basketball-Reference.com