NBA Power Rankings: Bucks Are Bad At Everything

Share All sharing options for: NBA Power Rankings: Bucks Are Bad At Everything

You don't own the worst record in this sorry excuse for a professional basketball conference by accident. When it comes to this Eastern Conference, you have to earn it, and through 12 games the Milwaukee Bucks have indeed hoarded enough demerits to cushion the Brooklyn Nets' free-fall into the cellar. As of Nov. 24, three teams in the East have a plus-.500 record, so it's pretty impressive that the Bucks have managed to avoid accomplishing anything in their annual race for a playoff berth.
Injuries have punched more holes in the boat than Larry Drew could be expected to plug, and Larry Sanders missing time because he decided to christen something other than the ship he was supposed to captain doesn't help, but the issues with this team run much deeper than the injury report. Pick an advanced stat, any advanced stat, and it's easy to see that Milwaukee struggles in nearly every facet of the game.
I tried to warn you about the offense before the season, but things are doubly bad because Larry Drew doesn't seem to know what gives his guys the best chance to win. The offense scores a putrid 92.3 pts / 100 poss and is ranked 29th in the NBA despite posting the 10th-best three-point percentage in the league (38.6%). The shooters are doing their job by connecting on 42.5% of their spot-up opportunities from beyond the arc, but they simply aren't being put in a position to succeed often enough.
I accept that Drew wants to win games (he should, he's an NBA coach), so I begged before the season for 30 percent of the team's total shot attempts (3PAr) to come from three-point range. So how are things going? Despite playing from behind in nearly every contest, only 24.1 percent of total shots are threes for the Bucks. That's the 22nd (or eighth-lowest) mark in the league. The Bucks also rank 20th for shot attempts per game in the restricted area and 10th for shot attempts from mid-range, so it's not like they're eschewing threes for great opportunities down low, either. Let's just say my confidence in the head coach isn't exactly high at the moment.
Drew made it a point to apologize for his team's effort on Saturday night against the Bobcats, but the Bucks have been struggling to muster up a professional effort on the glass all season. Teams like the Miami Heat love to play small and routinely post bad rebounding numbers, but the Bucks are stocked with size and still can't get the job done. Zaza Pachulia, John Henson, Ersan Ilyasova, Ekpe Udoh, et al. have conspired to make Milwaukee the worst defensive rebounding team in the association, and it's not even close.
An average NBA team grabs 74.3 percent of opponent misses. The Bucks grab just 70.2 percent. It's a crippling weakness for which there is no good excuse, and everyone is to blame. Sure the team has pulled down a horrid 66.4 percent of those misses when Udoh has been on the floor (165 minutes), but things have somehow been even worse when Giannis Antetokounmpo was out there (65.6% team DREB in 114 min) AND when Ersan Ilyasova was on the floor (66.1 team DREB in 149 minutes). The worst part is that there is no on/off split to suggest there's a magic bullet in the chamber. On the whole, not a single player on the roster has elevated the Bucks to an above-average defensive rebounding rate when on the floor this season (Pachulia comes closest at 74.1% team DREB).
All those second chances contribute to the Bucks' poor defensive showing, but its ripple effect can be seen on the offensive end as well. Despite all the talk during camp about pushing the tempo and being a running team, the Bucks rank 28th in fast break scoring (9.5 ppg), 20th in fast break defense (13.8 ppg) and 25th in pace overall. Though they've been a top-ten team in forcing turnovers, their inability to rebound and shortage of ball-handlers has no doubt been a major factor in their struggles getting easy baskets. All of which is doubly problematic for a Bucks team that lacks the individual scoring talent to create good looks in the half-court.
For a more comprehensive accounting of the carnage, take a look at the stats* below: 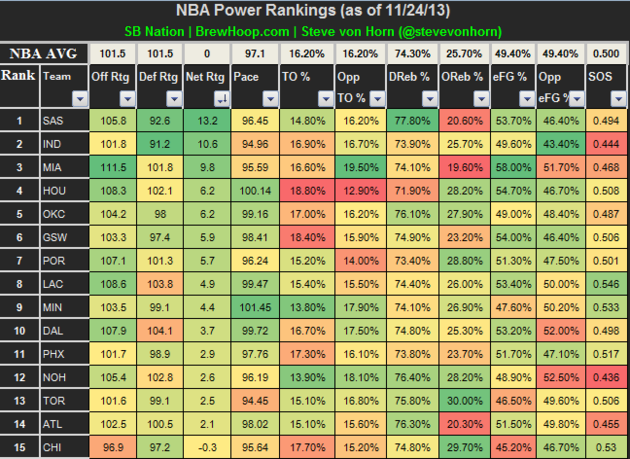 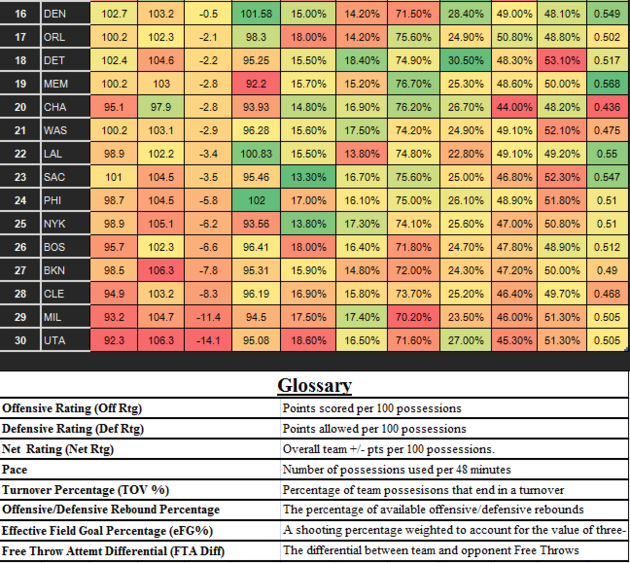 *Statistical support for this story was provided by NBA.com/stats.