Help reunite this dog with his dad while simultaneously embarrassing a professional athlete!

We've all been embarrassed by our moms one or twice (read: hundreds of times) before. No matter how hard we try to avoid it, even if you're a million dollar athlete like Bucks point guard Brandon Knight, a mom will take time from being loving and kind to gut you when she wants to. Such is the case with Brandon Knight and.....Charlie?

Ah, yes. Brandon Knight's mother Turgenia has created a Facebook page for the dog (Charlie Bucksfan Knight) that is apparently Brandon's, but has been left at home with the family in Florida. Among activities like hanging out with his uncle Jaxson or asking for doggles (swimming goggles for dogs), Charlie's main focus is to get the attention of his dad, Brandon. This is generally used by the use of the hashtag  "#wheresmydaddy".

The goal of the page is twofold. The first is to have as many Bucks fans and basketball fans join together and like the page in an effort to see if Charlie can find his daddy. The second, and most important, is to serve as a joke and embarrass the hell out of Brandon, in a way only a mother can accomplish. I imagine the latter will be plenty successful.

Just for kicks, here is Brandon with Uncle Jaxson as a pup, again via CBF Knight. 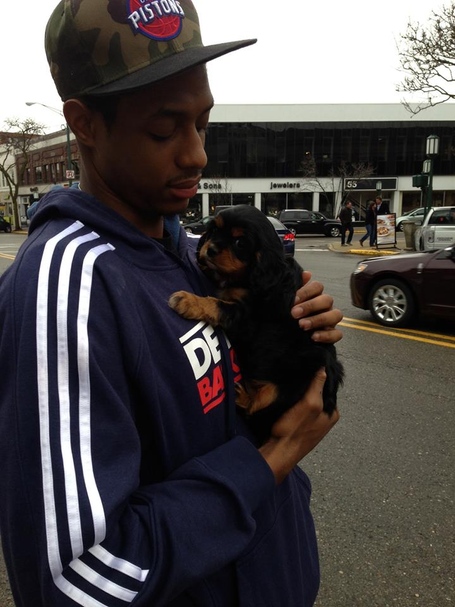