The Bucks haven't shown an ability to beat anyone of late, but a long time ago in a city 1,000 miles away they did actually beat the Celtics. TONIGHT THEY TRY DO IT AGAIN!

And the streak continues. The Bucks' 92-76 loss in Charlotte last night was their 11th in a row, and at this point it's really not clear to me what the Bucks are even trying to do to get better--aside from hoping Larry Sanders comes back as Bill Russell of course. They talked all preseason about wanting to run, but they don't run. They talked all preseason about starting things with their defense, but without Sanders they don't rebound and have shown a Krystkowiakian reliance on zone defenses, which is NBA code for "we ran out of ideas."

I'm not saying Larry Drew and company don't have some excuses for the losses, or that all of this may not be for the best in the long term. But the Bucks aren't even losing on their own terms. The Celtics and Bobcats aren't great, but they play defense. The Sixers will struggle this season, but they're young and play fast and that makes them pretty fun. The Bucks? I really don't know what they're about right now. They're not über-talented, but they're not worst-team-in-the-league untalented either. So they're just sort of thrashing around, trying different lineups, not showing real improvement, losing to lots of mediocre teams, and talking every game about needing more consistent effort.

So on to tonight. The Bucks may or may not be without Ersan Ilyasova (left last night's game with a hamstring injury) and Caron Butler (late scratch with a swollen knee), so take the starting five listed above with a grain of salt. Hell, if Ersan is out you may actually see John Henson start. If Butler's out then we'll probably see more of Giannis Antetokounmpo, which at this point is the only thing Bucks fans seem to hope for on a nightly basis.

On that topic, one promising thing about the rookie has been his shot chart: 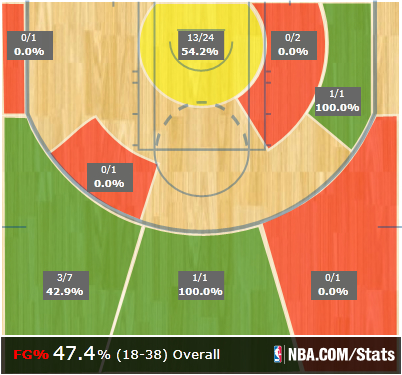 It'd be nice if all those zones were green, but the good news is that even at 18 he seems to know where his shots should be coming from: at the bucket, or beyond the three-point line.

Celtics update. The Celtics have won three of their last four, their latest a 17-point blasting of the Cavs last night in Boston. They similarly have a fan base more focused on next summer's draft than next spring's playoffs, though they also have a front office that seems far less committed to the latter than the former. The irony then is that the Rondo-less Celtics are playing much better than the Sanders-less Bucks, though you can probably give much of that credit to rookie head coach Brad Stevens. Still, one of the Bucks' two wins this season came at Boston's expense, as Zaza Pachulia and the Bucks' youngsters led a spirited comeback to spoil Boston's home opener.

As for last night's win over Cleveland: the over-relied-upon Jeff Green blew up for 31 points on 19 shots, the offensively challenged Avery Bradley added 21 and Jordan Friggin' Crawford had a triple-double. Boston's defense has been solid to date (10th) and they're making due with Jordan Friggin' Crawford playing point guard (5.2 apg), Jared Sullinger starting at center and shooting threes (6/8 his last three games), and they have six guys with PERs above league average and WS/48 above .100 (Henson is the only Buck fitting either category). Injury-wise, Rondo remains out while Courtney Lee and Kelly Olynyk didn't travel with the team to Milwaukee.