The Milwaukee Bucks won an unflattering game against the equally injured Chicago Bulls Tuesday night, 78-74, and it was lengthy big man John Henson that gets all the props.

Share All sharing options for: Bucks 78, Bulls 74: John Henson Does The Damn Thing

Forget about the Chicago Bulls missing Luol Deng, Joakim Noah, and Jimmy Butler. Forget Chicago's poor defensive rotations and a scoring ability that would make the 2010-11 Bucks proud. Let's concentrate on why, in just his second year, John Henson is going to gradually cause a ruckus in the Bucks' frontcourt rotation.

Henson shot 8-11 around the rim, 10-13 overall within 9 feet, and scored the first basket of the game on an emphatic dunk. He held his own against the physical Bulls frontcourt duo of Taj Gibson and Carlos Boozer (who's actually pretty soft), and looked pretty good rotating to help whenever a Bulls wing cut to the cup.

Overall, it was a lot of what we've seen from Henson in the past, against a thinner roster than the Bucks', but we're at the point in Milwaukee's season where individual performances are far more compelling than their collective product. And needless to say, Henson turned in a beauty that should have a recently vocal swath of Bucks fans reviewing scouting reports and fantasizing how he might fit with a certain collection of college players.

Over his last five games, Henson has averaged 17 points on 56% shooting, 10.4 rebounds, 2.6 assists and 2.4 blocks. He's converting on an excellent 64.6% clip at the rim, and as you can see below, is starting to notice he should probably stick to that area of the floor: 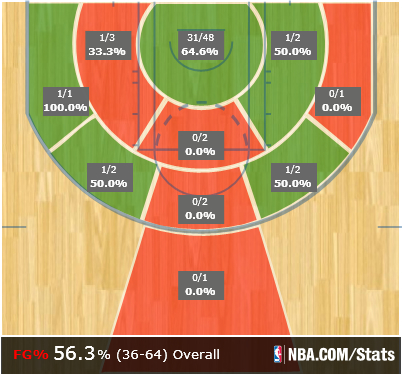 Other than Brandon Knight, whose line has a flavor of Jennings to it (19 pts, 8-23 FG, 10 rbs, 2 asts) but featured a healthy dose of transition attacks, none of the young Bucks did much of note.

This is unquestionably the worst season (record-wise) of GM John Hammond's tenure in Milwaukee. The team is also more flush with young, developing talent than it has been over the past five years. Those competing realities create a game-to-game dichotomy of frustration and fascination.

Khris Middleton is now shooting 48% on threes, and 57% in the corner on the season. Giannis continues to receive regular broadcast comments about his freakish length, although he was very quiet Tuesday, and Jim Paschke is improving his pronunciation of Antetokounmpo.

Overall, this sub-80 point win against the Bulls does little to move the needle of our expectations for the Bucks. But it does engender hope that, the more young talent shines and creates buzz, the faster veterans will be stowed away at the end of the bench or dangled for trade bait.