The short-handed Bucks handled the Sixers at home on Saturday night. Khris Middleton and Brandon Knight both played well, and the offense looked good for a night.

With the tanktastic Philadelphia 76ers in town, the thought of the Bucks stacking up another loss in front of the home crowd probably didn't bother anyone. Well, tank shmank. The Bucks ended their five-game losing streak at home and their five-game skid overall thanks to quality production from Khris Middleton and Brandon Knight and crisp offensive execution...no, really.

John Henson was a late scratch due to the knee contusion he suffered in the OT loss to the Cavaliers, but Caron Butler stepped into the starting lineup and alongside Knight, Middleton, Giannis Antetokounmpo and Ekpe Udoh helped Milwaukee build an early lead that swelled to double-digits by halftime. And in a surprise development, the Bucks played well enough on offense to hold the lead for the final 41 minutes of the contest.

How'd they do it? Well, 52.4 percent shooting from the field (43-82) helped the league's least-efficient offense look better than it is, and 71.4 percent accuracy on two-point shots outside the paint put extra pressure on Philly's questionable defense, but the Bucks did their part and avoided taking long twos. Whether the Sixers covered the sets worse than other teams or just plain sucked at rotating is up for debate. Even so, the shot chart (via NBA.com/stats) sure looks pretty good: 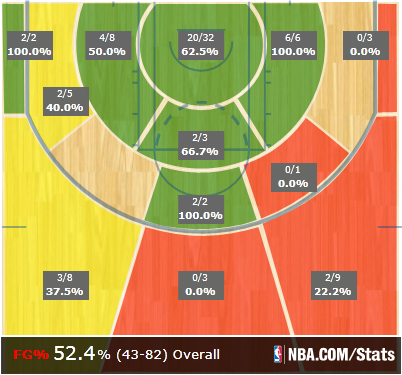 Butler hoisted up a lot of shots in the flow of the offense, and despite a so-so shooting night (8-21 FGs) he came away with a sneaky good double-double (21 points, 11 rebounds). Meanwhile, Khris Middleton got his groove back and scored a team-high 27 points on just 15 shots, including 10 points in a three-minute span of the third after Philly had drawn to within 63-61. Brandon Knight continued his weird journey as he avoided committing a turnover for the second-consecutive game (!) and poured in 21 points on 13 shots. Overall, the Bucks did a good job executing their offense while protecting the ball -- something that has otherwise been a problem for most of the year.

With Henson out, Ilyasova still ailing, Larry Sanders not in the building and Pachulia on the shelf, the Bucks only had two big bodies to throw at the Sixers on Saturday, and that lack of depth showed. Ekpe Udoh (7 rebs and 5 blocks) and Miroslav Raduljica (14 pts, 5/7 fg, 4 rebs) did their best on both ends, but the Bucks played small the entire night and that left Spencer Hawes (25 points, 11 rebounds) and Thaddeus Young (30 points, 10 rebounds) to post some silly stats as Philly won the paint scoring battle, 52-42.

Giannis finished with a solid stat line (12 points on 3-7 shooting, three assists, two blocks), but it didn't feel like he made a big impact on the outcome of the game even if he was on the court for 35 minutes). But as usual he made some sneaky cuts, as he...

Slashed to the rim and flushed a creative pass from Brandon Knight:

And slammed home an alley-oop from O.J. Mayo:

Philadelphia's wunderkind Michael Carter-Williams had a few moments of his own during another quality performance (19 points, 12 assists), highlighted by this dunk past Giannis in transition:

Looks like @bango is getting help from the ref.@Bucks pic.twitter.com/e0OP43UViv