Once again we're tracking 2014 NBA Draft prospect rankings on ESPN and Draft Express. And while the names Wiggins and Parker may still reside atop most experts' big boards, Joel Embiid and Zach LaVine are doing their best to change that.

The Milwaukee Bucks' horrible start to the 2013-14 NBA season has left the team staring up at every other franchise in the standings, but there's some serious upside to the situation. The projected 2014 NBA Draft class is considered exceptionally top heavy. Andrew Wiggins, Joel Embiid, Jabari Parker, Dante Exum, Julius Randle, Marcus Smart and Aaron Gordon may all have the potential to become star players, so that's the reason why I tweet this message out after every loss:

The opportunity presented to the Bucks this year has inspired me to start the annual draft coverage early. Each of the last two seasons I have tracked the big board prospect rankings from Chad Ford of ESPN and Jonathan Givony and company at Draft Express. My goal is to get a better of idea of the fluctuations in stock for top prospects, and then investigate why the changes occur.

This approach has revealed some interesting information. In 2012, the descent of Perry Jones III and Jeremy Lamb, the rise of Damian Lillard, and the utter failure of the Dion Waiters pick were clear to see. In 2013, the meteoric rise of Giannis Antetokounmpo and the confusion at the top of the draft board became two of the bigger stories. Here's an early look at prospect trends in the upcoming draft (note: you can see the full draft boards at the bottom of the post).

If you've watched the Kansas Jayhawks this year, the rapid ascension of Joel Embiid on the ESPN Big Board shouldn't surprise you at all. Your heart may tell you to focus on Andrew Wiggins ("this guy is supposed to be the next superstar, so I'm going to fixate on him!"), but your brain forces you to gravitate to Embiid ("oh my goodness who is that massive man fundamentally changing the the way the opponent plays the game?").

Jason King has written a terrific piece on Embiid's journey from Yaoundé, Cameroon to the crest of NBA draft boards, so I will direct you there for the complete story. Here are the highlights: Embiid started playing organized basketball at age 16, and since coming to the U.S. he has soaked up a ton of good information and dazzled scouts with his size, quickness, length and natural feel for the game.

To borrow a line from King, Embiid boasts " the wingspan of a pterodactyl and the footwork of a ballet dancer." What's not to like? An interesting sidenote to the story is that former Bucks forward and fellow Yaoundé native Luc Mbah a Moute helped discover the intriguing big man in July of 2011. Don't be surprised if Embiid gets selected somewhere in the first three picks of the 2014 NBA Draft. Don't be surprised if I start begging for the Bucks to take him, either.

Julius Randle has slipped from his No. 2 position on the ESPN board to make room for Embiid, though it's not like Randle has done anything wrong. He's scored in double digits in all 12 games and notched a double-double in nine of those contests, so there's still a lot to like. He's quick on the floor and confident and strong in the post, but he looks completely lost on defense (he stares down his man and doesn't help well) and he plays below the rim. According to Ford, scouts are waiting for John Calapari to use Randle more on the perimeter to take advantage of his quickness and mismatch potential. As teams continue to use zones to systematically deny Randle low post touches, it will be interesting to see if he gets to attack more from the perimeter.

Don't forget about Jabari Parker! The phenom from Chicago has burst on to the scene by scoring 20-plus points in nine of his first 11 games, hitting 47.5 percent of his threes and snatching ACC Player of the Week honors three weeks straight. Parker is a pure scorer with a broad skill set, and if he can continue to provide 22.1 points per game on 64.1% true shooting there's no reason he can't become the No. 1 overall pick.

The biggest riser on the ESPN board is UCLA freshman guard Zach LaVine. He started the season on the Bruins' bench, but he's been electric nearly every time Steve Alford has put him on the floor. LaVine is lightning quick with the ball and explosive when he decides to leap. The form on his jumper already looks good, and he has connected on 61.1 percent of his jumpers and 47.1 percent of his threes so far this season.

These are the reasons why LaVine has vaulted from a sub-35 ranking to No. 10 overall on Chad Ford's big board. Expect him to move up the DX board as well when it gets updated, though Givony doesn't sound quite as sold on LaVine. Chris Johnson of Sports Illustrated wrote up a great piece on LaVine if you want to know more. If you do watch some UCLA games to catch the combo guard in action, be sure to keep an eye on sophomore guard Jordan Adams as well. Kevin Pelton of ESPN likes Adams more than traditional scouts do, and what's not to like about a scorer who puts up 20.2 points per game on 65.9% TS?

This Draft Class is Top Heavy, But is it Deep?

Nobody will argue against the potential value of the top seven players on the board -- Wiggins, Randle, Parker, Embiid, Exum, Smart and Gordon -- but the mix of guys that follow them are a bit more difficult to peg. The distinction between top heavy and deep is usually more important: John Hammond has drafted well during his tenure as GM, but part of the (imposed?) plan has always been to count on other GMs to miss talented players and then snag them in the middle of the first round.

GMs of lottery-bound teams are most mindful of upside when it comes to the draft, so often a hit in the middle of the first round implies a limited ceiling for a prospect, even if you hit a home run. Will Brandon Jennings, Tobias Harris, John Henson and Larry Sanders even combine to collect three All-Star appearances during their collective careers? How about All-NBA nominations? Giannis Antetokounmpo is an entirely different story due to his youth and his obscure origins, and the Bucks are extremely lucky that other GMs in front of them whiffed, but he may be (or already is?) an exception to the rule. Let's stay mindful of the rule.

In any case, the real point I want to make is that it's impossible to call a draft class deep until everyone declares. Plenty of good players withdrew from the process last year. That's why drafting in the middle of the first round can be dodgy when it comes to ultimate upside. Despite the obvious dearth of top talent in the 2013 draft, the depth of the class may turn out to be just fine. Trey Burke (No. 9), Michael Carter-Williams (No. 11), Steven Adams (No. 12), Giannis (No. 15), Dennis Schroeder (No. 17), and Tony Snell (No. 20) look good to me.

When it comes to evaluating the depth of this class, the confusing element is that prospects who pulled out in 2013 have held their position in many cases. Marcus Smart was a top-4 pick on DX and ESPN big boards when he decided to return to school for another year, and now he's in the 6-7 range. Gary Harris was rated 23rd and 10th, respectively, and now he's 10th and 15th. Willie Cauley-Stein has actually moved up from the late first round to the 9-17 range this year. Glenn Robinson III projected in the 16-20 range last year, and the spread is 19-22 this year. Alex Poythress, James McAdoo and Isaiah Austin have dropped considerably since last year, but that may be due to concerns over their lack of development.

Keep an eye on these familiar names as the 2014 draft approaches, because they may help us gauge the depth of the class.

The Early Evolution of the DX and ESPN Rankings 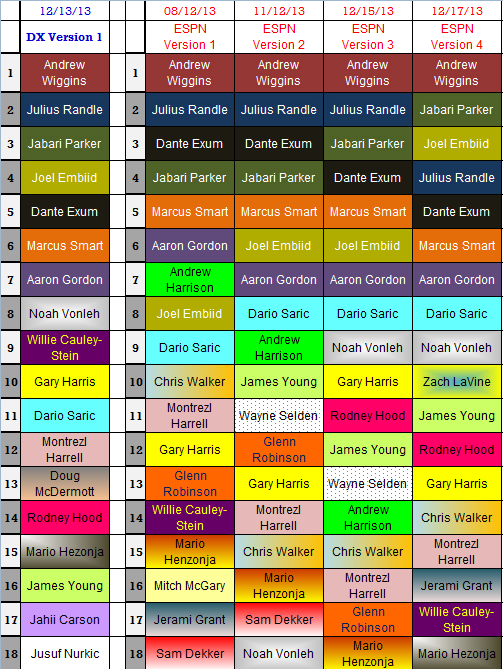 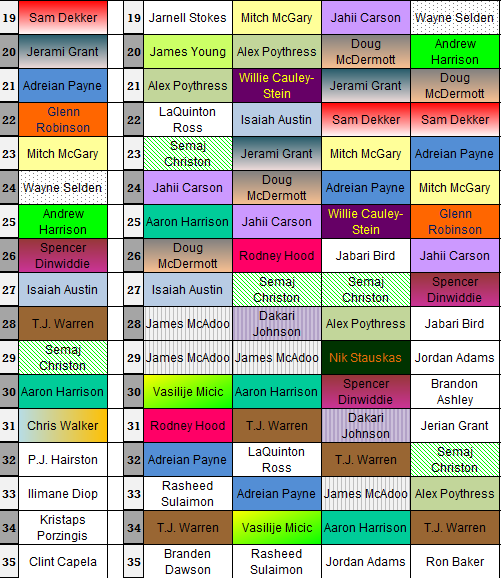